It’s always a pleasure to be back at Hard Rock Hell, and this time it’s for a special one – the 10th anniversary celebration for the undisputed European leaders in residential festivals. As usual there’s a varied line-up across two stages for three days as I cover some of the best performances from the main arena.

With the opening ceremony, The Texas Flood, The Amorettes and NWOBHM legends Praying Mantis already done and out the door early on Thursday evening, I arrive to catch the last number from Belfast’s Sweet Savage, themselves considered one of the pioneers of the new wave of British heavy metal. With Vivian Campbell an original member and Metallica covering their song ‘Killing Time’ I’d hoped to catch more than their set closer ‘Whiskey In The Jar’, but alas the time and distance to North Wales has worked against me. The band I’m really here to see are Vivian Campbell’s current project, so only catching the end of Sweet Savage does have a positive, it confirms that I’ve arrived just in time, for Last In Line.

Last In Line
The formation of Last In Line was initially a chance for three original members of Dio to resurrect the bands classic material. This – before the creation of a new album and the sudden death of bassist Jimmy Bain – was always going to be a Hard Rock Hell 10th anniversary opening night kind of show. Of course there will never be a vocal comparison for the great Ronne James Dio, but Andrew Freeman has a mighty fine rock delivery – proven from the outset with ‘Stand Up and Shout’ and ‘Straight Through the Heart’. Indeed, when it comes to the slow, stomping ‘Devil In Me’ from ‘Heavy Crown’ it’s quite easy to imagine RJD taking up the reins, with all new material played tonight showing great promise for the future. “You probably know a couple of these guys behind me. That’s why you’re here, right?” asks Freeman, turning towards Vivian Campbell. “Play me something pretty” he instructs the guitar hero, who’s looking very well after recent health issues. The guitar intro to ‘Don’t Talk to Strangers’ gets pulses racing and plenty of voices from within the crowd accompany Freeman with his task. Along with Vinnie Appice behind the kit, this is an original Dio fan experience and I for one rack up numerous goose bump moments throughout vintage killer tracks ‘Holy Diver’, ‘The Last in Line’ and ‘Rainbow in the Dark’, all very close to, if not as divine as their original versions. Unfortunately, there’s a badly timed call for stilt walkers to parade front of stage during the new, but classic sounding ‘Starmaker’, the bands dedication to Jimmy Bain. Clearly displeased with the decision Freeman apologises: “Sorry for the distraction while we were paying tribute to our friend” he says, before the band finish up with the ultimate Hard Rock Hell anthem ‘We Rock’. It’s a thrilling set, a powerful performance and a sublime show which I’m not sure how, but the entire festival now has to follow. 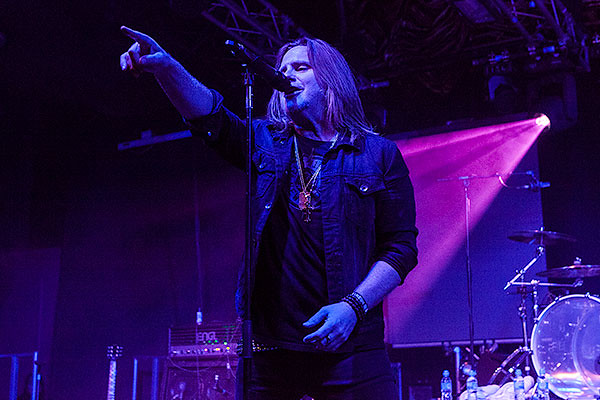 Hayseed Dixie
Whilst I appreciate the superb musicianship and laugh factor of Hayseed Dixie, they were never going to be a band to excite me this weekend. But then again, after the majesty of Last In Line (themselves a tribute band of sorts), the only realistic follow-on could be a band as far removed as possible, and that’s certainly what this rockgrass, hillbilly quartet are. AC/DC tribute act, covers band, whatever you want to call them – Hayseed Dixie definitely have an audience to appeal to, and into the early hours of Friday morning at Hard Rock Hell, those full of booze and up for a good time are certainly not going to be disappointed. ‘Dirty Deeds Done Dirt Cheap’, their own ‘Kirby Hill’ and ‘You Shook Me All Night Long’ get the maniacal party up and running with Hayseed’s flavour of acoustic, banjo, fiddle and mandolin. Main man John Wheeler (aka Barley Scotch) has plenty of banter and gets his first good laugh referring to Coldplay as being “shit” – which let’s face it, cheap as the line might be, was always going to be a winner. From here, each song begins to sound not quite as entertaining as the last. Perhaps it’s just me, here to do a job, tired and sober, but beyond bluegrass versions of ‘War Pigs’, ‘Eye of the Tiger’, ‘Don’t Stop Believin’ and ‘Ace of Spades’, I’m pretty much done. Don’t get me wrong, the crowd here love it – the songs, the banter and Hippy Joe Hymas on mandolin, in his metal patched dungarees, legging it around the stage like a lunatic. It’s all good fun and a great way to end the first night in the main arena, but I’m away early, with those Dio classics running through my head, in preparation for Friday at Hard Rock Hell’s 10th anniversary bonanza, and day one proper.