Welsh rockers Feeder are back with the new album ‘All Bright Electric’ – only released a few days ago – and tonight their Bristolian fanbase are out in force to support them.

Pre-gig it’s lovely to see donations made to the Kerrang! Radio Food Fighters campaign which Feeder are endorsing with food drop points in the foyer of venues on this tour. We drop off our own bag of non-perishable foods and head into a packed O2 Academy to the sound of The Virginmary’s finishing their support set.

I’m always one for letting people know that I booked Feeder to play my local venue, way back when I was doing that kind of thing and when Feeder were on the hunt for gigs. Since that time they have become a popular mainstay of Britsh rock with their anthemic tuneage accumulating a massive loyal following. Even though I say it myself – I guess it was an obvious thing to happen when I heard their demo tape all those years ago.

Kicking off with new tracks ‘Another Day On Earth’ and ‘Universe Of Life’ – the single released back in July – both accentuate the lyrical and compositional journey that Feeder are still travelling two decades down the line. Some fans may not have heard these songs before tonight, let alone been up for the atmospheric, acoustic and piano laden intro to the show, but it’s no surprise to find the new material, along with Grant Nicholas, Taka Hirose and their present company to be welcomed to Bristol with heartfelt sincerity.

In addition to songs from the latest album come those from the entire back catalogue. ‘High’ off the 1997 debut album ‘Polythene’ through to ‘Borders’ from 2012’s ‘Generation Freakshow’ and a little bit of everything in-between, including ‘Insomnia’, ‘Come Back Around’, ‘Pushing The Senses’ and ‘Renegades’. It’s a veritable collection of classic Feeder works for any die-hard fan.

As it stands ‘All Bright Electric’ is number 7 in the UK album chart. Grant of course takes opportunity to thank everybody for buying the album as well as having a laugh about a close run position battle with Craig David. More slices of dominant song writing excellence from the album bring us ‘Eskimo’ and ‘Geezer’. Craig who?

Wrapping up the main set with the beautiful, driving, choker ‘Just The Way I’m Feeling’ and the wholly massive ‘Buck Rogers’ the gig reaches fever pitch, before the band gently coast into the encore with another new number, ‘Infrared Ultraviolet’.

The show is completed with a pure nostalgia fix. Firstly, ‘Sweet 16’ one of several memorable tracks on the first 1996 release of Grand Turismo – this song and memories of the game easily able to jettison your mind back 20 years in a flash. Then to finish is the ever popular bounce-along ‘Just a Day’ from the 2001 masterpiece ‘Echo Park’, with the refrain “All by myself …” who could forget that accompanying cult fan video?

As we head out into the night along with a wide age range of fans, it’s evident that Feeder continue to influence new hearts and minds, as well as retain the audience who have been with them from the beginning. Long may that continue and long may they contnue. 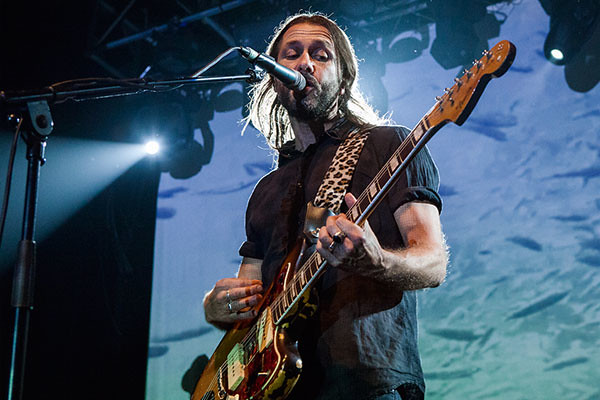