Fronted by Papa Emeritus II with his group of Nameless Ghouls are Swedish progressive/doom metal band Ghost – headining this years Jagermeister Music Tour further to supporting performances from The Defiled and Gojira.

Highly secretive with their identities, but easily recognisable due to their eccentric on-stage personas, the music of Ghost has been compared to bands such as Black Sabbath, Blue Öyster Cult, Mercyful Fate, and Witchfinder General. An intriguing mix-up it has to be said.

The incredibly eerie Romanian chant of ‘Masked Ball’ by Jocelyn Pook is the intro tape, to which the five Nameless Ghouls slowly enter into a – simple but impressive – church interior stage-set. Launching into ‘Infestissumam’ the title track from the new album, Papa eventually joins his mysterious cohorts, skull masked in full papal regalia.

It goes without saying that Ghost are a visual feast. The affectation, the stage and lighting, the costumes and props – as a collective is something to behold. Papa majestically floats around the stage with outstretched hands, his swooning vocal delivered as though a lectionary sermon. His Nameless Ghouls forming an archetypal metal band, albeit anonymous and bizarre.

First time out, it’s hard to know what to make of the Ghost sound. It’s a mix of proggy stomping riffage with spooky fairground swings and waltzes. Throw in bursts of hammond organ, choral society backing vocals and some catchy choruses, and you have what is descriptively speaking a satanic prog-glam metal band.

Second track of the night, ‘Per Aspera ad Inferi’ has a smattering of it all, including the lyric “Oh Satan, devour us all. Hear our desperate call”, which can be sung along to like any hooky Deep Purple number.

The set draws mainly from the debut album ‘Opus Eponymous’ with tracks such as ‘Con Clavi Con Dio’, ‘Elizabeth’, Death Knell’ and ‘Satan Prayer’. In addition, new songs ‘Secular Haze’ and ‘Year Zero’ from the new (April release) album, are given an outing. The congregation, who openly welcome every song, are somewhat withdrawn during the new material, which is inevitable during a first hearing.

Finishing with ‘Ritual’, Ghost return for ‘Monstrance Clock’, before Papa bids his rapturous assemblage farewell by blowing kisses upon them.

And so ends another Jagermeister Music Tour show, for which the variety of bands has been nothing but interesting and entertaining. Coupled with the bargain priced ticket, I can’t imagine there’s a single disappointed punter leaving the venue, who will already be looking forward to more of the same next year. 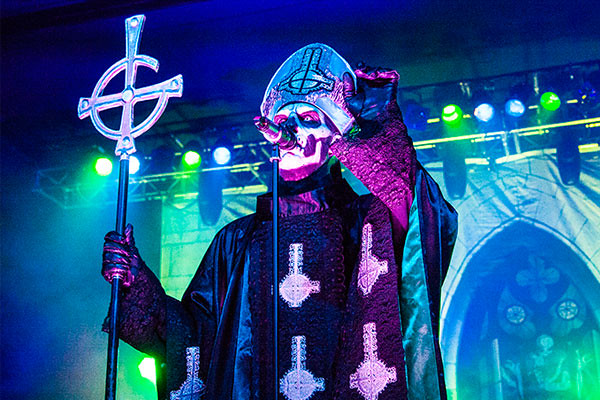