After a couple of pandemic related false starts, Skunk Anansie’s 25th anniversary celebrations have at long last arrived in the UK and tonight at Birmingham’s O2 Academy.

For what has now actually been 28 years. Skunk Anansie have been internationally acclaimed as one of the greatest British rock bands of all time. Skin herself has become one of the world’s most iconic female performers, as well as inspirational role model, activist, trailblazer for women in the music industry, model and muse for designers.

Bounding on for ‘Yes It’s Fucking Political’ – in distinctively madcap, horned headgear – I see no less a performer than when witnessing Skunk Anansie for the first time in 1997. The energetic introduction is ferocious in both visual and sonic delivery, as Skin wields, licks and skilfully plays a Theremin, before entangling herself with guitarist ‘Ace’. The Skunk Anansie live attack cements the snarl and protest of the first ‘Stoosh’ album track, and makes for a cracking set opener.

Flying backwards and forwards Skin uses stage platforms to tower over the front rows. Be it encouraging a mosh pit or showing appreciation for the opportunity to perform again, she flitters between confrontational and ingratiating. Much like the bands catalogue, the audience lap up everything that is fed to them, with the back-to-back smashes ‘I Can Dream’, ‘Weak’ and ‘Twisted (Everyday Hurts)’ being an early highlight.

For all the obvious attention she commands, Skunk Anansie have never been just about their iconic frontwoman. The band as a whole always guarantee a dynamic show with the thundering bass of ‘Cass’ and the energy and presence of Mark Richardson behind the kit. As for ‘Ace’, the man is not only a distinctive guitarist. but a certified educator. Highly regarded in the rock world, it’s well worth diverting attention to his performance at any given opportunity.

While latest singles ‘Can’t Take You Anywhere’ and ‘Piggy’ are given an airing, Skin dedicates ”God Only Loves You’ to her mum, emphasising a need to respect different religions and cultures. However, the main focus remains on the 25 year anniversary, with tracks from debut album ‘Paranoid & Sunburnt’ and the follow-up ‘Stoosh’.

One of numerous singalongs is the emotive classic ‘Hedonism (Just Because You Feel Good)’ followed by the powerful and beautiful ‘100 Ways to Be a Good Girl’. Be it on record or performed live, Skin’s vocal range is unparalleled, with thr ability to sound aggressive yet vulnerable, defiant yet broken. “You guys are amazing!” she says. But oh no, that’ll be you, Ms Dyer.

With a cover of AC/DC’s ‘Highway To Hell’, followed by ‘Brazen (Weep)’ and ‘Little Baby Swastikkka’ to complete what can only be described as a tour de force – it goes without saying that after nearly three decades Skunk Anansie remain right on top of their game. OK, so it may have taken a few years to get here and prove the point, but it was well worth the wait. 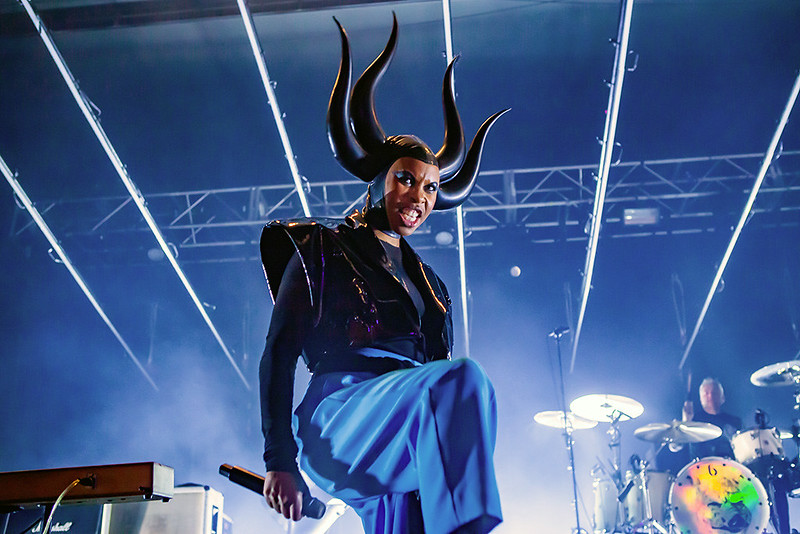