Tonight is an enormous three band show for any classic 80’s thrasher. Having seen Overkill in recent years and losing track of Flotsam & Jetsam since their debut album ‘Doomsday for the Deceiver’, my jaunt to the capital is focused on German titans Destruction. Formed in 1982 as one of the “Big Four” of the German thrash scene (with Kreator, Sodom and Tankard), if I take myself back 30+ years to the impact of ‘Eternal Devastation’ (1986) and ‘Release from Agony’ (1988), I’m really not sure how or why I’ve not seen them until now.

Ten albums on, with drummer Randy Black replacing Vaaver in 2018 and second guitarist Damir Eskic only on-board for a month, I wonder how a 2019 Destruction set will kick off. As the intro to ‘Curse The Gods’ fires up and man mountain Schmier wields his bass and salutes the crowd, the hair on the back of my neck stands to attention. I couldn’t have wished for anything more perfect. The classic opener followed by ‘Release From Agony’ are the merciless attacks they always were, and a pummelling reminder of halcyon days.

I always preferred Marcel “Schmier” Schirmer’s vocal over most other thrash frontmen. His rasping, sneering tone and those short, high pitched screams – he hasn’t lost any of it. With total command he switches from stage left to right for lyrical articulation, although it does prove a struggle when setup in front of the headliners kit. Clearly frustrated he remonstrates: “It’s a sad night when you play the biggest City in Europe on the smallest stage!” before introducing ‘Nailed To The Cross’ from 2001’s ‘The Antichrist’ album.

Founding guitarist Mike Sifringer is the only member of Destruction to feature in every line-up of the band (due to Schmier being fired in 1989 and returning 10 years later). He might be a diminutive figure, but I’ll tell you what – this guy is and has always been a riot of riffs and master of complex structures and lightning solos. Only now, as a four piece, he appears to step back and allow his new shredding partner to shine. Previously contributing three solos to the 2016 album ‘Under Attack’, Damir Eskic demonstrates through gritted teeth and flowing locks his own jaw-dropping technique for fast and furious riffage and guitar solo intricacies.

Released over twenty years apart, the original 1984 ‘Mad Butcher’ is followed by Eskic’s involved ‘Dethroned’, both serving to send the London crowd metal thrashing mad. From ‘Eternal Devastation’ comes the breath-taking, rhythm changing ‘Life Without Sense’ with the occasional crowd surfer now becoming a wave for security to deal with. German precision may be a stereotype, but it’s hard to deny quality management in this short set-list, not to mention the unison head banging and interactions from the trio up front.

There’s more old-school goodness with ‘Total Desaster’ from the ‘Sentence of Death’ EP, before the chainsaw intro into ‘The Butcher Strikes Back’ and a huge dose of Randy Black’s incredible drumming capability and lunacy. Near completion – post the massive riffing of ‘Thrash Till Death’ – Schmier says Destruction will be back in the summer to play more songs. It’s a comment that goes down well, and if tonight’s crowd are thinking the same as me, we’ll all be hoping for headliner shows and with louder sound.

To complete a ten track extravaganza is ‘Bestial Invasion’ from the 1985 debut album ‘Infernal Overkill’. It’s a 100 mph thrashing juggernaut from beginning to end, with Schmier, Mike and Damir giving it a well choreographed three gunner attack into the crowd. Once done and dusted, we’re left to ponder the assault on our senses, material which has stood the test of time, and that unique style which always set Destruction apart from the rest. It might have taken me three decades to get around to seeing them, but if they’re coming back, so will I. 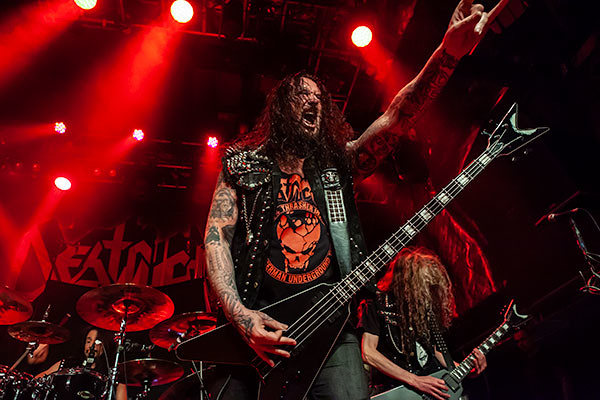