On the back of their sixth studio album ‘The 2nd Law’, I had been hoping this gig would prove to be as spectacular as I had witnessed in previous years from Muse.

‘The 2nd Law: Unsustainable’ makes a wonderfully sedate and climatic show opener, as Matt Bellamy and Chris Wolstenholme unite with drummer Dominic Howard centre stage, to jam out the dubstep influenced number, amid a red wash of erratic spot-lighting on a darkened stage.

The capacity LG Arena rocks out to ‘Supremacy’ and ‘Hysteria’, before the full scale of a stunning stage show starts to become evident during ‘Resistance’. A feast for the eyes is a massive inverted pyramid hanging above Howard’s head, flashing footage and imagery onto individual LED screens. Throughout the show its layers morph into different shapes, eventually dropping down to completely consume the drummer.

From their archive come fan favourites and modern classics ‘Supermassive Black Hole’, ‘Time Is Running Out’, ‘Plug In Baby’ and ‘Stockholm Syndrome’. Frontman and bass player patrol back and forth, with several microphone stands allowing the pitch-perfect Bellamy to take position in various locations, including a stint at the piano for the new track ‘Explorers’, and ‘Sunburn’ from the 1999 debut album ‘Showbiz’.

As a fan of Muse’s earlier albums I have struggled with their latest material, although it has to be said that tonight it all sounded as monumental as any of their previous offerings. From the recent album release they also play ‘Panic Station’, ‘Liquid State’ and the single ‘Madness’, during which lyrics are projected onto the lenses of Bellamy’s sunglasses.

If crowd ecstasy is not reached during the first encore of ‘Uprising’ and ‘Knights of Cydonia’, then they are tipped over the edge during the second wave. The glorious ‘Starlight’ is followed by ‘Survival’ – the Olympic epic, with the full stage production of screen visuals, lights and lasers accompanied by huge jets of smoke, before the band bid Birmingham goodnight.

And what a good night it was. During an ongoing period of financial hardship, 50-60 quid a ticket may be an expensive outing, but nobody can argue that Muse were not value for money. 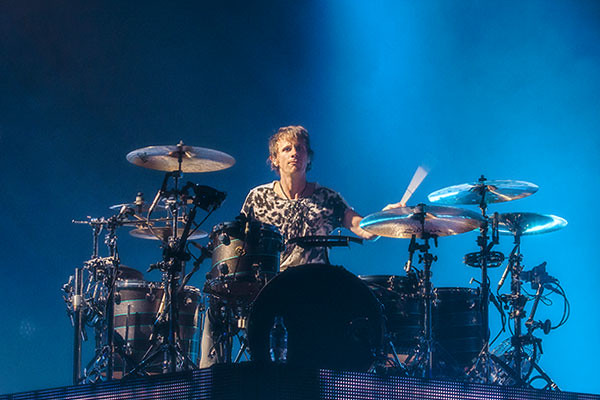