Opening for NWOBHM masters Saxon are the theatrically choreographed Hell, originally formed in 1982, generally ignored and disbanded after five years, to reunite 20 years later with a degree of cult status.

I’ll happily check out Hell purely for my appreciation of Andy Sneap, not only because he’s a great guitarist, but as a fan of Sabbat during their stint in the late eighties and knowledge of his production history. If truth be known I’ve never been keen on the thing that Hell do. But you never know, I may change my mind tonight.

David Bower, wearing his crown of thorns and spooky contact lenses is so animated and OTT that you can’t help but wonder if he’s just having a laugh. It’s almost pantomime but he is pretty absorbing to watch. If nothing else ‘Gehennae Incendiis’ and ‘The Age of Nefarious’ lend some initial persuasion towards the music, if nothing else, being quite serious.

I may not be enamoured with their old school NWOBHM, but the imagery and sound crafting of Hell has to be admired. Sneap’s guitar work does provide technical superiority and Bower’s extravagant mash-up of King Diamond-esque high register and pompous half-spoken vocal does take the material beyond – but not above – classic Priest or Maiden.

Tracks such as ‘Land Of The Living Dead’ and ‘On Earth As It Is In Hell’ are gloriously resolute and it would be unfair of me to suggest I don’t understand how many a metalhead might enjoy them. By the end of this relatively short outing, I may not have become a total fan, but the Hell show has grown on me.

“Until we meet again, may your minds be free and your souls be your own.” says Bower as he slinks off-stage. Sure thing Dave, no matter if we meet again or not, I think that’s something we’re all hoping for. 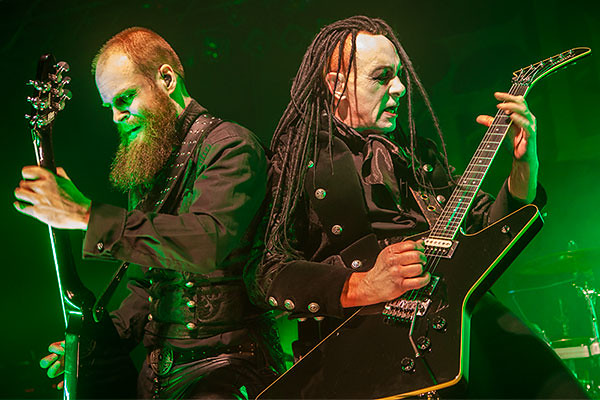