A tour built around rock’s favourite tipple, with a big hitting line-up, and Jagermeister subsidising admission so fans can attend for just £5.00 – the Jagermeister UK Music Tour 2012 was always going to be worth a look.

From Wales come headliners Skindred – an intriguing and intoxicating blend of rock, reggae, metal, dub and whatever else they can throw in. Fronted by Benji Webbe (ex Dub War) the band has only recently progressed from the club circuit, but is almost certainly destined for the big time. AC/DC’s ‘Thunderstruck’ is used as an intro tape, as anticipation builds for the appearance of the ragga-metal overlords.

But things go terribly wrong as the band hit the stage to complete “nothingness”. Everybody is left bewildered by the non-starter, as the guys disappear offstage to return a few minutes later and launch straight into ‘Roots Rock Riot’.

Of course, the delay is completely forgotten, as Webbe whips a packed Bristol Academy into a swirling arm-waving frenzy, following on with ‘Ratrace’ and ‘Cut Dem’. Playing songs from all four of their album releases, the likes of ‘Pressure’, ‘Trouble’ and the encore ‘Warning’ receive the best reactions.

Visually and aurally Skindred offer something different – their live energy is highly accomplished and thrilling to watch. Along with intense, chant-along tunes, the Newport quintet were a top billing tonight, and on the Jagermeister UK Music Tour. 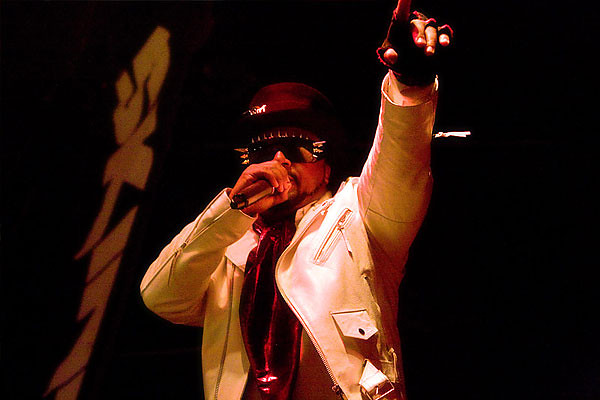