“Apple Core” heroes Acid Reign were as much part of the UK thrash metal scene in the late 80’s as those Bay Area, Teutonic and Brazilian thrashers. Thirty years on and they’re at the inaugural Amplified Festival … in a beer tent.

Ok, so that’s not exactly how it was planned. Original member Howard “H” Smith and his rebooted lineup were set to headline the ‘Very Metal Art Stage’, but due to foul weather of biblical proportions, the frontman and his cohorts are left with no alternative. That’s not to say they care, why should they? It’s a packed beer tent, it’s dry and there’s beer .. of course the show will go on.

All due respect to the Amplified team for thinking on their feet and reacting accordingly at the end of an arduous day. After horrendous weather, with stages shut down and a number of bands cancelled, this could well not be happening at all. I didn’t come here for the same disappointment I felt at last years Hammerfest when Acid Reign didn’t make it because of traffic chaos. But, no matter, it’s on, we’re good to go, and for one night only H informs us – Acid Reign will simply be known as “Rain!”

It all kicks off with the riff-licious ‘The Man Who Became Himself ‘, the recent single which highlights it’s not just about the past for these UK thrash legends. From the 1990 ‘Obnoxious’ album comes ‘Creative Restraint’ and H is off, up and running along the length of the bar – an irresistible route into his captive audience which he’s never likely to ignore.

With the vocal coming to us through a Blackstar amp set amongst the backline, the sound quality is what it is. But in amongst the beer, the sweat and a bunch of old school thrashers going bananas around me, everything sounds exactly as it should. The last time I saw Acid Reign was in 1989 and tonight I’m transported back to my teenage years with ‘Life in Forms’, ‘Phantasm’ and ‘Humanoia’ all punched out with the same mix of aggression and intriguing originality which hooked me and my pals back in the day.

This is almost certainly a one-off scenario, with very little about this gig being the ‘norm’ for Acid Reign. Squeezing myself down the front, against the barrier with my camera – it’s certainly not how I would normally cover a show. But in all honesty, it’s nothing short of brilliant to witness and be part of. The band give it their all, from a corner of the tent, performing on and off a small riser, geeing up the crowd and banging out the tunes, with H leaping around at every opportunity. Fantastic.

New guys Cooky, Paul, Pete and Marc handle all the rhythmic structures and individual technicalities of the predominantly ‘classic’ set with power and precision, along with the antics and humour which have always been a trademark. And just when you think things are surreal enough in rainy Gloucestershire, there comes a marriage proposal on stage. What a place, and what a way to go about it? Fair play to the lass, and when the fella accepts – the packed tent show their approval.

The awesomely, multi-faceted ‘Blind Aggression’ has those in the know stomping around and joining the chorus refrain: “Behind the mask ..” while the Nerve’s ‘Hanging On The Telephone’ gives everybody who know little or nothing about the band something to dance and singalong to. Absolute highlights are left until the end with the neck breaking ‘Goddess’, and that song about our favourite psycho – ‘Motherly Love’ – both from the ‘Moshkinstein’ EP.

I’ve had to wait a couple of years to see the rebooted Acid Reign, and given these circumstances I probably would have turned it down in favour of a “proper” gig. But you know what, this was as proper as it gets. Not only did H & Co accept and play a blinder under the circumstances, they turned the first day of Amplified Festival right around. It was raw, it was energetic, it was everything this new festival needed at a time when it was down on its luck due to factors beyond organisational control.

Over recent years there has been a resurgence of old school thrash metal, with big name bands from the 80’s and 90’s enjoying repeated success. In 2014, the release of ‘The Apple Core Archives’, a retrospective collection of every song Acid Reign ever put out was released. If you like your thrash metal and you’ve not come across Acid Reign before, do yourself a favour. You know it makes sense. UKAC forever! 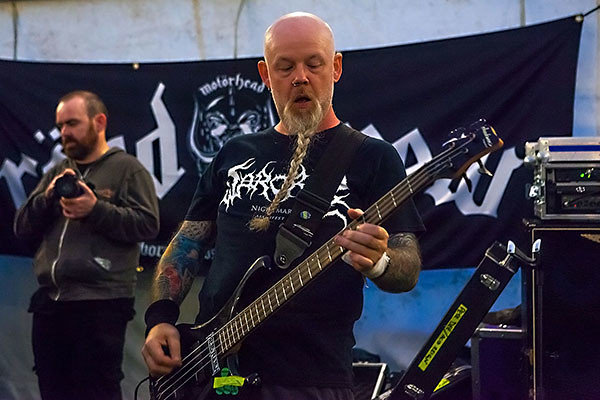