The far reaches of North Wales is a fair distance to travel, but for old-school thrashers “Hammerfest VI: Book Of The Dead” promises a weekend of trusted delights along with a taste of the new.

Pwllheli’s Hafan Y Môr Holiday Park may seem a strange venue in a temperate season, but with a metal community – as mad for it as a March Hare – there’s a warm welcome to a festival that’s all about having some fun. So, arriving on Thursday’s party night (Day 1) my intention is to do just that, catching the back-end of one of Britain’s oldest thrash bands Anihilated, alcohol-driven metallers Death Valley Knights,  shred-heavy metallers Savage Messiah and Tragedy the all metal tribute to the Bee Gees and beyond –  it’s mad, it’s fun and it’s the perfect start to the weekend.

Collisions
Friday is day one proper, and first up for me is Brighton based drum ‘n’ bass metallers Collisions who I heard for the first time only a few days ago. A late afternoon, second stage show proves what a splendidly crafted mix Collisions have got going on. A sparse audience quickly turns into a substantial crowd as their pulse-raising, high-octane set draws in the Hammerfest faithful. Whilst many don’t know whether they should be moshing or dancing, for everybody it’s an energetically compelling collection of tracks, including an insane and potent cover of Bjork’s ‘Army Of Me’ which borders on genius. Finishing with ‘Believe In This’ and ‘Push’ – a full-on rhythmic intensity, combined with the charismatic vocal range of frontman Olly clearly defines a young band with a bright future. This is a taste of the new which Hammerfest serves up, and it’s a dish that comes highly recommended. Gig goers will have chance to check out Collisions must-see stage show after the festival season when they tour the release of their debut album ‘The Cause and the Catalyst’. 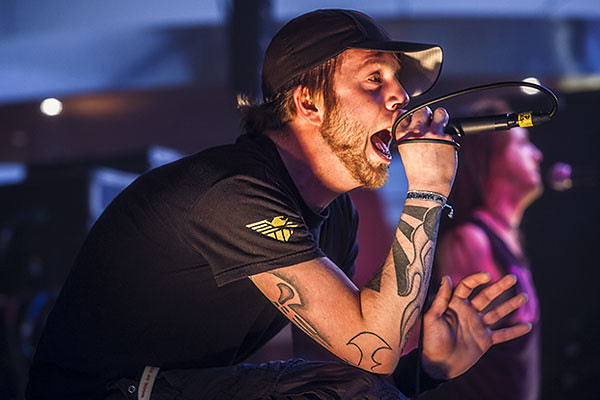 Paragon
The first band I encounter on the main stage are German power metallers Paragon – active since the early 90’s and popular in their homeland. Vocalist Andreas Babuschkin informs us this is their first visit to the UK which probably explains why not too many folk have turned up for them, but it’s not like the band care, as they tear open up with ‘The Legacy’ and ‘Hellgore’. It becomes clear that the Paragon formula is a pretty traditional one, a throwback to mid-80’s speed metal with an inkling of NWOBHM. Tracks such as ‘Gods of Thunder’, ‘Across the Wastelands’ and ‘Armies of the Tyrant’ have a distinct sound, reminiscent of Grave Digger and Accept, with the twin guitar mastery of Wolfgang Tewes and Jan Bertram being highly accomplished and Babuschkin’s vocal aggressive and strong. Old-school metal is much of what Hammerfest is about, and whilst I have no idea why these guys never made it to us before now – I have no doubt that Germany and the rest of Europe will keep them afloat for years to come. 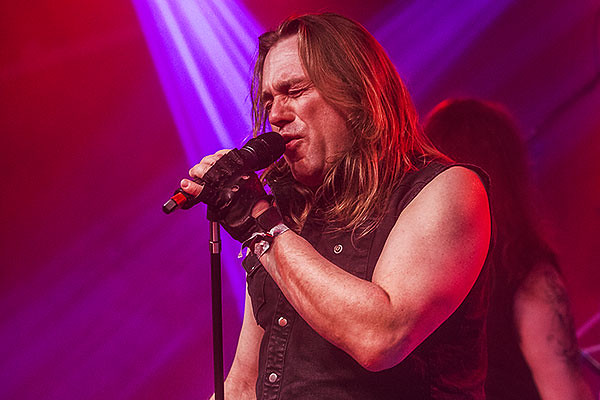 Enthroned
The main stage is known as “Anubis” today, to keep things ticking along with the Hammerfest Egyptian theme. I’m here for the next four bands, this first of which is Belgium black metallers Enthroned. With 20+ years on the clock and a philosophy of refining, not reinventing their blackened majesty – this is one of only a few classic, black metal bands left on the scene. To date, soldiering on relentlessly with a genre of music which has been developed by so many, does make for a terribly uninspiring catalogue. That’s not to say their older material didn’t have its time, and some of what we hear today is beautifully brutal and vitriolic. However, it does becomes evident, as song after song is churned out, that each is recycled from a template devised back when Enthroned were once at the peak of their game. There will be devout black metal fans that champion Enthroned for staying true and stick with them until their final days – although there doesn’t appear to be too many of them here this evening. 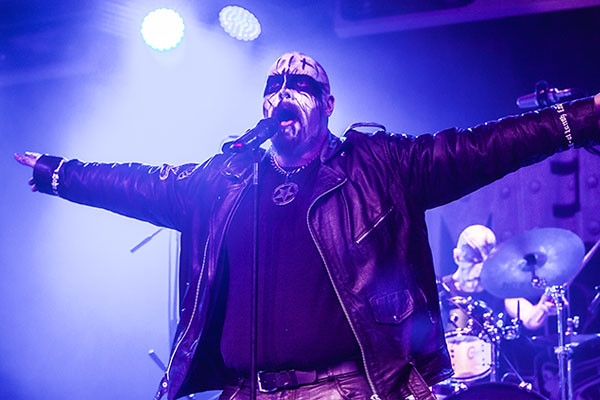 Grand Magus
It’s time for a Swedish masterclass! I know this because I’ve previously had the pleasure of Grand Magus at Bloodstock Festival 2012 and more up-to-date with their latest album release ‘Triumph and Power’, which I gather from many is their strongest and most balanced collection of songs to date. The trio storm into action with ‘Kingslayer’ and ‘Sword of the Ocean’, with frontman/guitarist Janne “JB” Christoffersson taking a moment between tracks to put down his Gibson Flying V and raise his fists to the crowd. The response is huge with fists and horns thrown back in anticipation for more of the same. Grand Magus work in perfect coherence, belting out a selection of powerful hooks and inspirational anthems. Bursting with quintessential bluesy rock riffs of classic metal bands such as Judas Priest – the set includes ‘I, The Jury’, ‘Ravens Guide Our Way’, ‘Triumph and Power’ and ‘Steel Versus Steel’, with Fox Skinner and Ludwig “Ludde” Witt bolstering the solid guitar work and vocals of Christoffersson. Grand Magus are old school heavy rock, devoted to the style, yet sounding wonderfully fresh. Finishing up with ‘Iron Will’ and the driving ‘Hammer of the North’ – the packed crowd rock along with them to the end, confirming a triumphant show which matches up to those who motivated it. 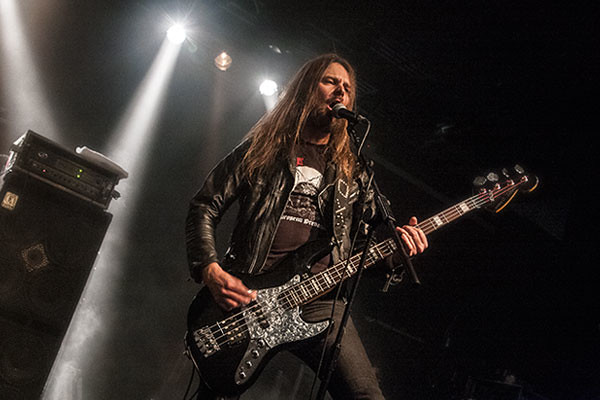 Soilwork
Next up is another Swedish offering, Soilwork who along with the likes of At the Gates and In Flames have been a significant force in creating the Gothenburg sound synonymous with modern melodic death metal. Their popularity is evident, with a large crowd in attendance as the band are led by their towering frontman Björn “Speed” Strid who takes command with: “Make some fucking noise Hammerfest!” Kicking off with ‘This Momentary Bliss’ with its Maiden-esque dual guitar intro from David Anderson and Sylvain Coudret, followed on with a perfect blend of aggression and melody, Soilwork rampage through a technically excellent and flawless show. The set is a mix of older tracks and those from last years’s double album ‘The Living Infinite’ which many dub their best material since ‘Natural Born Chaos’ (2002). Ferocity and refrain is the order of the day, with ‘Spectrum of Eternity’ and ‘Follow the Hollow’ proving particular crowd pleasers. Coudret and Anderrson keep up their scintillating shredding, and along with bassist Ola Flink they utilise every inch of the stage. From an ‘on-the-fence’ perspective, individual tracks are pretty amazing, but there does come a point of being able to predict the same thing over and over again. Whilst the crowd is sent into a frenzy as ‘Stabbing The Drama’ completes a superb performance, I think it’s fair to say that Soilwork are true masters of their art, even if this particular art may be a little too formulated for me. 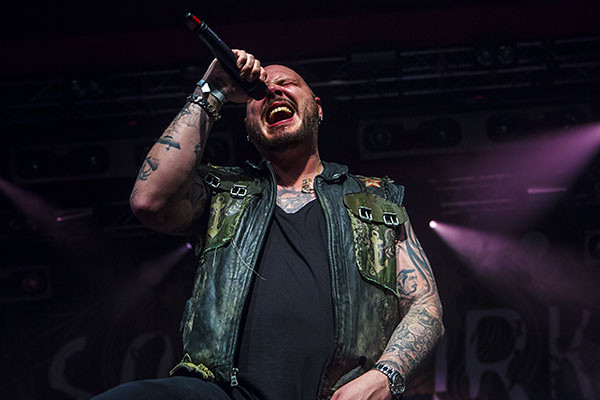 Overkill
New Jersey thrash legends Overkill are Friday night headliners on the main “Anubis” stage. Formed in 1980 and achieving succes at the same time as their contemporaries Anthrax, Exodus, Metallica, Megadeth, Slayer and Testament, and having released 17 studio albums to date, this is the band many Hammerfesters have been waiting for all day. We are treated to a set mostly of Overkill classics from their first decade – including ‘Wrecking Crew’, ‘Hammerhead’, ‘Rotten to the Core’, ‘Hello from the Gutter’, ‘In Union we Stand’ and ‘Elimination’. The band, the sound and the songs are lewd, crude and full of fun, with newer tracks like opener ‘Come and Get It’ and ‘Electric’ Rattlesnake’ standing up alongside tunes from their heyday. Frontman Bobby “Blitz” Ellsworth is in fine sneering form talking to the crowd like long lost friends. This is a guy in his mid-fifties, who has suffered and survived an aggressive form of cancer and a stroke – but along with fellow original member bassist D.D. Verni and the rest of the band – has a vitality and endurance for the old-school thrash sound, undoubtedly driven by the enthusiasm of the crowd. Overkill provide Hammerfest with a highly entertaining end to the night, completing their set with ‘Horroscope’ and The Stiffs (often mis-quoted as being Subhumans) punk classic ‘Fuck You’, it’s a performance that would put many a new band to shame. 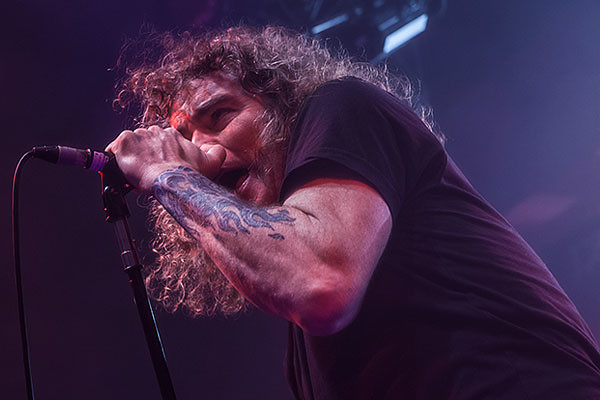 Feed The Rhino
As folk head away from main stage, there comes a ferocious sound from the “Off Yer Rocka” stage – Kent’s much talked about hardcore punksters Feed The Rhino – a band packed-full of massive riffs, crazed vocals, and colossal tunes. Frontman Lee Tobin leads a raging performance – into the crowd, up the PA stacks, back and forth, into the crowd again, he’s here, there and everywhere, and the kids down the front – they love it, of course they do. I’ve always been into my fair share of fierce tuneage, so it’s impossible not to identify and rate what I’m hearing. Material from their critically acclaimed debut album ‘Mr Red Eye’ – both the title track and ‘The Butchers’ are massive, as are the title track and ‘Nothing Lost’ from the more recent ‘The Burning Sons’. The showmanship is as hard-hitting as the sound, and for a first-timer like myself it cannot make for anything but performance of the day. The intensity of it all, the power and exhiliration of the entire band, the swung guitar routines from brothers Sam and James Colley, the all encompassing dominance of stage and crowd from Tobin, the surfing, the circle-pits, the frenzy, it’s passionate brutality to the end. Regardles of your take on the music Feed The Rhino are definitely a live band worth experiencing. At around 2am Hammerfest has plenty of punters, pumped full of adrenaline, with that performance etched in their memory for some time to come. 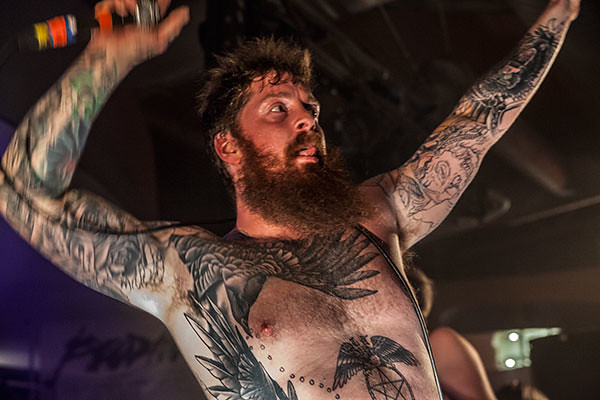