After the previous evening’s assault on the senses, only a cognitive hair of the dog will do. So without delay it’s time to get up and at ’em for day two of “Hammerfest VI: Book Of The Dead”.

Derision
Before taking to the hierarchy of the main stage today I start where I finished in the early hours of this morning – at the “Off Yer Rocka” stage. I’m here to check out Derision. who have garnered positive reactions across the metal media, not least from Metal Hammer Editor Alexander Milas who has described the band as “phenomenal”. There’s no doubt about it, Derision are scintillatingly hard and heavy. This is no-nonsense, skull-battering metal, with frontman Tony Smith giving his all – both vocally and from banging his head hard enough to rip it off. That’s not to say the material isn’t dynamic, because it is. One of numerous stand-out tracks is ‘The Ancients’ with a fantastic ebb and flow of ferocity and stompability, which is then dappled with a soothing guitar bridge. With brutal riffs, unpredictable song writing, not to mention a blistering cover of Sabbath’s ‘Children of the Grave’ – the only downside for me would be their early billing. 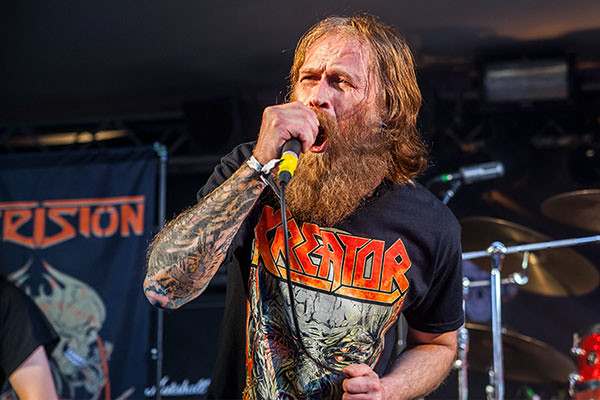 Breed 77
Continuing the Egyptian theme – main stage is known as “Horus” today. The first band I witness upon this deity is London-based Gibraltarian’s Breed 77 who are with original vocalist Paul Isola to commemorate the 10th anniversary of the band’s most successful album ‘Cultura’. They kick off with ‘Individuo’ and ‘Calling Out’ from that release. A fusion of alternative metal and Mediterranean influences make Breed 77 a totally different proposition when compared to other bands on the Hammerfest line-up. It’s a baying audience which confirms their popularity as they rip through a magnificent set which includes ‘Worlds On Fire’ complete with Flamenco intro, ‘Final Prayer’ and the absolute epic ‘Floods’. The Hammerfest crowd is at fever pitch for the Cranberries cover ‘Zombie’, and as the performance is completed there is plenty of talk about the Breed 77 set being the best of the weekend so far. 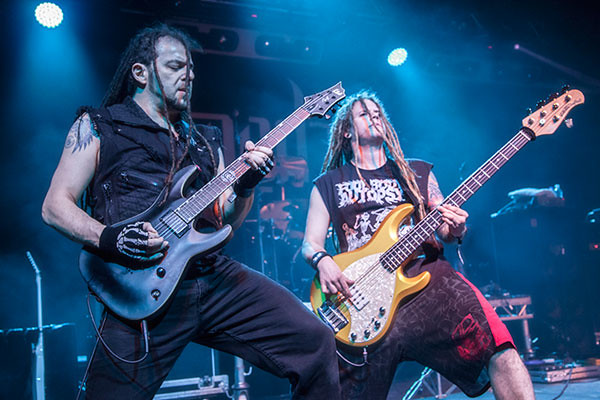 Gloryhammer
Founded by Christopher Bowes, the mastermind behind pirate-metal sensation Alestorm, Gloryhammer are a symphonic, fantasy, power metal band who bring epic tales of fictional Scottish history. Yes, really!  Lead by vocalist Thomas Winkler as the character ‘Angus McFife’ – the debut album ‘Tales from the Kingdom of Fife’ is played in full. It tells the story of the great hero McFife waging an epic war against the evil wizard Zargothrax (characterised by Bowes on keyboards), to free the people of Dundee in the name of glory and steel. Presenting themselves as a tongue-in-cheek, parody of stereotypical power metal bands, it’s hard not to bask in Gloryhammer – the material and performance being pure entertainment from start to finish. ‘Quest for the Hammer of Glory’ has Winkler splitting the audience for chants of ‘Ride’, ‘Fight’ and ‘Quest’ which has the entire Hammerfest crowd involved – and to be honest it’s pretty impossible not to enjoy. The serious good fun rolls on through the epic cheesiness of ‘Silent Tears of Frozen Princess’, ‘Amulet of Justice’ and ‘Beneath Cowdenbeath’. As ‘The Epic Rage of Furious Thunder’ and ‘Wizards’ bring a solid performance to an end, I don’t think anybody is really sure exactly how to take Gloryhammer – which is the absolute greatness they possess. All hail Gloryhammer! 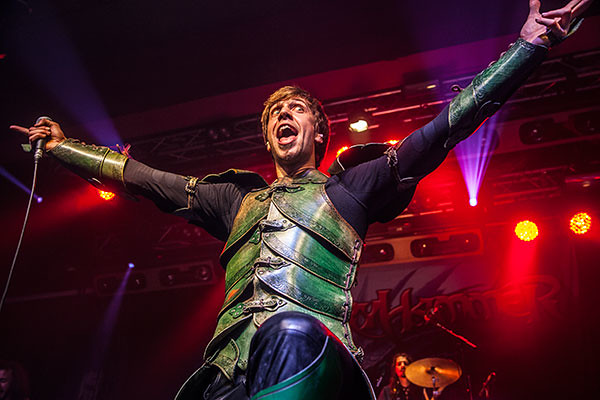 Monster Truck
I wasn’t sure if Canada’s Monster Truck may be out of sorts at Hammerfest today, but very quickly it becomes clear their brand of solid rock ‘n’ roll is cross-genre appealing. Opener ‘The Lion’ roars out across Hammerland, quickly followed by ‘Undercover Love’, both foot tapping, fist pumping tunes – a perfect introduction to the band and Jon Harvey’s soaring vocals. The Monster Truck set is pretty much a fast paced, dirty affair. A vintage sound embracing the Hammond organ of Brandon Bliss, yet with the heavy groove-laden riffs of Jeremy Widerman and Harvey’s driving bass, its an established presence which never becomes overwhelming. There’s a unique fusion of influences going on here – a simple, classic rock sound bathing in an original listening experience. The high energy show includes a couple of well orchestrated “whoah-oh” sing-a-longs in ‘Old Train’ and ‘Righteous Smoke’ which have the crowd indulging themselves. ‘For The Sun’ is a slower, blues-infused track, full of ambience and a soulful vocal delivery. The emotional chorus “Time rolls by me like the wind and I’ll keep flying ’til the end” and the thumping drums of Steve Kiely keeping it heavy as hell. Monster Truck is a heavy vehicle, performing a mighty fine show and capable of rolling over anything that might get in their way. 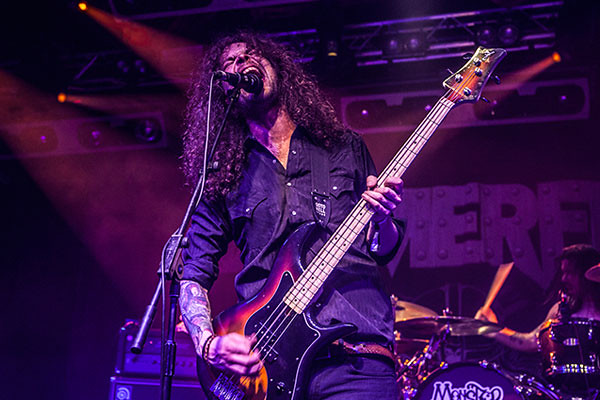 Unleashed
For anybody who may be craving something much heavier than the previous two bands appearing on “Horus”, there comes the perfect answer – Swedish death metal pioneers Unleashed. Formed in 1989 by bassist/vocalist Johnny Hedlun – who introduced viking traditions and values into death metal and has stuck to these roots for the past three decades – this is going to be brutal, full throttle stuff. An impressive turn-out in advance of Unleashed’s set makes for a sea of banging heads as the band pile in with ‘Blood of Lies’ and ‘Legal Rapes’. These openers are at break-neck speed, heavy and intense, with just enough melody to hold together the depths of an overall ‘nasty’ sound. There’s a brief pause before the ‘The Longships Are Coming’ offers a reprieve on speed, but only a temporary battening down of the hatches. The set progresses with material from the bands eleven studio albums. There’s a boatload of dark aggressive riffing and pummelling blast beats, but along with Hedlun’s deep, gravelly vocal – the stories being told are still distinguishable. Ok, so I won’t be going home at the end of this weekend to listen to more Unleashed, but I have to say this is a great live band at the extreme end of the metal spectrum. They show no sign of slowing down and today they have totally crushed and conquered the Hammerfest masses. 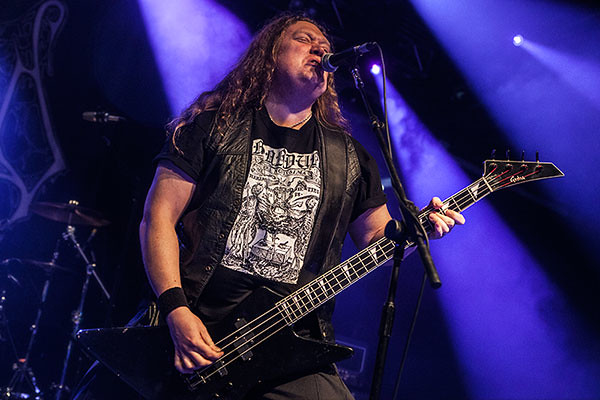 Corrosion of Conformity
Corrosion of Conformity formed in the early 80’s – originally a hardcore outfit they evolved into a slower, stoner rock band, focusing on heavier songs with bluesy riffs. Regarded as pioneers of this crossover, they have endured numerous line-up changes, but the trio of original members: guitarist Woody Weatherman, Mike Dean on bass and drummer Reed Mullin are still hard at it 30+ years later. As the North Carolina legends hit us up with ‘The Moneychangers’ it appears that Dean is struggling with his voice, but as the band mix it up with songs from across their discography, Dean’s vocal improving as the set progresses. Early hardcore tracks like ‘Loss for Words’ and ‘Holier’ join hits such as ‘Deliverance’ along with ‘Psychic Vampires’, ‘Rat City’ and ‘The Doom’ taken from the eponymous 2012 album. The material is well paced and blended as the mad axeman Woody Weatherman circles and sways across the stage. Varying between slow, swampy riffs with thrashy intervals and shredding solo after solo, the bearded giant is an entertaining watch, leaving Dean to growl out the vocals to the closing trio of tunes – ‘Mad World’, ‘Hungry Child’ and ‘Priest Brains’. Corrosion of Conformity leave the stage as quickly as they arrived, and as the final notes of their 1987 release ‘Technocracy’ ring out – the Hammerfest crowd bids farewell to a critically acclaimed band who should be required listening for any exploratory fan of rock music. 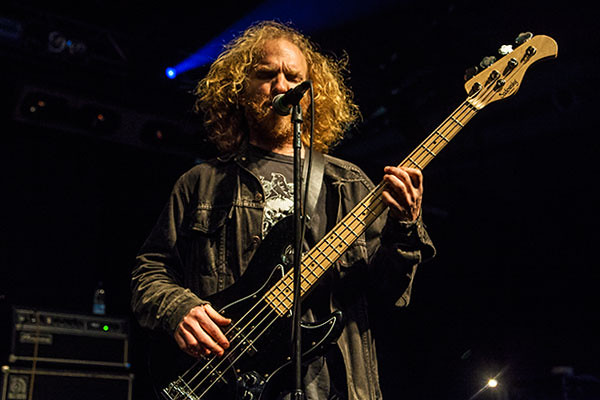 Kreator
We come to the grand finale with German speed metal titans Kreator. Formed in 1982, with thirteen studio albums under their belt, Mille Petrozza and company have the main stage arena full to capacity as the intro ‘Mars Mantra’ fires everybody up for a classic Teutonic thrashing. Off and flying with ‘Phantom Antichrist’ – the title track from their latest album – Kreator show no signs of slowing down. This is no less hard hitting than when I first saw them back in the mid-eighties. Mille needs no encouragement in riling the masses into a frenzied circle-pit. Another newer track – the massive, anthemic ‘From Flood Into Fire’ shows exactly how Kreator have progressed yet remained true to their old-school thrash style, before a set stretching back and forth through the years is performed with the power, passion and aggression which Kreator have always delivered. ‘Warcurse’, ‘Pleasure To Kill’, ‘Enemy of God’ and ‘Phobia’ are particular highlights. Although I may be gutted to hear nothing from one of my favourite albums of bygone years: ‘Terrible Certainty’ (1987) –  Kreator still steal the weekend by a country mile. The crystal clear sound production and visual show is well worthy of a headline act, all topped off with exploding pillars of smoke for ultimate grandeur. Mille thanks the crowd for making Kreator’s first gig of 2014 “a very special one” before a short history of ‘Flag of Hate’ which includes a mention of Michael Jackson and Judas Priest! Eventually the classic track is played before ‘Tormentor’ completes a knockout show. 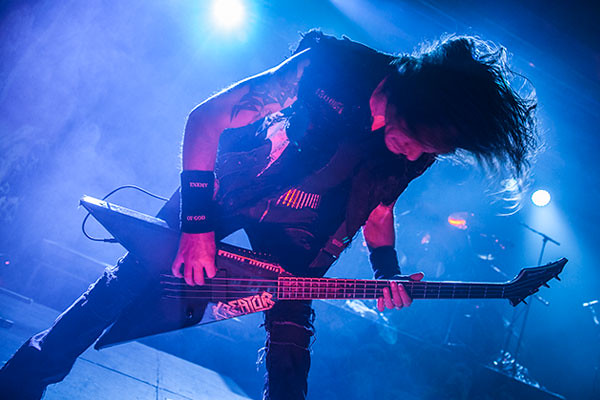 The “Off Yer Rocka” stage continues into the early hours with Avatar and Primitai – who’s brief mention, along with the likes of The Bastard Sons, Gravil and Druganaut – I hope doesn’t make me sound lazy. Covering the weekend alone, it is unfortunate that I don’t get time to see them all, but you can be assured that Hammerfest 6, like all Chic Talent festivals, features a wide ranging, wealth of talent. Until the next one!