Further to a short UK run back in February, these last few days have seen the band play gigs in Belfast and Dublin and a huge show at London’s Hyde Park as part of the British Summer Time festival. But now – absolutely rammed inside Sheffield Arena – this is where it’s at. With a baying Yorkshire crowd giving it their all along to ‘Bohemian Rhapsody’ and ‘Blitzkrieg Bop’, you just know this is going to be massive.

As ‘The Good, the Bad and the Ugly’ fades out, the blue-haired Tré Cool dances onto stage to screams of delight, before bassist Mike Dirnt and the uncontrollably energetic Billie Joe Armstrong join him. Hitting us up with ‘Know Your Enemy’, it’s during the first track that Billie Joe has a fan pulled up to sing the final verse. The lad does a good job, before being encouraged to run the length of the runway for a stage dive back into the crowd. It’s a great start to what becomes a two-and-a-half-hour, twenty-six track, tireless masterclass in crowd pleasing showmanship.

Along with a trio of touring members, Green Day belt out a set-list which just about covers their quarter century plus album discography. ‘Boulevard of Broken Dreams’ is the first real breather as Billie Joe dedicates it to everybody here – a song “for all us weirdos, freaks and strangers” he says. It’s a starry-eyed moment for plenty of youngsters, although perhaps blurred for many when Billy describes their use of phones as “like cancer” and “as addictive as heroin”. Although he does make a good point.

“Any old school Green Day fans here?” enquires Billy Joe, before welcoming Mike Dirnt during the bass intro into ‘Longview’. It’s during the debut single from ‘Dookie’ that another fan is pulled up to sing the last verse. This guy does really well, a performer already in the making it would appear.

Track-after-track is delivered with captivating buoyancy – the politically charged ‘Holiday’, ‘Youngblood’ one of several tracks from the latest album and ‘Hitchin’ a Ride’ the first single off of 1997’s ‘Nimrod’. There’s even one for “real” old school fans with ‘Paper Lanterns’ off the ‘Slappy’ EP.

Amongst the mesmerising light show, backdrops, flames and explosions, Billy Joe hoses down the crowd and fires tee-shirts the full length of the arena. During ‘When I Come Around’ I swear that every single pair of hands in the 13,500 capacity venue are in the air, and when he tells Sheffield to “jump”, it feels like the entire Steel City is obeying his command. He has this huge crowd eating out of his hand, apart from when they let him know that this is “Yorkshire! Yorkshire! Yorkshire!” – mistakenly and amusingly interpreted by Billy as being called a “cock sucker”.

While the main man has never been known to shy away from sharing the bands political views, it seems to be pretty much on the back burner tonight. Yeah, there’s the mention of our freedom to self-expression and so on, but there’s no ranting or chanting. The 45-year-old displaying an impressive feat of stamina and clearly enjoying himself, during what he describes as one of his “favourite ever shows”.

A circle pit opens up during ‘Welcome to Paradise’, there’s full accordion and harmonica accompaniment to ‘Minority’, before another fan is up onstage to play guitar along to the Operation Ivy cover ‘Knowledge’. This lucky lady – “Eleanora” – not only gets to play with Green Day, but also gets to keep the guitar. Wow! How’s that for a fan participating show?

Even though Green Day have ventured down many paths over the years there’s no song that’s more representative of the band than ‘Basket Case’ – the prime punk-pop track almost tearing the roof off. But still there’s still more to come with ‘She’ and ‘King for a Day’ featuring a fantastic sax solo from Jason Freese, including a tribute to George Michael with the riff to ‘Careless Whisper’.

Of course, there comes the introduction to “the world’s most dangerous drummer” with Tré Cool out from behind his kit doing high kicks before the band lie down and have the crowd in full voice for a medley of covers: ‘Shout’, ‘Teenage Kicks’, ‘Always Look on the Bright Side of Life’, ‘(I Can’t Get No) Satisfaction’ and ‘Hey Jude’.

‘Still Breathing’ and ‘Forever Now’ bring the main set to a close before an encore of ‘American Idiot’ and ‘Jesus of Suburbia’ leave all of those here – young, old and older – totally annihilated with passion, excitement and energy. Billie Joe returns with an acoustic guitar for a calming end-of-show ’21 Guns’ and ‘Good Riddance (Time of Your Life)’ with Mike and Tré joining him at the end.

You can read it anywhere, that Green Day are one of the greatest live bands of all time. But not until you see it, hear it and feel it do you know that for sure. Never has a song lyric been more appropriate as a show finisher. “It’s something unpredictable, but in the end is right, I hope you had the time of your life”. It is, it was, and we did. Cheers Green Day. 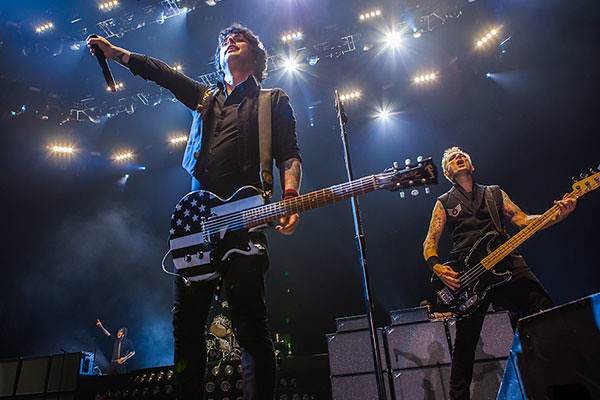