Since the first show at Sweden Rock in June 2016, the Michael Schenker Fest project has gained some real momentum and tonight Sheffield plays host to the second of a four night UK assault.

Reuniting the original Michael/McAuley Schenker Group vocalists – Gary Barden, Graham Bonnet and Robin McAuley, plus MSG musicians Steve Mann on guitar and keyboards, bassist Chris Glen and Ted McKenna on drums, Michael Schenker Fest is kicked off by Schenker himself with ‘Into The Arena’. Our guitar hero, in his trademark beanie, back-lit by a bright red MSG logo, transports us back to the very start.

“Are you ready Sheffield?” screams Schenker. “Please welcome Mr. Gary Barden!” And with that, the original voice of MSG takes to the stage. Behatted and casually attired, he belts out a string of classics which include ‘Victim of Illusion’, ‘Cry for the Nations’ and ‘Armed and Ready’. Talking of his pride having co-written songs such as ‘Attack Of The Mad Axeman’, Barden is clearly enjoying the spotlight once more, with an excellent vocal that the crowd are more than happy to sing-along with.

Schenker and his three trusted sidekicks crank out a version of the Scorpions instrumental ‘Coast To Coast’ before the arrival of Graham Bonnet. Sharply dressed in a pink jacket he launches into ‘Desert Song’ and proves undoubtedly that he pretty much has still got “it”. Not perfect on some of those higher notes, but certainly a huge improvement compared to what I witnessed twelve months ago at Hard Rock Hell.

Reliving his last time in Sheffield with MSG and his only gig with them (if you don’t know the story – look it up!) Bonnet admits “I pulled something out that I shouldn’t have!” before having a laugh and whipping out a banana! With backing vocals from Barden and Mcauley on ‘Dancer’ and a fantastic version of ‘Assault Attack’ he further admits that back in 1982 he was “very young and very drunk”. Tonight, like any other night, the adoring fans forgive him, and he leaves the stage to a massive ovation.

‘Captain Nemo’ gives the guitar maestro a little time to shred and astound us prior to the introduction of Robin McAuley, who looks the most “dressed to rock” next to Schenker. Opening with ‘No Time For Losers’ followed by the thundering ‘Save Yourself’, McAuley looks and sounds on top form. “It’s been a long time!” he confirms before ‘Bad Boys’ and ‘Love Is Not A Game’ continue to show-off his present day vocal capability. Not that his voice seems to be what he is most proud of. “It may have been thirty years, but I’ve still got my hair!” he says.

Completing McAuley’s section of the show with UFO’s ‘Rock Bottom’, Schenker holds the crowd in the palm of his hand with a mid-song solo spot. It’s nothing short of mesmerising, technical wizardry. We behold a true, legendary, guitar god, before the song and main set comes to an end.

All three vocalists return for ‘Doctor Doctor’, sharing the vocals and lining-up centre-stage. It sends Sheffield’s O2 Academy into a bouncing frenzy, an incredible finale for the entire band to soak up. All of this, before the third and final UFO classic ‘Lights Out’, which carries us all to the finish line.

Tonight, Michael Schenker Fest proved itself to be an enjoyable event from beginning to end, for everybody involved. An evening of nostalgia, an evening of fun, and with plans to continue the project into the future, it’s one for any old MSG fan not to miss the next time around. 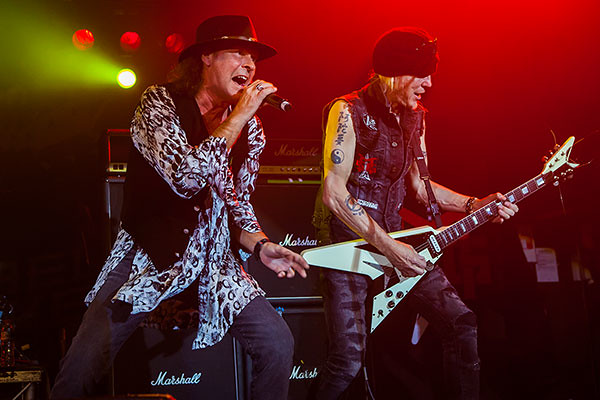