We’re back at Birmingham’s O2 Academy for the second instalment of the inaugural HRH Metal festival. As is usually the way with these things, Saturday night excess has thinned the Sunday herd and those who have bravely presented themselves are looking decidedly jaded.

However, as always, metal fans are a hardy lot and HRH have catered for every eventuality by laying on an early menu of less challenging Sunday lunchtime viewing. London outfit Pythia romp through a fine set of neo-goth metal, before Primitai entertain everyone with a bit of metal pomp and grandeur, which eases us all back into a more stable physical and prepared state. HRH don’t just throw these things together you know.

Winterfylleth
Manchester’s Winterfylleth have come with no such regard for anyone’s physical condition, fragile or otherwise.  They line up and use ‘The Swart Raven’ as a launch pad into a solid hour of homegrown death metal. They look pretty nondescript in fairness, but imagery isn’t really Winterfylleth’s stock in trade. They are here to simply let their music do the talking and it screams excellence from the very rooftops. The supersonic metronome drumming of Simon Lucas is stunningly precise and cradles the tidal wave brilliance of Dan Capp and Chris Naughton’s guitars in its embrace. Bassist Nick Wallwork survives some mid-set technical drawbacks and backs up Naughton’s fine vocal performance with some sturdy voice work of his own. Winterfylleth are a rabbit hole of a band, and bit by bit we are all drawn into their vortex by resounding numbers ‘Forsaken in Stone’ and ‘Warrior Herd’, before ‘Whisper of Elements’ delivers a death by strobe climax to an impressive enactment of our cultural heritage. 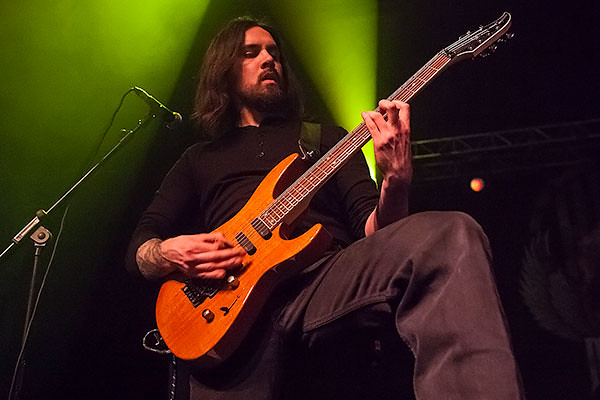 Hell
Talking of cultural heritage, we Brit folk love a bit of theatre and drama on a Sunday evening, don’t we? As luck would have it Metal thespians Hell have made the short leap over from the East Midlands to provide us with that very thing. But this is no generic, mainstream Upstairs Downstairs or Lovejoy fodder – no, this is straight out of every Hammer Horror movie you ever saw or any Edgar Allan Poe novel you ever read, set to an eclectic soundtrack of metal through the ages. Chief protagonist David Bower punctuates every syllable of ‘The Age of Nefarious’ and ‘Let Battle Commence’ with one dramatic hand gesture after another.  By the time we reach ‘Something Wicked This Way Comes’ you stop noticing he does it at all.  The rest of his ghoulish looking cohorts commune regularly centre stage to engage in some unholy-ish preconceived mosh moves. If you don’t take it all too seriously it’s a right old giggle and hugely entertaining. If you do, well, there are other bands on other stages – thankfully. Whichever way you look at it, it is enjoyable, a visual spectacle and a nice change of pace from serious metal making.  Bowers leaps into the pit, laying his hands upon the congregation, exorcising the evil spirits that Alka-Seltzer could not (other equally ineffective hangover cures are available).  He strides about the stage in a ten foot tall Beelzebub costume. However, it does seem that a pastiche of “the Big L” comes not without its drawbacks, as the horned one doth smite Bowers with some microphone difficulties for his cheek.  It does appear to just be a warning though, as the rest of the set proceeds without a hitch and ‘On Earth as it is in Hell’ brings a diverting – albeit a tad silly – show to an end. 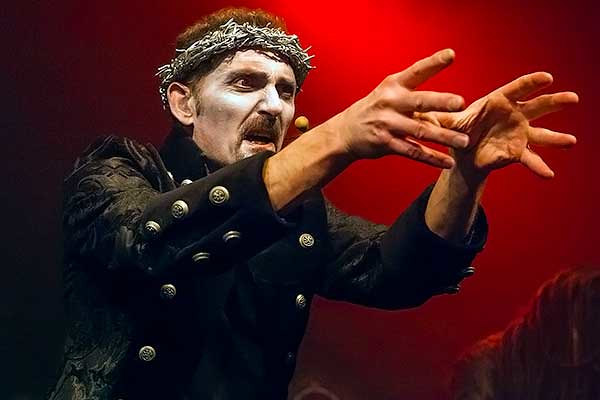 Lawnmower Deth
Before anybody extricates their tongues out of their cheeks the theme from The Muppet Show signals the stage invasion of Lawnmower Deth. The next hour or so goes something like this: Dear diary… Today I saw a band called Lawnmower Deth, they had some scary looking clowns. The clowns were nice though because they gave out big balloons for the people to play with. The balloons all got popped. The people downstairs were made to say hello to the people upstairs. There was a funny looking sheep with dreadlocks that was chased around the stage by a shepherd. The shepherd caught the sheep and put him in the “Deth Shed”. The shepherd pretended to kill the sheep and he got covered in pretend blood. It made a mess. One man in the band showed he had an unhealthy obsession with ducks and another man in the band showed he had a bad memory because he forgot how to play his guitar.  Lots of the people watching ran at each other from opposite sides of the room and banged into each other, very hard.  The singing man told everyone to hug each other and tell them that they loved one another, so they did.  Then the people did a big conga and a Mexican wave everywhere because they were now buddies. The singing man made fun of everybody, especially his mates in Hell and Skindred. We all laughed. In the end everybody clapped and cheered because it was really good fun. Oh and the band played about a hundred songs, some of which only lasted about ten seconds. The end. Apart from that, nothing really happened. 🙂 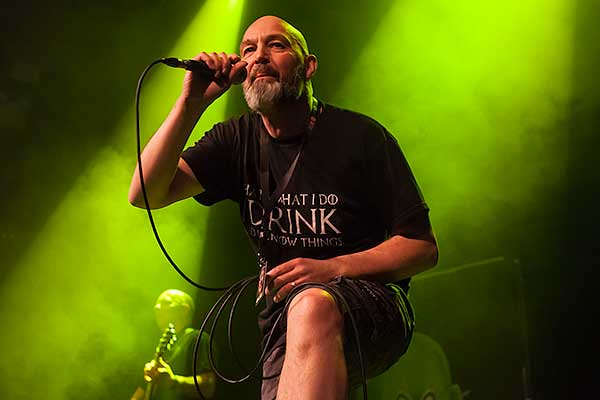 Sodom
To survive in this multi-faceted music minefield you need to have the best ammo you can muster, or be impervious to the deluge of slings and arrows you will face along the way. In other words you’d better be some badass sons of bitches if you wanna rock n roll and stay doing it for more than a month or two. Sodom are all of these things, they are the epitome of a blue collar grit and determination to break free, and they have nearly forty years of existence behind them to back up that statement. As far as Teutonic thrash metal goes, they have every right to be called the “Daddies” and on this HRH stage they show, with consummate ease, how three guys can top a bill in every sense of the phrase, despite being up against some of the best competition there is. ‘In Retribution’, ‘Sodomy and Lust’, ‘Outbreak of Evil’ pours into our ears, shaking us to the core. The pack horse drumming of Makka Freiwald shoulders the weight of the product. So strong is his contribution he could probably fill in for Atlas himself should the mythical Greek fancy a couple of weeks off in the summer.  Vocalist Tom Angelripper announces ‘Sacred Warpath’ as a “classic”. It would be interesting to find out which numbers in this comprehensive history of Sodom he doesn’t consider a classic. because most of us watching couldn’t spot ‘em for love nor money. Bernd Kost, the archetypal German metal guitarist drops not a single note as he skulks around the stage, infecting everyone with his own enthusiasm. This guy clearly loves his job and we all love the job he does.  A great cover of Motörhead’s ‘Iron Fist’ thrills the room and a nineteen song onslaught is brought to a triumphant end with ‘Bombenhagel’. Not so much ruthless German efficiency but more a tale of realising what works and sticking to it. Yes, Sodom gives meaning to the saying “build it and they will come”. Incredible. 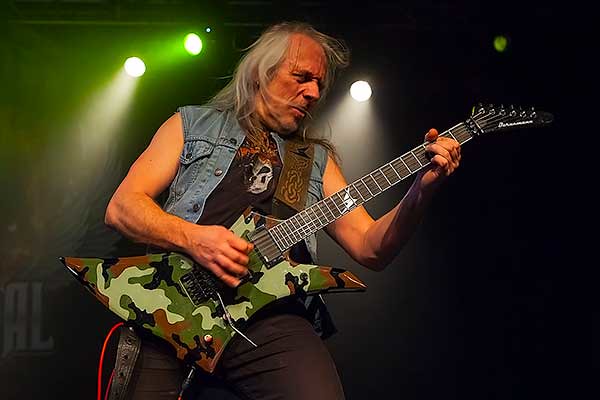 HRH festivals are bountiful affairs so it stands to reason that there’s a plethora of bands on two other stages across the whole weekend.  Saturday sees the solid steel RSJ play and absolute blinder to a packed out Acadmey 2 as vocalist Dan Cook showing that whatever band he’s with, you WILL get involved. Whilst Def Con One put us on a war footing with an audio assault on our senses and Feed the Rhino continued that theme by putting our hearing on the endangered list with the “charging bull” set that they deliver (no rhinos were harmed in the making of this gig). Over on the ‘Best of Brum’ Academy 3 stage Burden of the Noose continue an impressive six months or so winning more new friends over with this showing and Balls Deep prove they have the power to penetrate even further than their name suggests. On Sunday we are treated to the uber impressive skill set of Fury, whose technical brilliance and pristine performance can only lead us to the conclusion that this band is headed way past infinity and beyond. Hectate Enthroned come down from the mountains of North Wales (well, Wrexham anyway) and ply us with some fine symphonic black metal.  Earlier in the third arena Goth metal exponents Hanging Doll have a real “Beauty and the Beast” thing going on, not just visually but aurally as well. Gethica put on a show of gut wrenching clout and it’s easy to see why they have such a firm following across the midlands and the Heretic Order bring the curtain down on a stage that allows us all to see that the future of metal is safe and well in its spiritual heartland.

So the first HRH Metal comes to a close. Two days of frighteningly good entertainment and another example of how well HRH have come to understand just what the people want, instead of giving them what is thought to be good for them. It’s sure to happen again and if you were ever in two minds as to whether it’s worth attending or not – there’s three or four thousand people that will scream in your ear “DAMN STRAIGHT IT IS!” See you next year then.