With the recent release of their live album ‘Carpe Noctum’ Californian metal legends Armored Saint are in the UK on a short run of shows, tonight being their first ever gig in Birmingham.

Armored Saint have always been a highly regarded live act since their inception in 1982, but until now I’ve never had a chance to see them. My original plan was to cover their Hammerfest show, but while circumstances find me in a far more intimate setting, the excitement is no less palpable than it would have been in North Wales. Pre-gig I speak to fans from Sheffield, Cardiff and London who have made the trek to the third room at Birmingham’s O2 Institute, and it’s clear they would be willing to see this much revered musical colossus where and whenever possible.

Opening with the title track to their 2015 album ‘Win Hands Down’ followed by that of their debut 1984 album ‘March of the Saint’ – John Bush stands out centre stage in his flamboyant bright red shirt, belting out his distinctive, unwavering vocal. Thirty-five years into his career, the guy remains on fire, and for anybody aware of the back-story – you do have to wonder “what if” he had accepted that offer to front a certain other Californian band back in the early eighties?

What if’s and history aside, the initial salvo continues with ‘Long Before I Die’ and ‘An Exercise in Debauchery’ as Jeff Duncan and Phil Sandoval turn over riff after riff and dual harmonies with a mastery of moody exuberance. Flanked by the two guitar wizards, bassist Joey Vera joins Bush up front, one moment looking in self-contained ecstasy, the next learing and smiling at those gathered in the front rows.

John Bush confirms his own surprise that Armored Saint have never performed in Birmingham until tonight, and he tells the crowd how excited the band are to be playing in a city where many of their musical heroes hail from. “We’re going to take you on a journey, with an epic, grandiose song” he informs us, as a fitting introduction to the eight minuter ‘In an Instant’ about the Boston Marathon bombing. “Are you with me out there Birmingham?” he enquires. The response to which is a defining “YEAH!”

It’s a flawless show in terms of know-how and intricacy with superb sound quality from a band who are considered by many as one of the most criminally underrated metal acts of the 80’s. To date Armored Saint just keep on keeping on in their traditional fist-pumping, horn-raising style, which in truth does feel like you are bearing witness to a small venue gig by a much bigger venue band.

Hammering out tracks from a catalogue which includes ‘Chemical Euphoria’, ‘Stricken by Fate, ‘Mess’, ‘Aftermath’ and ‘Left Hook From Right Field’, a relatively small Birmingham audience is treated to a world class, arena worthy performance. Gonzo Sandoval delivers a short but impressive drum solo while John Bush is at complete ease with his audience, engaged in a repartee to celebrate his baldness.

Climbing the PA to sit above us all for ‘Reign of Fire’, Bush descends and makes it clear the band won’t be leaving the stage for an encore. “We’re not going back, there’s nothing there .. not even towels!” he says. The band then take it up one final notch and intoxicate a room full of old school aficionados with the minor MTV hit ‘Can U Deliver’ before rounding them up into ‘Mad House’.

Armored Saint might be one of a long line of bands still at it for over three decades, but they continue to fire on all cylinders. While John Bush proves his name needs to be in any discussion regarding the best of all active vocalists, all five masters of metal ooze panache and vintage power. It was a pleasure to see them and to hear their musical maelstrom. May the march of the saint continue. 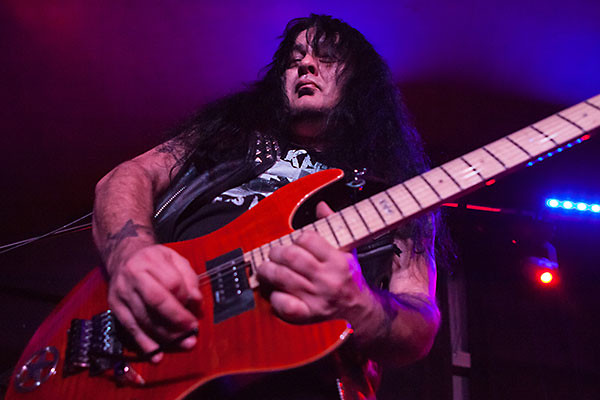