To go and watch a group of loud, bare-chested, tattooed Scottish fellas doing their thing, is probably not the most attractive suggestion. But when referring to Biffy Clyro, it’s a completely different proposition.

Out to promote their sixth studio album ‘Opposites’, Biffy have been keeping fans waiting for a UK tour, with tonight’s packed out LG Arena crowd buzzing to prove the point. In front of a plain white curtain, to the haunting keyboard intro of ‘Different People’, steps up vocalist and guitarist Simon Neil. He belts out the opening lines to the first track from the latest album, before the curtain falls away to reveal his band mates and an impressive stage-set.

Inspired by the album artwork, the backdrop and centrepiece is a huge tree, with a spinal column trunk and ribcage of branches. Steps run up the centre, allowing Neil to occasionally survey the arena from on high, whilst giant screens bombard us with a mix of visuals and live footage.

A majority of new tunes are accompanied with the standard crowd pleasers from their six album catalogue. ‘Sounds Like Balloons’, ‘Black Chandelier’, ‘Justboy’, ‘Living Is a Problem Because Everything Dies’, ‘Bubbles’ and ‘Biblical’ all feature in the first half of a mammoth 26 song set.

Joining Simon Neil are ginger twins James and Ben Johnston, on bass and drums respectively. The Kilmarnock trio have taken the old fashioned route to stardom, through sheer hard work, and tonight eighteen years of graft is evident in their performance alone. Between songs, from start to finish, comes the crowd chant “Mon the Biff”, to which Neil professes “we’ve been waiting for this night for a long-time, and you’ve made us feel right at home.”

The second half brings ‘There’s No Such Thing as a Jaggy Snake’, ‘The Thaw’, ‘Who’s Got A Match’, ‘Picture a Knife Fight’ and two superb solo spots from Neil, with acoustic renditions of ‘God & Satan’ and ‘Machines’. It’s a crystal clear sound throughout. The lighting and visual show is stunning, with the boys from Ayrshire well and truly on top of their game. Completing the main-set with a stomping version of ‘The Captain’.

‘Skylight’, ‘Stingin’ Belle’ and the epic ‘Mountains’ make-up the encore, before Biffy are gone and several thousand Brummy fans are left to hum their songs into the night. This is only the second date of the tour, so maybe that explains why it feels as if something is being held in reserve. With a further nine dates to follow and confirmed for this summer’s Reading and Leeds festivals, Biffy will be delivering equally storming, if not better shows. 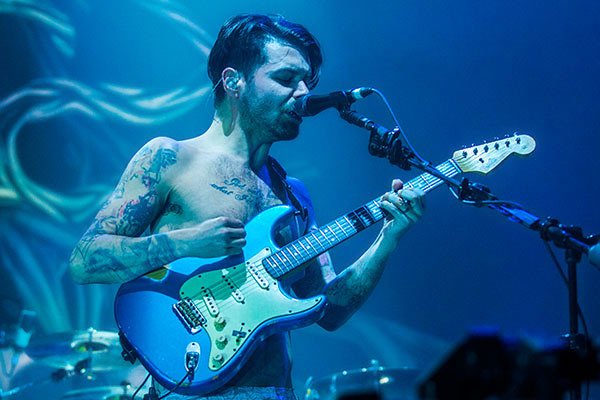