After the Gothenburg leg-break, the cancelled Wembley shows and following Royal Blood and Iggy Pop, the Foo Fighters eventually get to step out in the UK in front of 65,000 delirious fans at Milton Keynes Bowl.

Of course, to “step out” is not exactly what leading Foo Dave Grohl is able to do just yet. Three months on since his nasty fracture, the curtain drops to reveal him sat in his self-designed, illuminated, guitar neck adorned throne. It’s a thing of beauty, as is Dave, leg in a cast, rockin’ out to openers ‘Everlong’ and ‘Monkey Wrench’.

Grohl doesn’t remain centre-stage all night, oh no, his throne is motored up the central runway and out into the audience on several occasions. It’s a sight to behold, a visual spectacle which fits well with the greatest hits setlist any fan could wish for, starting with ‘Learn To Fly’, ‘Something From Nothing’ and ‘The Pretender’.

After the initial statement of: “We’ve got too many songs. We’ve got to keep it going!” Dave does of course settle down to short periods of chat in-between tracks. Prior to a slow version of ‘Big Me’ he gives credit to the Foos longstanding road crew and “lighting guy Dan” for the production of his throne, encouraging the MK bowl to light-up with phones in his honour – once again leaving the crowd visually awestruck.

Foo Fighters are not just about Dave Grohl, and he’s sure to introduce each member with a laugh and with respect. He has guitarist Chris Shiflett give us a blast of Van Halen’s ‘Eruption’ and tells smartly dressed bassist Nate Mendel: “It almost looks like you could be in Yes!” Touring keyboardist Rami Jaffee shows off a flourish, and the ever beaming Pat Smear answers Dave’s query about his favourite song by cranking out the riff to ‘God Save the Queen’. Finally Taylor Hawkins steps out from behind his kit to ask: “Who is Milton by the way?” before taking vocal responsibility on ‘Cold Day in the Sun’.

Next up is a cover of Queen and David Bowie’s ‘Under Pressure’ with Roger Taylor from Queen and John Paul Jones from Led Zeppelin. Not just a super group line-up but a “super-duper group” as Dave describes it. “The Foo Fighters are living out our rock n roll fantasy with you tonight!” he says, and from where I am – it pretty much makes for the highlight of the night.

The Foo’s just keep on giving, with the light and shade of ‘All My Life’, ‘Times Like These’ and ‘These Days’. There’s sizzling versions of ‘White Limo’ and ‘Breakout’ and a nod back to the early days with ‘This Is A Call’. Crowd request ‘DOA’ and ‘For All the Cows’ then guide us towards the inevitability of the end.

“If I look out and see Rose on the barrier, I know everything’s going to be alright” says Dave dedicating ‘Aurora’ to the superfan who is shown on the big screens with a beaming smile on her face. And then before we know it we’re 22 or so songs from the start, and being left with ‘Best of You’ completing an awesome show.

Nearly three hours ago Dave did say it was going to be “a long fucking night” and within that time there’s no doubt that we have seen the very best of the Foo Fighters. But to be honest, given the opportunity, I reckon the majority of the 65,000 in the bowl tonight would easily go for another three. 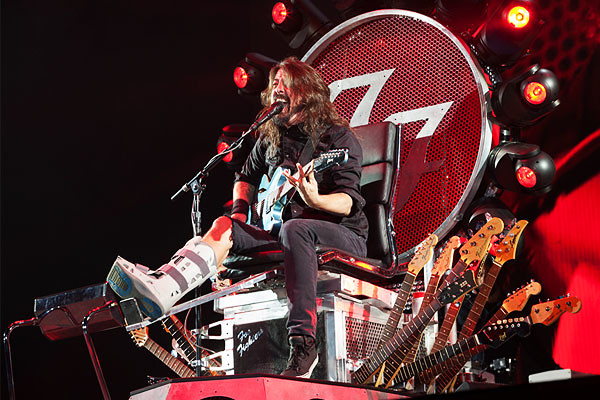