Rock legends and worldwide brand Iron Maiden are considered the most successful heavy metal band in history, having sold over 100 million records worldwide with little radio or television support.

Currently back in the UK for the final run of dates on their Final Frontier World Tour 2010/11, the tour is in conjunction with the band’s 15th studio album released in August 2010. ‘The Final Frontier’ is their most successful chart album to date, registering #1 in at least 30 countries around the world.

Tonight sees Iron Maiden play their first ever show at Birmingham’s NIA, and with it comes a five minute warning to the whole indomitable experience. UFO’s ‘Doctor Doctor’ is blasted through the PA for the first mass sing-along of the evening, before the intro ‘Satellite 15.. The Final Frontier’ reverberates about the arena, during which the screens show a striking sci-fi themed short.

As vocalist Bruce Dickinson and crew finally land on stage, the NIA’s roof is raised, with a brutal opening salvo of ‘The Final Frontier’ and ‘El Dorado’. Dickinson’s air raid vocals soar through the mix, with the mandatory order of “Scream for me Birmingham!” Everybody in the place, young and not-so young, respond accordingly.

After only two songs it felt like we were running at full pelt, but then came a whole new gear with the stalwart ‘2 Minutes To Midnight’ from the 1984 album ‘Powerslave’. The triple guitar assault of Dave Murray, Adrian Smith and Janick Gers transport me back to the age of 15, when Maiden were my musical everything. As I stand photographing my childhood heroes, with a sold-out arena crowd going berserk behind me – I do believe I experience a highlight moment of my lifetime.

Continuing with latest album material is ‘The Talisman’ and ‘Coming Home’, which is prefaced with a chat from Dickinson about the bands world travels. He is keen to reassure fans that recent rumours of the bands retirement are completely untrue. Whilst many had chosen to ignore such suggestion, there was tangible relief to hear it from the man himself.

There is an impressive light show and between songs an ever changing Eddie backdrop morphs from one artwork into another. ‘Dance of Death’ precedes the classic 1983 single ‘The Trooper’, with Dickinson dressed in a light brigade jacket, brandishing a union jack and sprinting up and around the stage and scenery. Belting out the songs’ demanding vocal with precision and power, he has the entire crowd in the palm of his hand, conducting as he goes.

The shadow of ‘The Wicker Man’ rises up for the track of the same name and onstage walks Eddie with his own guitar, duelling with Gers. This is followed by ‘Blood Brothers’, giving us two tracks from the ‘Brave New World’ album.

Drummer Nicko McBrain is as powerful and flawless as ever. Steve Harris, with galloping fingers and trademark machine-gunner posturing, remains one of the best and most influential bass players of all time. Along with the precision and fluidity of Murray, Smith and Gers – Iron Maiden are still the musical powerhouse they have always been.

One more new track ‘When the Wild Wind Blows’ paves the way for crowd favourites: ‘The Evil That Men Do’ and ‘Fear Of The Dark’ before ‘Iron Maiden’ completes the main set with a visually stunning, giant animatronic Eddie, head shoulders and arms rising from behind the drum-kit.

Finally, an encore unrivalled within the metal world: ‘The Number of the Beast’, ‘Hallowed Be Thy Name’ and ‘Running Free’ bring to a close what has been a hugely entertaining evening.

A little older than most extensive touring bands – Iron Maiden are coming to the end of another mammoth tour which has seen them perform to hundreds of thousands of fans across the globe. Yet they arrived in Birmingham tonight with undiminished energy and enthusiasm, performing a show that was slick, and which mixed up new material with old to great effect. From what I see – there is nothing jaded about Iron Maiden .. and long may they reign. 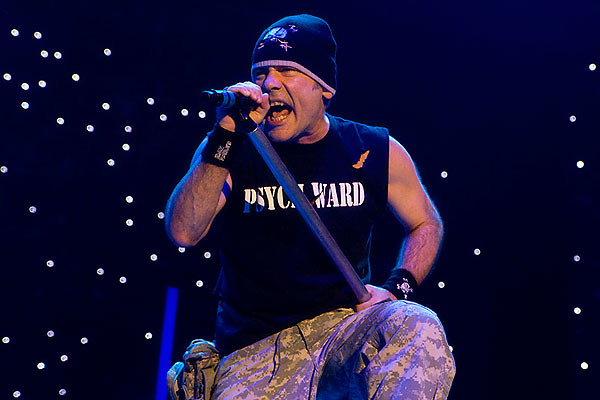