It comes as no surprise to find the O2 Academy rammed to the rafters tonight as skate punk legends The Offspring hit Birmingham with the first of three UK dates on their ‘Summer Nationals’ Tour along with Bad Religion.

Thanks to motorway hell I arrive late and miss out on Bad Religion, but it’s obvious the L.A. legends played a blinder, leaving the place pumped up and sweltering hot. Come 9.30 young kids and old kids alike are ready for more, this time from the boys from Huntington Beach, California.

With huge commercial success The Offspring have undeniably been influential in propelling punk into the mainstream. Their magnum opus ‘Smash’ was released 22 years ago and is regarded by many critics as one of the most influential punk rock albums of all time. I remain a big fan of that particular album and caught the band live for the first time back in 1997. Now, after several recorded permutations since their heyday and having recently sold their entire catalog for an estimated $35 million, I’m wondering how the live performance has faired in the last two decades.

Opening with ‘You’re Gonna Go Far, Kid’ it’s clear that both frontman Dexter Holland and guitarist Noodles haven’t lost their buoyancy and delivery. That said, some lyrical content at the foot of Dexter’s mic stand might suggest his memory is waning. However, next up is ‘The Noose’, an awesome track from ‘The Splinter’ album, with tonight being its first live outing since 2004. This is where Dexter refers to those floor-taped lyrics, so I think he can be forgiven for their use.

“How you doing?” asks Dexter before Noodles relays to us how he’s been watching Peaky Blinders on the tour bus in preparation for “BirmingHAM!” Then comes the unmistakable drum-tap intro and opening line: “You gotta keep ’em separated” which sends the place into a Tigger bouncing frenzy for ‘Come Out and Play’. Not only does the majority of the audience sing every word, they even vocally mimic the Arabian guitar phrasing.

The set throws out tracks from across the discography, with the likes of ‘Million Miles Away’, ‘Have You Ever’, ‘Staring at the Sun’, ‘Mota’ and last years digital release ‘Coming for You’. It might be hotter than the sun inside the Academy tonight, but nobody cares as they pogo along to every track and “whoah-oh” at every given opportunity. The glorious ‘Bad Habit’ sees Dexter up on his riser: “You guys are crazy!” he proclaims, telling the heaving mass he wants them to sing, like they need to be told. He keeps them sweating, just for a mo, before the build into that immortal line, when around 3,000 sets of lungs give it: “You stupid dumb shit goddamn motherfucker!” It’s a beautiful moment, a highlight no doubt.

While Dexter and Noodles seem to be the primary focus of The Offspring live show, the bass lines of founding member Greg K will always kick an audience into shape. Along with drummer Pete Parada the rhythmic groove of ‘Gotta Get Away’ reignites any spent wildfires, before the synth riffed ‘Hit That’ and steel-drum accompanied ‘Why Don’t You Get a Job?’ have those Brummie feet dancing, before we’re at full throttle again with ‘All I Want’ and ‘Want You Bad’.

Noodles flicks picks into the crowd causing scuffles amongst those desperate enough to lay their hands on one. Paying homage to Birmingham “the birthplace of heavy metal” with Judas Priest and Zeppelin riffs, the band join him for a blast of Sabbath’s ‘Iron Man’. “Black Sabbath, the best band of all time!” he says. He salutes us with “It’s a pleasure to be here!” before dedicating ‘Pretty Fly (For a White Guy)’ to Duran Duran.

‘The Kids Aren’t Alright’ finishes the show before an encore of ‘Americana’ and a massive version of ‘Self Esteem’ sends the sweat-drenched, bubblegum punk loving crowd home with a smile. I for one would say The Offspring smashed it tonight. Sure, like any other outfit of their time they might be getting on a little, but the energy is still 100% there. A 19 track set, done and dusted inside 70 minutes, making an aging rocker feel 20 years younger – I think the maths speaks for itself! 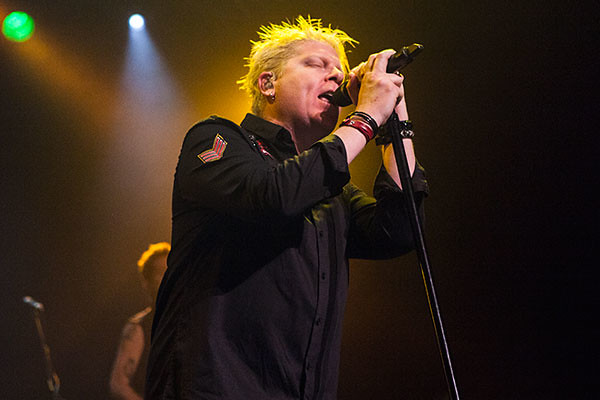