Whilst there are many bands that can fill an arena, there are few who can combine wacky humour with seriously stunning musicianship to culminate in an epic performance. But Canadian progressive rock monsters Rush make it look so natural.

During a three hour show, celebrating the 30th anniversary of their biggest selling album ‘Moving Pictures’ the Time Machine Tour is a humorous and meaningful celebration of all things Rush.

The show starts with ‘Rash: The True Story of Rush’, a short and funny film featuring the band – Geddy Lee (bass, keyboards and lead vocals), Alex Lifeson (guitar) and Neil Peart (drums) in acting roles. The power trio then emerge to ‘The Spirit of Radio’, the first song of the 80s – being the first track on the album ‘Permanent Waves’ released on January 1st, 1980.

During the first set of the evening a thoroughly delighted LG Arena crowd are treated to the likes of ‘Time Stand Still’, ‘Presto’, ‘Leave That Thing Alone’, ‘Freewill’, ‘Subdivisions’ and ‘BU2B’ a brand new song from their still incomplete forthcoming album ‘Clockwork Angels’.

The time machine concept is fully embraced with an elaborate, Jules Verne-esque stage-set, with amplifier cabinets that look like huge old radios with pipes and valves that blow steam. There are flames, fireworks, a portal on the drum riser opening to display a peering eyeball, and an impressive spider-like lighting rig with a life of its own. This is a truly visual feast which complements the superb sound and is completed by a massive HD screen at the back of the stage displaying live edits, time machine graphics and lots of historic clips.

The pace of the show is pretty much full on, but the second half is even better than the first, with ‘Moving Pictures’ performed in its entirety. Fan favourites ‘Tom Sawyer’, ‘Red Barchetta’ and the awesome instrumental ‘YYZ’ are followed by the rest of the album, including the rarely if ever played ‘The Camera Eye’.

Of course, the past is given plenty of homage, but current works are far from left out. In addition to three tunes from 2007’s ‘Snakes & Arrows’, a second new tune ‘Caravan’ explodes into a tough, feisty driven number. Alex Lifeson’s gritty guitar riff and blazing trills, Geddy Lee’s captivating vocals and fleet-fingered bass lines, and Neil Peart letting loose – as only he can – clearly prove that Rush are more than capable of progressing into their fifth decade.

Neil Peart is one of the most universally respected rock drummers, known for his near superhuman playing ability and endurance, as well as providing the band with their intellectual lyrics. Tonight he plays an obligatory, jaw dropping solo, that simply confirms what we already know – that he is technically one of the greatest drummers of all time.

‘Closer to the Heart’ is played with Lifeson transforming the intro on a 12-string acoustic guitar, followed by ‘2112 Overture / The Temples of Syrinx’ and ‘Far Cry’ bringing to a close the second set.

Encoring with the sublime instrumental ‘La Villa Strangiato’ followed by a funked up version of ‘Working Man’ from their self-titled 1974 debut album, this completes a catalogue of music which spans more than 35 years.

Rush will never be “fashionable”. But after three hours of stunningly performed, non-stop musical magnificence, and an arena production of awe-inspiring magnitude, I couldn’t think of one band that has provided me with a better evening’s entertainment. 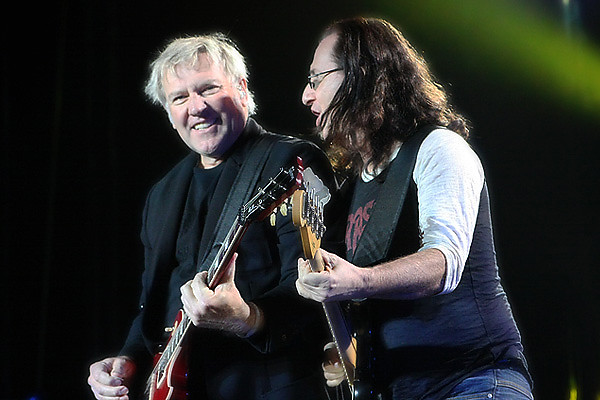