After an opening set from Orange County rockers Buckcherry, Bowling For Soup appear at Birmingham’s Barclaycard Arena tonight as main support to Steel Panther and the “heaviest” of all three bands.

Further to a UK farewell tour in 2013, there really was never any intention to split up, and with ‘Drunk Dynasty’ – their first album in three years – released less than a week ago, “BFS” are likely to be around for a while yet. The “Bowling For Soup” intro song signals their arrival and it has a good majority of the crowd bouncing along in anticipation for the Texan quartet.

Up and away with ‘The Bitch Song’ and ‘High School Never Ends’, the lively, fun, genius of Bowling For Soup is pretty inescapable. In addition, there’s no escaping the fact that main man Jaret Reddick has piled on some pounds in the last few years, and could be challenging guitarist Chris Burney for his man mountain crown. He jokes that we may have thought he had eaten himself and that the band are the “heaviest” on the bill.

As co-writers and singers of the theme song for Disney’s Phineas and Ferb, there is of course and outing of fan favourite ‘Today Is Gonna Be A Great Day’. Then comes the new single ‘Hey Diane’ which is well received – those Soupers present tonight obviously having done their homework. There’s plenty of banter onstage before Reddick asks the crowd: “Who’s excited about our song Stacy’s Mom?” to explain to anybody not already in the know that ‘Stacy’s Mom’ is actually a cover of the Fountains of Wayne song. No matter, it goes down a storm anyway.

Bowling For Soup provide an amusing show, not to mention a host of great pop-punk tunes, like ‘Punk Rock 101’ and ‘1985’ (a SR-71 cover for those not up on these things). The fun factor of these guys marries up perfectly with the headliners, and it is all genuinely funny stuff in-between songs. Towards the end they provide the audience with a “Bowling For Soup photo opportunity”, running to each end of the stage and posing for pics to the sound of David Lee Roth’s ‘Yankee Rose’.

A lovely touch is the dedication to two long-time crew members who part company with the BFS “family” after tonight’s show – quite possibly a genuine choker for Reddick, but he pulls it off with real sincerity. Finishing with what he introduces as “the best song ever” is the classic ‘Girl All the Bad Guys Want’.

Bowling For Soup came to do a warm-up job for Steel Panther tonight, and while putting on a great support show in an arena setting has no guarantees, they conquered the task with remarkable, entertaining ease. 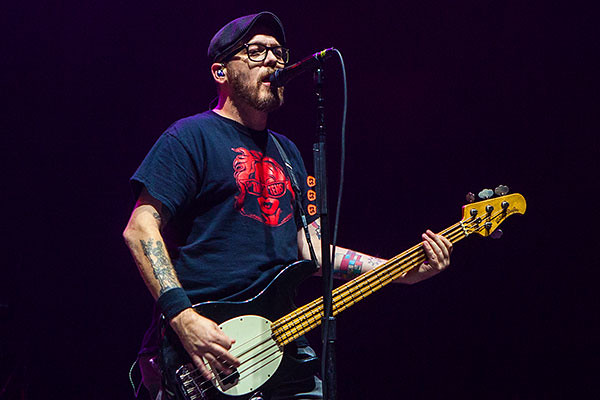