I’m not keen on that phrase, but Sum 41 do epitomise the “pop-punk” aesthetic and to be honest I’ve always been a fan of their particular blend and the work of main songwriter Deryck Whibley. Five years since hospitalisation, a collapsed liver and kidneys, not to mention being told one more drink could be his last, it’s fantastic to see the guy bound on stage at the De Montfort Hall looking healthier than ever. As the crowd erupt and the band take their places, you just know this is going to be a show to slap you in the kisser.

What better motivation for an audience to get stuck into a show than .. well, ‘Motivation’, the perfect high-energy, three-minute brash attack from the classic ‘All Killer No Filler’ album. While a good percentage of tonight’s crowd wouldn’t have started school when the 2001 debut was released, I’d say there’s a few here who weren’t even born. But nobody cares about that, and during ‘Hell Song’, ‘We’re All To Blame’, along with the CO2 and confetti cannons – there’s a sea of kids, parents and grand-parents (probably), just being a bunch of “Skumfuks” – having a ball.

Early on Whibley selects two ecstatic fans from the front rows to view the show from side-of-stage. No doubt the privilege will remain with them, but after a while I wonder if they might prefer to be back down the front with their mates. Against the new album cover-art backdrop – the band rip through ‘Goddamn I’m Dead Again’, ‘Walking Disaster’ and ‘Underclass Hero’. With huge balloons launched into the human cyclone of a circle pit, the fun-filled, angst ridden set rages on.

‘Order In Decline’ has been described as Sum 41’s “heaviest and most aggressive album to date”, with two tasters served up tonight going a long way to punctuate that statement. The lead single ‘Out For Blood’ is a hard hitter, with anthemic vocals and an insane guitar solo from Dave “Brownsound” Baksh who stands tall on his riser. “Holy shit!” exclaims Whibley at the prospect of the release date being less than four weeks away, before ‘A Death In The Family’, itself a raucous and heavy affair.

The back catalogue includes the emotionally charged ‘Pieces’ and ‘Some Say’; both from the third studio album ‘Chuck’, currently celebrating its fifteen year anniversary. In addition comes the career spanning ‘Fake My Own Death’, ‘Over My Head (Better Off Dead)’, ‘No Reason’ and ‘With Me’ – all enthusing the Leicester crowd to lose it, especially when the backdrop makes way for a giant inflatable, demonic red eyed skeleton.

The diminutive figure of guitarist Tom Thacker occasionally makes his way forward from Frank Zummo’s drum riser to join Baksh and fiery bassist Jason McCaslin. Whibley highlights his presence before a punked up rendition of Queen’s ‘We Will Rock You’, and four from home comes the seminal  ‘In Too Deep’, which 18 years after its original release has recently been certified Platinum in the UK.

The final curtain number is of course ‘Fat Lip’, one of the many classics which doesn’t feel old at all, yet reminds us that Sum 41 have now been active for 23 years. Amazing as that is, with a turnover of songs mixing catchy tunes and heavy duty guitar, and continuing to perform such hugely energetic live shows, I suspect they are going to be around for a long time to come. 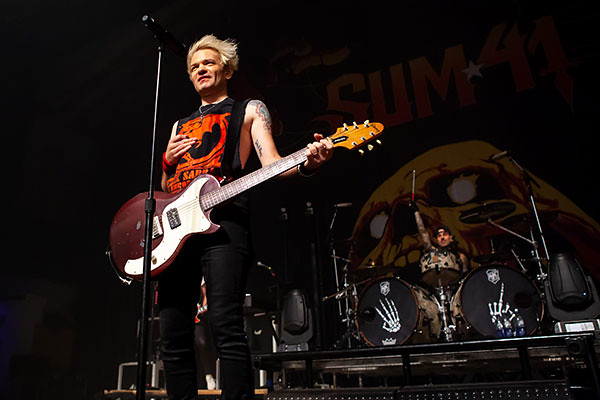