The festive season means many things to many different people. Love it or hate it, it’s there to be dealt with. Crap TV, tolerating crap relatives, “try anything” hangover cures and rampant consumerism are the main focus for most, but for almost all of us – nostalgia is never far from our Yuletide thoughts.

Tonight’s show in the nations’ second city is a Beltane belter, a formidable double-barrelled Goth gun of a line up. The Black and purple is out in force as The Mission and Fields of the Nephilim conspire to take us back through the past, darkly.

Pre-Christmas tours are always up against it as finances are channelled into the high street gift machine, but the Goth genre has a fiercely loyal fan base, and though by no means full – the venue is throbbing with a healthy sized and highly expectant gathering. Which is justified, as many have waited two decades or so for Carl McCoy to lead his long riders out of the capital and back into the provinces. There is more of a gasp than a cheer as Fields of the Nephilim’s ‘Dead But Dreaming’ intro cascades over the watchers heads, the ceremony is about to begin.

The band stroll on to the stage to take their places and then from behind the dry ice curtain McCoy, the preacher man himself, saunters on. The cry and the hands of the Neph-heads shoot skywards, all present are surveyed intently by their returning hero, just for a second before ‘Chord of Souls’ pierces the momentary trance and brings everyone back into the realm of the present.

McCoy has lost none of his detached menace stage persona, wielding his mic stand like an ancient sword as he growls his way through ‘For Her Light’ and on into ‘Love Under Will’ where upon the first human pyramid (a Goth gig tradition) is built.

OK this isn’t THE classic Nephilim line up but the return of original bassist Tony Pettit is a Christmas gift that adds extra impetus to the occasion and the new cohorts all play their part. The Baron’s sharp guitar work, Gav King, looking like a true Cursed Earth outlaw and the six-shooter drumming of Lee Newell are the perfect backdrop to McCoy’s enthralling lead. There is old time magik at work here for sure as Nephilim classics ‘The Watchman’, ‘Psychonaut’ and ‘Moonchild’ are greeted with wails of delight from the gathered.

Eventually the ritual is brought to a close by the Nephilim anthem ‘Last Exit For The Lost’ and as McCoy releases the crowd, breathless, from his spell, the only complaint could be that we don’t get to see the classic headline show that is to be served up at the subsequent London gig. Still, it’s agreed, this had been worth the long, long wait and the rapture that greeted the return of these western heroes will surely entice McCoy to lead them down these travelled roads more often. We live in hope. Blessed be my friends, blessed be. 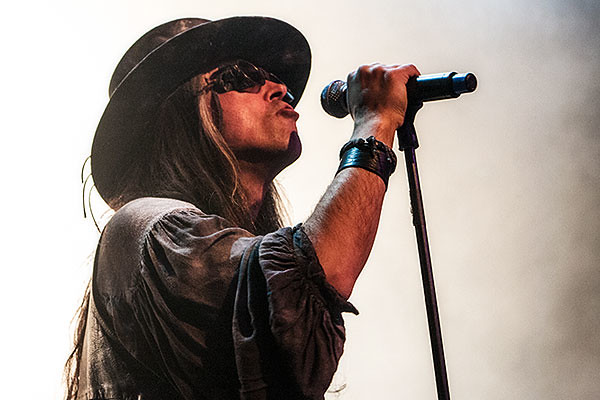 Tags from the story
Fields of the Nephilim, Live Review, O2 Academy Birmingham