The Chili’s were formed in Los Angeles in 1983, with a musical style developing into their own funk and rap-nuanced version of rock, committed to mass stadium audiences for the majority of a near-30-year career.

Consisting of founding members Anthony Kiedis (vocals) and Michael “Flea” Balzary (bass), alongside long time drummer Chad Smith, The Red Hot Chili Peppers arrive in Birmingham on the last stop of their UK tour, to promote the release of their tenth studio album ‘I’m With You’.

Tonight is the second of two sold out shows at the LG Arena, on the band’s first full UK and Ireland run since 2006, and their debut trek on these shores with new guitarist Josh Klinghoffer, who replaced long time player John Frusciante in 2009. Opening with ‘Monarchy of Roses’, ‘Dani California’, ‘Charlie’ and ‘Can’t Stop’ – this is a show blazing with colour and dynamism. A state-of-the-art light show is coupled with Kiedis and Flea giving many of today’s young pretenders a run for their money in the energy stakes.

The recent single ‘The Adventures of Rain Dance Maggie’ is the only new track to make much impact tonight. The latest album’s most generous reviews have been forced to call it “solid” and “business as usual”, so I guess it is with relief for many that only four newbies are played during the two hour show.

We are treated to ‘Throw Away Your Television’ and ‘Otherside’ amongst a set that mixes rock, punk, psychedelia and funk with a dizzy self-confidence. Front man Anthony Kiedis prowls like a demented cat, Flea is hugely entertaining – being the focal point of the band, with plenty of interaction with the crowd, while drummer Chad Smith and Josh Klinghoffer are sensational showmen.

All the tunes you want to hear are jammed out, without any need or care for high-end album production. That is not to say the sound is bad – far from it, but it is so cool to hear the likes of ‘If You Have To Ask’, ‘Me & My Friends’, ‘Higher Ground’ and particularly ‘Californication’ delivered in the raw. I’m certainly not what you would call an ardent RHCP fan, but I can’t deny this is a fantastic live performance from start to finish.

An inevitable highlight is ‘Under the Bridge’, with around 12,000 people singing along to Kiedis’s wonderful song of drug-haunted LA loneliness. ‘By the Way’ completes the first set, before the band return to stage for ‘Sir Psycho Sexy’, ‘They’re Red Hot’ and ‘Soul To Squeeze’.

Finally there is one last return to the classic 1991 album ‘Blood Sugar Sex Magik’, ending with the massive ‘Give It Away’. Kiedis says his goodbyes and departs from the stage a good five minutes before the rest of the band, who continue to jam.

The Red Hot Chili Peppers return to the UK in June next year for a couple of huge outdoor shows, appearing at Knebworth Park and Sunderland’s Stadium Of Light. Based on tonight’s performance, I suggest these shows look like being a highlight of summer 2012. 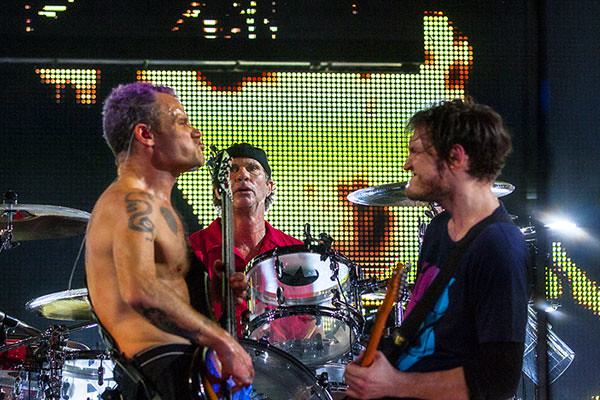