The sun is shining, the beer is flowing, as a carnival of metal nutters descend upon Catton Hall in Derbyshire .. it’s day one of Bloodstock Festival 2012.

Grand Magus
After Malefice and Freedom Call had rattled the cages of the early bird punters keen to start their metal fix, it was time for Grand Magus to take the festival from the warm up – to the tear up – in one metal leap. After more than 15 years the Magus boys know how to handle such a task without too much trouble, making a grand old entrance and a damn fine noise for a trio, opening with ‘Storm’ and ‘Kingslayer’. Further tracks such as ‘Ravens Guide Our Way’ and ‘I, The Jury’ are delivered and received well, with frontman Janne “JB” Christoffersson, doing what he can to incite the crowd. With a quality set Grand Magus leave the Ronnie James Dio stage with the festival truly up and running. Job done.

Iced Earth
Back on the Ronnie James Dio stage Iced Earth, who carry a decent away following with them, waste no time in going for the throat with their starter ‘Dystopia’. New frontman Stu Block recovers well from a comedic mic fumble to conduct the crowd through ‘Angels Holocaust’ and the cheese laden ‘Watching Over Me’. With Block willing to shoulder the burden of focus, guitarists Shaffer and Steele are left to concentrate on serving up performances of real quality, so by the time Iced Earth close with their classic eponymous number, the day for them is pretty much won.

Sepultura
Whatever form they take, when Sepultura are mentioned metal fans will prick up their ears and come running. In front of the biggest crowd of the day so far the ‘Seps’ thunder into ‘Beneath The Remain’s and instantly prove they still have enough power to compress vertebrae at 100 paces. Yes, OK, there are still the gaping holes that appeared when Sepultura converted to a one guitar band, but these are still great songs and the crowd reaction confirms that metalheads will probably always believe that. The imposing Derrick Green, a man who has faced down his critics, leads with confidence and a guest vocal appearance by Tim Owens for a mighty rendition of ‘Territory’ stirs the hearts of the crowd. The sing-a-long ‘Roots Bloody Roots’ that ends the set proves that no, this may not be the real thing, but it’s close enough.

Dio Disciples
A covers band on the main stage? No, really? But yes it’s true. OK, the stage this particular one takes bears their mentors name but Dio Disciples are just that, a covers band, plain and simple. With  Tim ‘Ripper’ Owen making a decent stab at ‘doing a Ronnie’ and Toby Jessop who fits the shoes a little more comfortably, the band turn on the Ronnie James Dio jukebox. ‘Holy Diver’, a duel of the Dio’s during a ‘Kill The King’ romp, ‘Neon Knights’, ‘Man On The Silver Mountain’, ‘Heaven & Hell’ all add up to some splendid audience pleasing fun, albeit fun that – as one punter remarked – we could have seen down the local on a Friday night.

Watain
Watain prowl out onto their impressive stage set and to the strains of dark choral music; they light their pyres and tridents. With flames reaching skyward Watain then ignite the whole festival, launching into their lupine inspired; doom soaked, heads down brand of metal. ‘Malfietor’ serves as a warning to be prepared and there is no let up.  “We’re here to bring the sun down” declares frontman Erik Danielsson and a quick look to the horizon does seem to back this wild claim up to the hilt. Either way it’s a moot point as ‘The Serpents Chalice’ proceeds to punch the ol’ fireballs lights out.  Visually exciting in their metalgore make up Watain are tight and accomplished if at times a little bit ‘by the numbers’. Nevertheless the Swedes provide the first real spectacle of the weekend and ‘The Waters of Ain’ brings a black curtain down on an impressive contribution.

Behemoth
Not wanting to be outdone by anyone Behemoth have invested in some pretty heavy duty stage decor themselves. As the stage descends into darkness the crowd chant the name, and as if summoned by the will of the masses the Polish protagonists enter, one after the other, building the pure air of menace. Nergal steps forward to survey the congregation one last time before ‘Ov Fire and the Void’ brings the meeting to order. ‘Moonspell Rights’ continues the soundtrack to Armageddon, every line is growled out as if casting a curse on all non-believers. Solid as granite rhythm guitars drive the whole thing forward and razor sharp lead riffs slash through the night air. This has become something of a ceremony. “It feels good to be alive” rasps bassist Orion and yessir it sure does. ‘Christians to the Lions’ is a celebration of Behemoth’s dark musical art. Pyros and an impressive light show are the order of the day until the self-explanatory Lucifer calls time on the whole day’s proceedings. Behemoth troop off stage knowing that theirs is the marker the rest of the weekend must rise to. 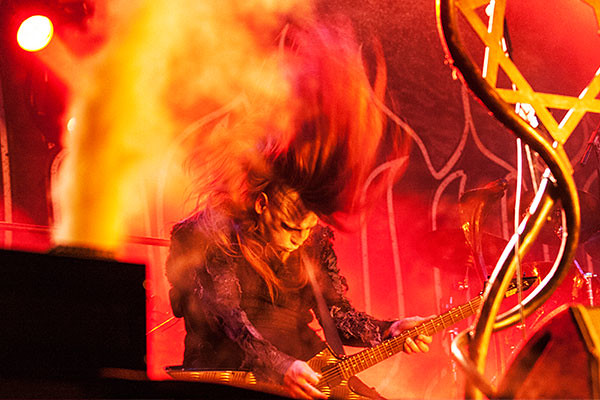