Approaching fifty years in the game and with the recent release of  their twentieth studio album ‘InFinite’, Deep Purple are on the ‘Long Goodbye Tour’. So, could this be one of their last ever UK shows?

It’s certainly an unanswered question and ongoing discussion point for fans. The age and health of the band are key factors, but further to Ian Paice’s minor stroke in June 2016, the Long Goodbye Tour announcement in December came with news that no hard, fast plans had been made. Most importantly, tonight, Deep Purple – one of the most influential pioneers of hard rock and heavy metal – are here to play, and a packed Arena crowd welcomes them with open arms.

Set opener is ‘Time for Bedlam’, the first single from the ‘InFinite’ album, starting with a spoken word introduction from Gillan, before the band join him for what is a classically sounding Purple rocker. This comes before a couple of actual classics; the first being ‘Fireball’. One of the earliest examples of speed rock which has Ian Paice proving he has stood the test of time, before a masterful rendition of  ‘Bloodsucker’ – both tracks filled with the original genetic instructions that produced the metal genre.

Early on, Gillan apologises for the seats, which has the desired effect as plenty of bods get up on their feet. He brings up the subject of the band’s uncertain future. Talking about the ‘InFinite’ album being their last, he suggests that things might now change. “We weren’t very well a couple of years ago” he says. “But we’re feeling better now, so we might carry on. We’ll see how it goes.”

So, there we have it – from the horse’s mouth, still nothing confirmed, but this may not be a final chance to see Deep Purple, and it’s news that goes down well in Birmingham. What is perhaps less popular (and I can hear the mutterings) is the exclusion of standards ‘Highway Star’, ‘Speed King’ and ‘Strange Kind of Woman’. Instead there is new material such as the bluesy, slow burner ‘The Surprising’ and ‘Birds Of Prey’ which features an outstanding, climatic Steve Morse guitar solo.

There’s no doubt that Deep Purple have always been able to play proficiently, and they still can. Both Jon Lord and Richie Blackmore replacements – Don Airey and Steve Morse deliver consummate performances, while Ian Paice and Roger Glover remain solid and dependable. A tribute is paid to the late, great Jon Lord with a passionate performance of ‘Uncommon Man’.

At seventy-two years old, Ian Gillan may not have the vocal vitality of his younger self and he may have toned down his output over the years, but boy can he still sing. From 1984 ‘Knocking at Your Back Door’ and ‘Perfect Strangers’ are set highlights, for me at least, as new tracks from around the time I first saw the band. OK, Gillan’s range isn’t what it once was and of course he’s not going to be performing ‘Child In Time’ every night, but the guy remains a unique talent, and one of the best.

In addition to a dexterous keyboard solo from Don Airey, there’s superb versions of the classics ‘Space Truckin’ and ‘Smoke on the Water’. Both from the commercially successful 1972 ‘Machine Head’ album, the latter is accompanied with screen imagery relating to the Montreux Casino fire which inspired the song, bringing the set to a close with plenty of crowd participation.

Returning for an encore which features a keyboard/guitar battle during ‘Hush’, a bass solo from Roger Glover and the hand grenade impact of ‘Black Night’ – with another blistering Steve Morse solo – the show peaks above the fantastic standard it has set throughout. “You’ve been great, superb, magnifique” says Gillan. “Take it easy. We love you.”

We will have to wait and see what the future holds for Deep Purple, but if tonight was the last chance to see them, then it was a show to be thankful for, because they certainly left here on a high. 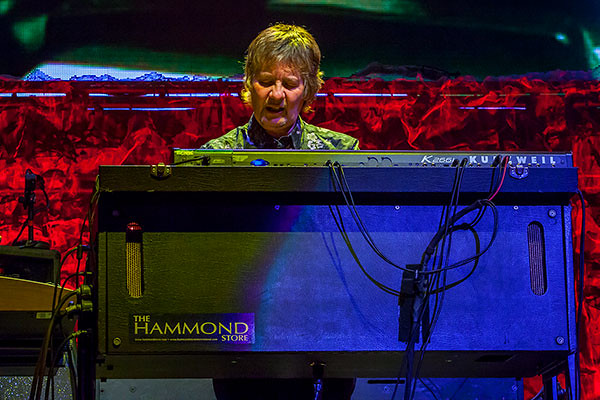