Extreme are here to take fans back in time, specifically to the definitive album of their career – ‘Pornograffitti’ – which the Boston band are performing in its entirety on this tour.

The lights go down and a cheer goes up, as the piano introduction and hand clapping leads us into the guitar riff of ‘Decadence Dance’. Up and away into Extreme’s land of funk rock – it’s a thing hard to resist, whether you were around in their hey-day or if you’ve never heard them before.

Pat Badger thunders out his bass-line intro to ‘Get The Funk Out’, a firm fan favourite, which has everybody in the mood to belt out the chorus. However, it’s guitar virtuoso Bettencourt who finishes up with a fine display of dexterity and precision, before taking a seat with an acoustic guitar and Cherone, for a rendition of ‘More Than Words’ – the inevitable song of the night which has the entire O2 Academy singing along. Love it or not, it is unashamedly emotional, and it’s pretty cool.

Everybody pulls themselves together in time for ‘Money (In God We Trust)’ and ‘It (’s a Monster)’. Cherone’s vocal is on fire and Bettencourt proves over and over again what a beast of a guitar player he is, before an impressive tinkling of the ivories for ‘When I First Kissed You’.

If any jaw hasn’t already hit the floor watching Extreme’s guitar maestro, Bettencourt steps forward for the insanely fast guitar solo that is ‘Flight of the Wounded Bumblebee’, before the band rejoin for ‘He-Man Woman Hater’.  Finishing the ‘Pornograffitti’ 1990 album set is ‘Song for Love’ and the motivational, bounce-along ‘Hole Hearted’.

The band return for an additional twenty five minutes or so. Kicking of with ‘Play with Me’ from the self-titled debut album, followed by ‘Rest in Peace’, ‘Am I Ever Gonna Change’, ‘Midnight Express’ and ‘Cupid’s Dead’, rounding off a cool compilation of 90’s album tracks.

Extreme are a tight, impressive outfit who remain full of energy and enthusiasm. Their songs and their sound can be both light and heavy, with bucket loads of groove culminating in an exhilarating live show. Still well on top of their game, with individual musical prowess and a very special talent in Nuno Bettencourt, they are a band well worth seeing if you’ve never had the pleasure. 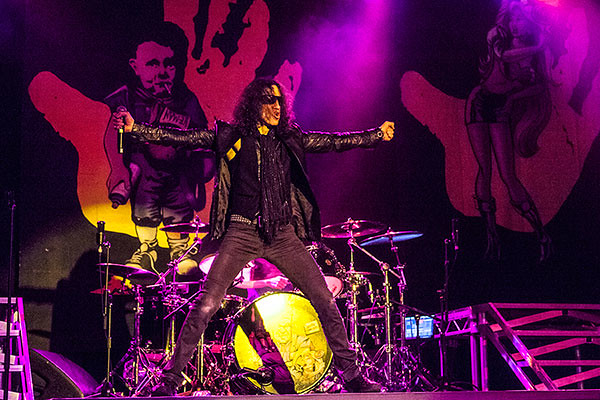