It’s not long before the slight awkwardness of Europe‘s set is forgotten and the stage is set for Foreigner – a band internationally renowned for creating some of the most iconic songs in rock music history.

At their core is founder and lead guitarist Mick Jones, the visionary maestro whose stylistic song writing continues to Foreigner’s influence. So, at the start of the show the question is – where is Mick?

‘Double Vision’ and ‘Head Games’ get us underway – both of these tracks I recognise, but neither as clearly as ‘Cold As Ice’ and ‘Waiting For A Girl Like You’. As a child of the seventies these songs are unavoidably ingrained within me, and I’m surprised they are not played later in the set for Jones to be part of. However, they do give early opportunity for charismatic frontman Kelly Hansen to prove he has the perfect voice – not to mimic Lou Gramm, but certainly to reproduce these massive hits.

I suspect Hansen is every part the vision Jones had when hearing his voice for the first time a decade ago, and a great deal more. Out into the front rows, he’s energetic and entertaining, doing his best to get the entire “intimate” Bristol audience on their feet. This is a dynamic Steven Tyler-esque performer with a nack for the patter, and he’s quite brilliant at the whole shebang.

Mick Jones eventually joins the band on-stage prior to ‘Feels Like The First Time’, his delay presumably for reasons of health rather than any conceited big entrance, or it’s possibly the time it has taken him to get into those skinny white jeans. Taking over lead guitar from Big Country founding member Bruce Watson, he joins Hansen at the helm and sails through ‘That Was Yesterday’ and ‘Dirty White Boy’ – the recent Songwriters Hall of Fame inductee showing he has lost none of his technical ability.

Born just down the road in Somerset, Jones introduces the band saying “I think this is Foreigner’s first time in Bristol. I should know – I’ve been here from the start.” He gives special thanks to Watson for helping the band out during his illness and for being taken on board as a permanent touring member.

The set continues its cavalcade of greatest hits – firstly ‘Starrider’ from the self-titled 1977 debut album with Jones on lead vocals, followed by ‘Urgent’ with the superb sax work of multi-instrumentalist Thom Gimbel. A perfectly executed but wholly unnecessary keyboard and drum solo takes up valuable set time before the entire band return for the massive and extended version of ‘Juke Box Hero’ complete with inflatable juke box.

The encore consists of ‘Long Long Way From Home’ before the classic ‘I Want To Know What Love Is’ – a tune I imagine most people of adult age are familiar with. Completing a show of memorable and iconic tunes is ‘Hot Blooded’ – a fine combination of hard rock guitar and disco groove with Kelly Hansen’s interpretation of Jones’ suggestive lyrics.

Cheesy or not, it would be hard for anybody to argue about the quality of Foreigner’s best songs. With every member of the band performing with a nod, a wink and a smile – I’m surprised to have recognised the majority of tonight’s set, but it makes me realise how prominent the material was at its peak.

As the band come together to accept audience approval, it’s Kelly Hansen who has undoubtedly captured the hearts of many long-time Foreigner fans. Whilst they might love to see Lou Gramm back in the fold, Hansen – a modern rock icon – cannot be denied a job well done. 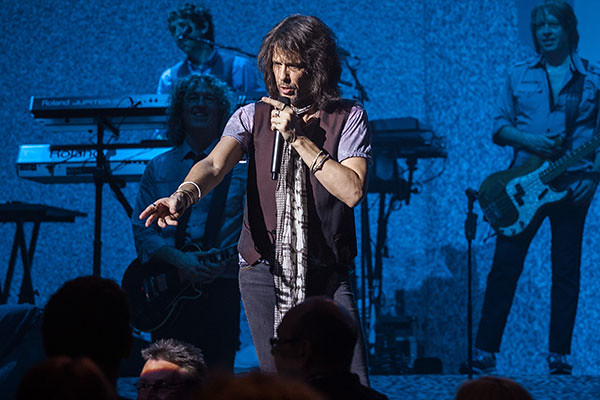