The AOR triple-header of Foreigner, Europe and FM has been billed as “the rock ‘n’ roll tour of 2014” with tonight’s sold out Colston Hall show proving it has significant appeal to the melodic rockers of Bristol and beyond.

A 70 mile journey on a Friday evening always made it unlikely that I would catch FM – so taking to the stage before 7pm, with only six songs, shattered any remote possibility there may have been. However, I’m lead to believe that in front of a sparse audience the Londoner’s did appear to have the time of their lives, playing a faultless set with nothing to fear from the bigger boys to come.

This is my fourth live encounter in as many years with the legendary, Swedish rock band Europe. With a loyal fan base and up-to-date material that might just surprise a few people, it did strike me as strange for them to be special guests to Foreigner. Not because I don’t agree with the hierarchy of it all, but more a mismatch of audience from the Scandinavian’s point of view.

The tasty, heavy riff driven ‘Riches to Rags’ followed by the hard edged ‘Firebox’ kicks off proceedings – both tracks taken from the band’s most recent album ‘Bag of Bones’ (2012). Receiving a warm, if not subdued welcome, this newer sound is an immediate tester, with plenty of tonight’s patrons probably asking themselves if this is the band they were expecting to see.

Attention does of course fall on the ever animated Joey Tempest, and as the older tunes start to come – the rest of the band fade into the background, appearing at times to just be going through the motions. This is a decent size crowd to perform in front of, but with the majority of Colston Hall remaining seated throughout the set – it just isn’t, and was never going to be a typical Europe audience.

First from the archive is ‘Superstitious’ which includes a shockingly embarrassing segment of ‘No Woman No Cry’ – but less said about that the better. The rest of the set includes the power balled ‘Carrie’, ‘Cherokee’ and ‘Rock the Night’, all of which at least have the audience engaged, if not on their feet as the gods of AOR would intend.

Tempest remains the vocally adept, mic stand twirling, consummate frontman throughout. He banters with the audience, talking about the funny things Bristolians say. “Alright me Baba! What does that mean?” receiving a polite, comedy club laugh. Along with reactions in the right places and the band playing well – for me the outstanding guitar work of John Norum, as always, being the highlight – it’s certainly not a bad show.

For the encore, a massive driving version of the superb ‘Last Look At Eden’ is clearly a shock for some, but is made up for with, yes, “that song” – ‘The Final Countdown’ – to finish. Inevitably this keeps the old school audience perfectly happy. After all, I guess it is the one song they expected and wanted to hear. 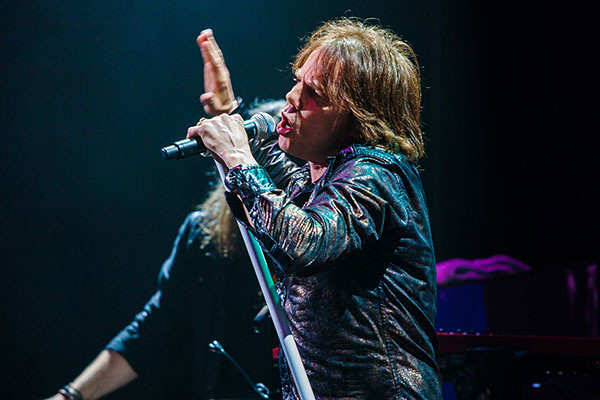