Tonight Birmingham plays host to legendary American rock icons KISS, as they call time on their career and perform the opening UK show of their ‘End of the Road World Tour’.

Close to notching up another decade since I last saw them at the LG Arena in 2010; KISS have been in the game for a total of 46 years. While “The Starchild” Paul Stanley may have lost a little of the spring in his step, there’s not a great deal of difference to report regarding the ability of the individuals, the performance of the band and the spectacle of their show. It may not be the first time KISS have bid farewell to their army of fans, but it is quite likely to be the last, and it’s no surprise they never intended to leave quietly.

Lowered to the stage amidst flames and explosions, ‘Detroit Rock City’ kicks off the hottest two hour set of rock ‘n’ roll known to man. Through the likes of ‘Shout It Out Loud’ and ‘Deuce’ Stanley along with cohorts “The Demon” Gene Simmons, “The Spaceman” Tommy Thayer, and “The Catman” Eric Singer, engage, provoke, titillate and fascinate the generations of fans packed from front to back in the heaving Arena.

A spin around the early eighties gives us ‘Heavens On Fire’ and the earth-shaking ‘War Machine’ which includes Simmons demonstrating his fire breathing skills with an array of blazing visuals. Stanley then reminds a younger proportion of the audience “some of you weren’t born in 1983” before an extended version of the tongue waggling favourite ‘Lick It Up’, segueing smoothly into The Who’s ‘Won’t Get Fooled Again’ and a dazzling blue laser display.

The show is chock-full of fire, explosions, spectacular lighting and vintage footage on the big screens with the heavy rock pantomime characters delivering a crazy, crazy night of entertainment. Of course most attention is centred on Paul Stanley and Gene Simmons, but Eric Singer and Tommy Thayer are not to be forgotten in the mix. Singer hammers out an outstanding six-minute drum-athon during ‘100,000 Years’ and the “old school” ‘Cold Gin’ showcases an exalted, rocket firing guitar solo from Thayer.

Celebrating his 70th birthday next month, Gene Simmons has no intention of growing old gracefully. With his own “axe” design bass, he is drenched in green light for a solo spot which culminates in his theatrical blood spitting ritual, before being lifted into the rafters of the Arena on a hydraulic platform for ‘God of Thunder’. Only a few years his junior and not to be outdone for WOW factor, Paul Stanley zip-wires half the length of the Arena to perform ‘Love Gun’ and ‘I Was Made for Lovin’ You’ from his own mini-stage located above the mixing desk.

The main set concludes with the 1973 classic ‘Black Diamond’ – originally sung by co-founder and original drummer Peter Criss – before Singer returns to stage on vocals and piano to front a heartfelt and climactic version of the ballad ‘Beth’. The finale of ‘Crazy Crazy Nights’ with the release of giant Kiss balloons, and ‘Rock and Roll All Nite’ sparking yet more pyro and a veritable blizzard of confetti, is the end of a show to end all shows.

Tonight, although never absolutely definitely, was probably the last opportunity for many KISS fans to see the band perform live. There’s no doubt that it did feel special to witness this final farewell to Birmingham. and for those fans I imagine it was a show that had everything they could have wished for. They wanted the best, they got the best, KISS, going out with a bang. 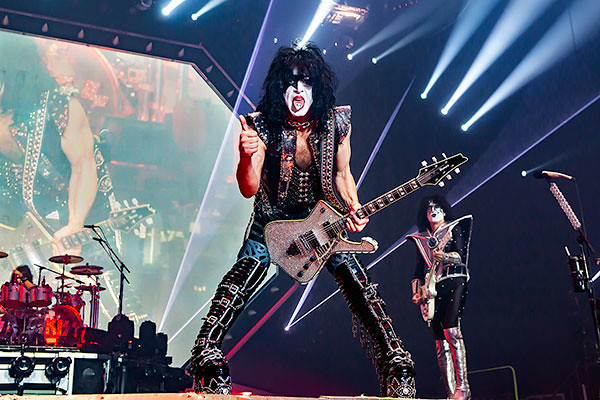