Very few of us can claim to be in at the beginning of anything, let alone a generation defining genre or sub culture. Texan pop-punks Bowling For Soup are a band that has every entitlement to the mantle of not only pioneers, but consistent pace setters in their chosen field.

However, everything that starts ends – it’s one of life’s inalienable truths, and after nigh on twenty years of bounding around the globe peddling their particular brand of teen angst inspired bop-along punk rock, Bowling For Soup have decided to call time on a noteworthy career. So, expectations are high as their faithful trek into Birmingham’s O2 Academy for tonight’s episode of this worldwide swansong.

The place is literally packed to the rafters and evidence of the band’s universal appeal is startlingly clear in the ageless audience demographic. The buzz arising is more resounding than a swarm of killer bees as Bowling For Soup’s cartoon intro track “Here Comes Bowling For Soup” fires up. The chanting and hand swaying tell you that this should be an easy task for the gang from Wichita Falls.

The band stroll out to near frenzy from the gathered Soupers. There’s a pause, everyone takes a deep breath and … it wouldn’t be fair to say that opener ‘Critically Disdained’ leaves everyone with a sense of anti-climax, but expectations are not actually met. The place was ready to explode, but in reality it doesn’t happen that way. Follow up ‘Almost’ does almost prime the detonator, but the bomb doesn’t actually go off. This uneven start sets the tone for the rest of the evening – it’s a nearly, but not quite, kind of affair.

Don’t get me wrong, Bowling For Soup will always entertain. What with bassist Erik Chandler’s new hat and spit juggling routine, the opening of an onstage bar – manned by support band, friends and family for the duration of the show (I can see that catching on across rock and roll) and the continuous puerile, toilet based, Beavis and Butthead-esque stage banter – all components that their crowd have always turned up to see. But throughout the set there are many cries of “play the f**king song” which tells you much of what you need to know here, and that is that, mentally, Bowling For Soup have never really emerged from the garage where this all began.

Luckily, the guys do have the ammo to re-ignite the gig out of the many lulls, with ‘Hooray for Beer’, ‘Emily’ and ‘High School Never Ends’ providing genuine sing-a-along high spots. Frontman Jaret Reddick is able to command the faithful to his every whim, but the lack of any kind of spontaneity from them is another glaring flaw.

Chris Burney is a huge chunk of a man that damn near fills half the stage, so his lack of movement can be excused, but overall Bowling For Soup do not invest nearly enough energy, or indeed the emotion that one would have the right to expect from a farewell performance such as this. This rubs off on the watchers, which, in turn, only serves to perpetuate the inescapable, overall “let down” feeling. A feeling that is reflected further in the tepid reaction to new songs ‘Since We Broke Up’ and ‘Envy’.

It’s left to a cover of Fountain Of Wayne’s ‘Stacy’s Mom’ and their own worldwide smash anthem ‘Girl All The Bad Guys Want’ to provide the only bona fide blockbuster moments of the entire set. The mayhem these songs generate provides a genuine sense of relief that Reddick and Co don’t blow it all in the end. And then it’s only during encores ‘Belgium’, ‘Baby One More Time’ (yes, the Britney Spears one) and ‘1985’ do the Soupers give their absolute all, as if it occurs to them that this really is the last hoorah, and they had better get their mosh on while they still have the chance.

And then it’s over, Bowling For Soup are consigned to the annals of rock history – as far as Birmingham is concerned at least – and it has to be said that when they do finally walk from the stage for the very last time, theirs will be a creditable entry.

Twenty years in rock and roll will take its toll on anybody and despite Reddick hinting that “this is more an au revoir than a goodbye” with a promise of occasional reunion shows here and there – I would suggest that on tonight’s somewhat weary showing, Bowling For Soup’s finale is not necessarily overdue, but definitely in the nick of time. 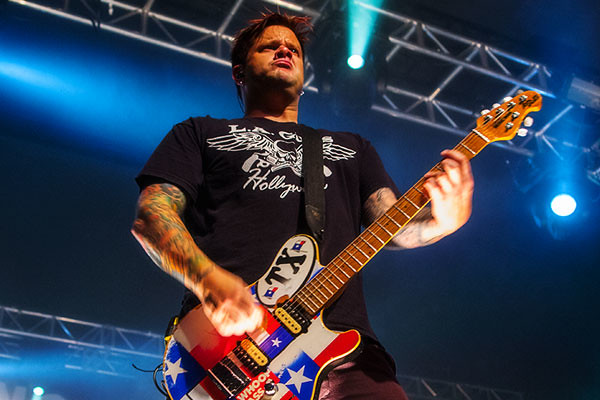