Whilst Villa Park has hosted its fair share of top flight names, tonight’s visitors – during the last 30 years –  have eclipsed premiership and champions league status, to become a band who are genuinely in a league of their own.

Bon Jovi, as with most things of longevity, has travelled a road not without its humps and bumps. The current “Because We Can” Tour is no exception, with founding father Richie Sambora opting not to make the trip, due to his ambiguously termed “personal issues”. With maverick Canadian axeman Phil X drafted in to reprise his 2011 fill-in role, when Sambora was sorting out previous personal issues in rehab, the band have offered affordable tickets but there has still been disgruntled rumblings, with many seeing the general prices as prohibitive.

However, none of these issues prohibit 25,000 + Bon Jovi fans from keeping the faith and pouring through the sun soaked Villa Park gates today. The crowd itself has an interesting dynamic. For many, the skin gripping spandex and foot binding stiletto leather boots of their youth have been abandoned for comfortable fitting “sensible” attire, with some requiring less peroxide in their hair to achieve that platinum look.

For others of a certain age, hair style is simply no longer an issue, as they mingle with a large number of fresher faces. These being the children of the Bon Jovi generation, born and raised on New Jersey rock ‘n’ roll – it’s probably safe to say a number of them would have been sparked into life with Bon Jovi as the soundtrack to their very conception! These youthful newcomers add their own impetus to the already charged atmosphere.

The stage set is one of the more impressive things you will ever see at a live show, with the band nestling in the middle of a thirty meter inflatable 1959 Buick, surrounded by a multitude of video screens. As they take the stage and Jon Bon Jovi motors up his entrance ramp, the faithful rev their voices beyond the red line to welcome the set opener ‘That’s What The Water Made Me’.

Having umpteen laps of the world rock circuit under their belts, this is just cruise control for Bon Jovi. So, they kick the entire place into overdrive early on, launching into ‘You Give Love A Bad Name’ and ‘Born To Be My Baby’. The response to which is an inevitable frenzy. The eternally youthful Jon Bon Jovi, with his stellar white toothy grin and indestructible boyish good looks, announces that everybody needs to be ready to give their best for a long night. The massive roar back from the crowd confirms that they are, as their resolve is tested with an exemplary ‘Raise Your Hands’.

The performance is as polished as the chrome on the massive Buick’s fenders, and it shines brightly. Tico Torres does everything with a flourish and unbridled puppy like pleasure that all drummers seem to have access to, while David Bryan, note perfect on his keys as always, provides his rock solid back-up vocals to Jon’s power lead. It’s near perfect chemistry, tried and tested over more than a quarter of a century, and it won’t break down now. As for Phil X – the question could almost be “Richie who?” but not quite.  It’s clear that Phil X is no spare part, he is in fact – a near perfect fit.

The show roars on at breakneck speed, with Jon romping through the likes of ‘Runaway’, ‘It’s My Life’ and ‘Keep the Faith’ in his Captain America jacket – wholly appropriate for this quintessential American frontman, of the quintessential American rock band. The gig is a relentless Bon Jovi jukebox, and the crowd sing every word without mumble or hesitation. You never forget the soundtrack to your life do you?

After ‘Amen’ and the sway-along anthem ‘Bed Of Roses’ allows everybody to catch their breath, it’s pedal to the metal all the way to the end of a full three hours of Bon Jovi magic. ‘Bad Medicine’ complete with skeletal video dancing girls is probably the highlight of the entire set, until ‘Living On A Prayer’ creates a new level on the Richter scale for crowd reaction.

Nobody wants to leave, including the band it would seem, but life goes on and as the curtain is brought down by ‘Blood On Blood’ it occurs to me that it has been a while since Villa Park has seen such unbridled joy. Given the fluctuating fortunes of the hosts and the sheer superiority, professionalism and extraordinary star quality of tonight’s guests, it could be a long time before it sees such scenes again. 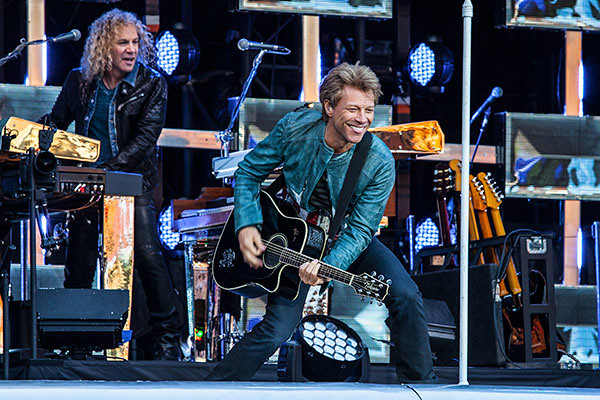