The penultimate UK show for Canadian demigods of metal, Anvil. Back on the road to promote their new album ‘Pounding The Pavement’, it’s an irresistible local affair I wasn’t going to miss.

You might not expect a band who have released seventeen studio albums over a thirty-seven-year period, to be playing a small rock club in a Worcestershire market town. But Anvil’s tumultuous career is the stuff of legend.

Influencing the likes of Metallica, Slayer and Megadeth, among others, Anvil endured an extended period of obscurity until the late 2000s, when they were the subject of an acclaimed documentary: ‘Anvil! The Story of Anvil’. This brought the band back into the spotlight, before playing a string of high-profile shows and reasserting themselves as a celebrated force among metal aficionados.

I last saw Anvil at Bloodstock 2012 with bassist Sal Italiano, but since 2014 the band has featured Chris Robertson, who joins founding members Steve “Lips” Kudlow and Robb Reiner, and tonight a packed house at The Iron Road welcomes the trio with adulation.

There’s a few moments for Lips to take in where he’s at, prior to stepping forward to greet the crowd. Lifting his Flying V to his face, he uses the pick-ups as a microphone for a verbal introduction before heading into ‘March of the Crabs’, the instrumental from the 1982 album ‘Metal On Metal’. Along with some initial banter and another couple of early classics: ‘666’ and ‘Ooh Baby’, both the band and audience get into their stride for two hours of high quality metal entertainment.

More recent material includes the party tune ‘Badass Rock ‘n’ Roll’, and from the new album comes the solid rocker ‘Doing What I Want’ – which is probably the perfect autobiographical title for Lips. Back to the early days with a Robertson bass solo into ‘Winged Assassins’ and a heartfelt dedication to Lemmy for ‘Free as the Wind’, there’s no doubt the first three albums – ‘Metal On Metal’ and ‘Forged In Fire’ in particular – have some decent tunes on them.

A welcome inclusion is the title track from ‘This Is Thirteen’, included in the career changing documentary which devotes time to the recording of the album. Lips confirms to us – as he has done for the last decade – that he paid his sister back for the album’s production. I guess he realises some people might be here for the nostalgia and feel-good factor of the film more than the music, but then again, I’m sure he doesn’t care.

There’s a strange moment when a guy pushes his way to the front and thrusts a magazine and pen into Lips’ face, seeking an autograph during the show it would seem. It’s the first time I’ve witnessed such a thing, but fair play to Lips who calmly and politely ushers him away. Far more enjoyable to watch is the Anvil standard, tongue-in-cheek and fun-filled guitar antics during the extended version of ‘Mothra’. Whipping out a dildo, Lips not only uses it for shredding, sliding and tapping out his solo, but also to waggle down the lens of any unsuspecting photographer!

The run to the end includes a couple of newbies ‘Bitch In The Box’ and ‘Ego’, and the pirate metal inspired ‘Daggers and Rum’. Lips proudly introduces his lifelong friend and loyal band mate Robb Reiner for a superb, jazz-influenced drum solo during ‘Swing Thing’.

The highlight was always going to be, set closer ‘Metal On Metal’, a song I distinctly recall hearing for the first time on the Tommy Vance Friday Rock Show in 1982. For all the time which has passed since then, for all the hardship, struggles and negativity which has followed Anvil, you can’t help but admire the balls it must take to believe in something so much.

The band return for a final thrash with ‘Running’ – from the brilliantly titled ‘Juggernaut of Justice’ album – and a cover of fellow Canadian Steppenwolf’s rock ‘n’ roll classic ‘Born to Be Wild’. A show that has everybody rocking out until the end – is testament to the ironclad bond between Kudlow and Reiner, staying true to their vow to rock together forever, as we all should. 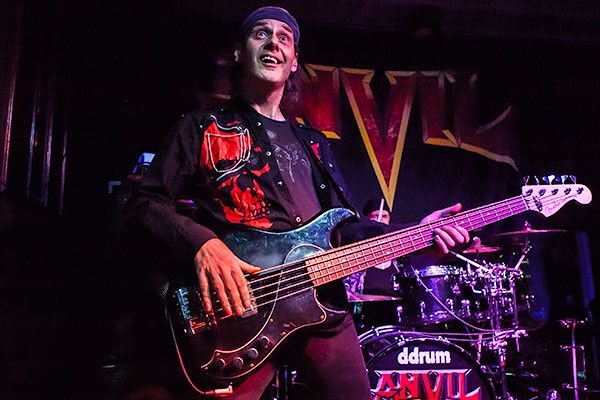