What is the best way to fill a live venue at the butt end of a fundamentally traditional Easter weekend? It’s a poser isn’t it? The Fleece in Bristol – a long time highly regarded rock music venue – does the simple but sensible thing; they book New Model Army.

It’s a master stroke no doubt. This band have been packing out circuit venues all over Europe for the last three decades, so I am more than happy to be here to witness Justin Sullivan march his raw melody men into this ancient port and preside over the latest West Country Family gathering.

Bristol has always been a New Model Army stronghold and as Sullivan and co. haven’t been seen in these parts for a while, it’s no surprise that we’re packed in with barely enough hammock space to billet a dwarf cabin boy. We wait, drenched in the heavy anticipation which hangs in the air.

Never a band for big entrances New Model Army saunter on and take their places as the fitting sea-shanty-esque ‘Vagabonds’ intro plays out over our heads. It slowly fades before there is a moments silence, a lull before battle, as Sullivan approaches his mic and begins to spit – with a vitriol that only he can master – the words and phrases of opener ‘Stormclouds’. The following want to show they are in good voice as they accompany, not compete, with Sullivan word for word. The song hurtles to its frantic conclusion, but before anybody has time to gather a roar of appreciation the band bring out the triple barrelled howitzer that is ‘No Rest’. The whole gig is elevated into a frenzy as New Model Army delivers this iconic slice of rock and roll belligerence.

Allegiances to this band are strong, fervent and everlasting and nobody is leaving here without making New Model Army 100% certain of their loyalty. So, tracks – which  Sullivan himself describes as “heartbreakers” – such as ‘March In September’ and ‘Did You Make it Safe?’ are met with howls and roars of approval. Life and limb is risked as followers balance on their cohort’s shoulders high above the floor. Sullivan at one point pauses to ponder the wisdom of this, but it’s nothing he hasn’t seen before, as he leads his band headlong into the NMA standard ‘White Coats’ which is delivered with particular conviction.

New Model Army have always recruited personnel from the rank and file rather than the musician’s officer classes. It’s always been a philosophy of the right man for the right job, it’s a policy that has succeeded over the years and the current lieutenants are clinical in the execution of the live battle plan. There is an obvious chemistry between guitarist Marshall Gill and bassist/Nordic warrior Ceri Monger as they share plenty of jokes whilst providing an unbroken driving force behind Sullivan’s lead. Whilst Dean White’s cascading keyboards underpin the entire assault, a special mention must go to stand in drummer Andy Woodward, taking leave of his usual Adam Ant duties to provide an admirable contribution in the absence of the walking wounded Michael Dean.

On it goes as New Model Army yomp their way through ‘I Need More Time’, the insane ‘Get Me Out’, ‘Christian Militia’ and the rather fitting ‘Here Comes the War’. Sullivan, twisting and contorting his face and black, shark like staring eyes, leads us around every syllable. It’s true to say that he doesn’t just sing, he really does perform every song, and it’s totally hypnotic to watch.

‘What A Way To Go’ speaks for itself as a closer and the Family bellow for the bands return, willing to give everything they have for their heroes. New Model Army are not about to leave them hanging as they return with encores ‘The Price’, ‘Archway Towers’ and a special bonus track ‘Seven Times’ but it is THE anthem ‘Green And Grey’ that erupts the followers to their greatest exertion.

New Model Army leave the fray for the final time. The Family, this band of brothers – who have followed their generals through all times, good and adverse – are left shell-shocked but happy that the mutual loyalties between band and followers have been starkly reinforced this night. 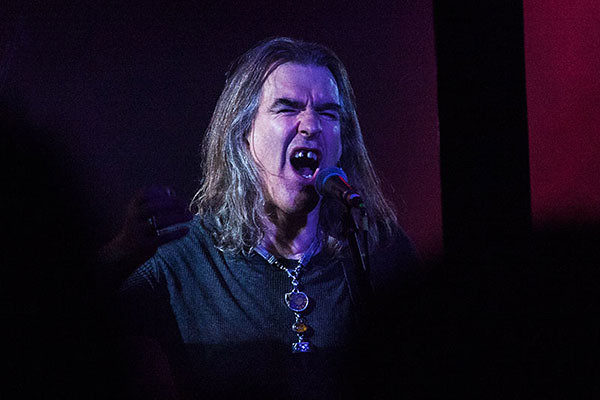