Further to the release of their fifth studio album ‘The Last Hero’ Alter Bridge – with their do no wrong lead vocalist and guitarist Myles Kennedy – are in Nottingham on a run of UK arena shows.

It’s not very often you’re left thinking “well, follow that” prior to a set from a headline band of Alter Bridge’s magnitude, but in the case of Volbeat they really did a little more than just “warm-up” the crowd at Nottingham’s Motorpoint Arena tonight. Along with France’s progressive titans Gojira and New Zealand rockers Like A Storm, all kudos should be heaped on Alter Bridge for putting together a fantastic billing on this current tour.

It’s pretty much a simple walk-on for the Floridian hard rock goliaths. There’s no drawn out, over indulgent introduction, just a simple get up and get on with it attitude – although the roar of adulation and screams of delight must be something for the quartet to savour, each and every time it happens. From the new album comes ‘The Writing On The Wall’ to set both band and audience on their way.

The tone and trajectory of Myles Kennedy’s four-octave vocal range is no less impressive live than it is recorded. Progressing into the first half of the show with tracks such as ‘Farther Than the Sun’, ‘Ghost of Days Gone By’ and the pummelling opener to the ‘Blackbird’ album – ‘Ties That Bind’ – he is pitch perfect across each individual style, along with the superbly combined backing vocal of fellow guitarist Mark Tremonti.

“Good evening! I’ve been watching the other bands. What a great fucking night!” says Kennedy, re-affirming my own thoughts and talking about the honour of playing with such a dream line-up. He introduces Tremonti to the fore, asking Nottingham to make some noise, especially as tonight is being recorded. Tremonti takes up lead vocal on ‘Waters Rising’ proving himself to be no slouch in this department, if perhaps not up to the same standard as his songwriting partner.

I’ve heard it said that an Alter Bridge show is nothing spectacular to talk about. Well, ok, apart from half decent lighting production and a video backdrop there is nothing visually exciting to report. But this is a band who are just about the music, with a catalogue of superb songs to draw from. What more could you want? From the latest album is the heavy, killer riff laden ‘Crows On a Wire’ – the metaphorical punch in the face for anybody even prepared to answer that question.

On the eve of his 47th birthday, there comes a reminder from the front with a crowd sing-along of ‘Happy Birthday’. Kennedy plays down any wish to celebrate an advancement in years: “You’re very sweet.” he says “But I don’t wanna fuckin’ know about it!” From here the stand-out moment of the night – his solo performance, with acoustic guitar, of ‘Watch Over You’.

Amazingly, (although I gather this happens at all shows on this tour) a young member of the audience is given a guitar. “This young guy will be on stage one day!” proclaims Kennedy. Well, even if he’s not, that’s one hell of a souvenir for any kid to receive from a rock star idol. No doubt the lucky recipient is clinging tightly to it during the epic, soul piercing rendition of ‘Blackbird’ before ‘Metalingus’ and a mass arm waving ‘Open Your Eyes’ completes the main set and Kennedy lets rip his appreciation: “Nottingham, we fuckin’ love you. We’ll see you next time!”

Back for ‘Show Me a Leader’ and ‘Rise Today’, Alter Bridge receive a packed Nottingham arena ovation to prove their worth. Not only is Myles Kennedy one of the best vocal talents on the planet but the band and – most importantly – the songs, make them a package of real class and distinction. 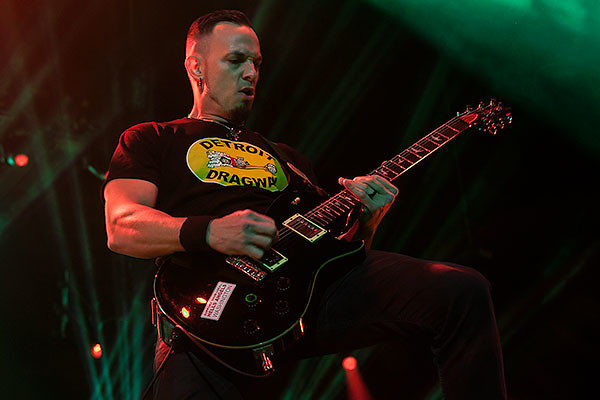