Today marks the start to a very long awaited subsidence of general election fever in the UK and I couldn’t think of a better way to go about clearing my head of the political garble than with a dose of Therapy?

Further to Andy Cairns falling ill at the start of their ‘Disquiet’ tour, tonight is a re-scheduled show which packs out the Gloucester Guildhall with generations of the bands ever increasing fan base.

Therapy? have been delivering empowering alt metal tunes for over two decades, perfectly highlighted with opener ‘Still Hurts’ from their latest album, followed by the Joy Division cover ‘Isolation’ and ‘Die Laughing’ from the 1994 magnum opus ‘Troublegum’. Cairns introducing the latter with: “I’d like to dedicate this song to John Lennon, Kurt Cobain, Phil Lynott and Errol Brown” – it’s a tribute to which the house audibly concurs.

The set reveals track after track of self-loathing, skewed humour and psychosexual trauma all tied up with a keen pop sensibility and willingness to draw upon diverse sources of inspiration. There’s plenty from the bands fourteenth studio release ‘Disquiet’ including the frenetic ‘Torment Sorrow Misery Strife’, the raucous ‘Insecurity’ and the seven-minute album closer ‘Deathstimate’ which includes the bleak refrain: “The road ahead looks shorter than the one behind. Either way I’m no closer to wisdom.”

While new material stands up well against the back catalogue, it’s for the numerous legendary songs that many are here, and they are not disappointed. From their first major label album release ‘Nurse’ (1992) we are treated to ‘Nausea’ and ‘Teethgrinder’. Off ‘Troublegum’ Cairns & Co whip the Gloucester crowd into a frenzy with ‘Turn’ and the teen angst-ridden classic ‘Screamager’, and from the follow-up album ‘Infernal Love’ (1995) comes ‘Stories’, the beautifully dark ‘A Moment of Clarity’ and the Hüsker Dü cover ‘Diane’.

Therapy? show no signs of growing old gracefully. Andy Cairns with his distinctive growling vocal surveys the crowd with those crazy eyes, while bassist and fellow Northern Irishman Michael McKeegan grins inanely throughout. It’s clear that these guys are still having fun, along with the metronomic Neil Cooper who hammers his case out from beginning to end.

Playing Gloucester for the first time, Cairns is eager to repeat his appreciation for everybody’s support – “we’ll definitely be coming back” he assures them. The encore begins with him battering out the opening chords to ‘Knives’ with ecstatic Troublegummers throwing back the line “My girlfriend says…” before they go completely nuts.

‘Skinning Pit’ is the first of two golden tunes from the 1991 mini-album ‘Pleasure Death’ which gives a cogent tipping of the hat to Therapy?‘s punk roots. ‘Potato Junkie’ follows with the roof-raising sing-along: “James Joyce is fucking my sister”, before the incendiary ‘Nowhere’ almost blows it off.

Twenty years on from their period of mainstream flirting Therapy? remain a highly infectious breed of band, always managing to sound like they have something important to say about the trials and tribulations of life. With that, their live performance never waivers, and it should be a long time before they consider calling it a day. 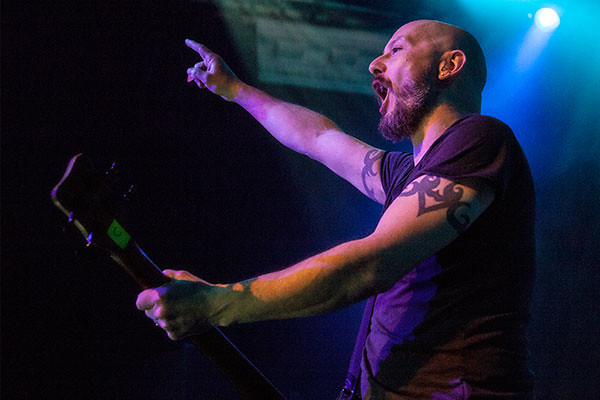