It’s the given task of Fallujah to provide the best of rude awakenings on a bright Saturday morning and they prove that they’re more than up to the job with a battering early bird set.

Winterfylleth’s English folk lore driven death metal is perfect for the beautiful English country setting and they gain the approval of everyone who has come out to watch before noon, whilst Havok have descended from the Rockies to shake the remaining sleep out of everyone’s brains with some high impact Denver thrash metal. This is breakfast Bloodstock style – chunks of metal goodness.

King 810
Due to an unfortunate ongoing situation with guitarist Andrew Beal, fire arms legislation and his local law enforcement agencies, King 810, are reduced in number by one. Forced to take the stage as a three piece, using guitar tracks or an anonymous off stage player – it’s unclear which – kudos to the Michigan outfit for still making the gig and serving up a set full of bile and aggression. Opener ‘Alpha & Omega’ is a high point, but when video clips on the big screen start to become more interesting than the performance, it’s probably time to re-think your stance on certain constitutional rights.

Annihilator
From the moment that Canadian metal stalwarts Annihilator take to the stage – guitarist, frontman and founder Jeff Waters makes it clear just who’s in charge. Directing the pit before he’s even struck a chord, “I wanna see both those hands where I can see them” he barks. As all hands reach for the sky, he’s not going to frisk anyone, but he is going to thump fillings right out of mouths, with classic, riff laden metal standards such as ‘King of the Kill’, ‘Alison Hell’ and ‘Human Insecticide’.  The increased swell in crowd numbers is a mark of the esteem in which Waters and his accomplished outfit are held among metalheads. He keeps a smile on his face and the watchers where he wants them – in the palm of his hand. “Are you with me Bloodstock?” he bellows. Yeah Jeff, always, being the obvious answer to that.

Municipal Waste
As the Virginians saunter on stage frontman Tony Foresta declares “WE’RE MUNICIPAL WASTE – AND WE’’RE BACK!”  Only this guy, from this band, could make that sound like a threat, and one which will totally be made good on.  The pit is a swirling hurricane of seething human bodies, as the one thousand mph speed metal wail of Municipal Waste stirs up chaos all around. And that’s the magic ingredient – chaos for the sake of chaos – as ‘Headbanger Face Rip’, ‘Terror Shark’ (show me those fins!) and ‘The Thrashin’ of the Christ’ delight and frenzy all those who bear witness.  Insanity is contagious and more than a few fringe dwellers dive headlong into the most intense pit you could wish to see. For the second time in as many days a world record is claimed as over seven hundred crazy bastards (yes you did read that correctly) crowd surf to one song. This one is verified by a real live bod from the Book of World records, so if someone should tell you they were in a record breaking mosh pit at Bloodstock 2017, you’d better believe them. It’s true as sure as Municipal Waste are the maddest sons of bitches on the planet.

Hatebreed
Hatebreed return to Bloodstock to collect their hat-trick ball with the confidence from experience now visibly oozing out of them. Now as veterans and pace setters, all those present look to have any residual silliness slapped out of them by the Connecticut outfit. Hatebreed guide the pit back to the slamming, jumping entity it was, with irresistible hardcore metal tracks ‘Live for This’ and ‘Tear It Down’. Frontman Jamie Jasta does carry the greater load of Hatebreed’s public image, but is quick to give deserved props to his band mates for their contribution to this superb product, especially drummer Matt Byrne who is indeed a cornerstone of much that Hatebreed do. Bassist Chris Beattie is like a hyperactive bobble-head doll who has found heaven with a bass guitar and he plays with the freedom of a wild horse. Jasta is also quick to give his admiration to makers of real amplified music and his disdain to the laptop imposters who claim to do the same thing. There’s also a nice tribute to tragic heroes Cornell and Bennington and a reminder to look on each other with kindness. Hatebreed have matured nicely into an expert live act and appearance number four at BOA can’t come quickly enough.

Kreator
Up until this point, visually at least, it’s been a case of what you see is what you get. German metal elders Kreator are about to change all of that. An impressive Gothic graveyard stage set has been put in place, ready for their arrival. As they rip into ‘Hordes of Chaos’ a huge confetti bomb explodes over the entire arena and the endlessly energetic pit dogs swirl in a manner befitting the song.  It’s all pretty symbiotic stuff. Mille Petrozza leads everyone into ‘Satan is Real’ and a magnificently impressive 3D effigy of the Big L is unmasked to lend even more breath-taking visuals to the emphatically precise metal onslaught that ceaselessly slices into us. There is a proliferation of fist pumping moments from the Saxon masters and Petrozza conducts singalongs with regularity. ‘Gods of Violence’ and ‘Total Death’ are delivered like massive heart attacks and the images projected onto the stage screens during ‘Fallen Brother’ remind us of the icons we have loved and lost, adding more poignancy. Everything Kreator do is fastidiously engineered. Vento and Christian Giesler lay down perfect foundations for the guitars of Petrozza and Sami Yli-Sirnio.  Yli-Sirnio drifts off into his own space, which is clearly where he formulates the astonishing fluidity of the lead work he parades here. The biggest party popper ever sends silver streamers festooning over the gathered masses and onto the overhead lighting and PA rigs – where they will remain as a reminder of Kreator’s brilliance for the rest of the day. Not that we’d need reminding, because if this blockbuster of a performance doesn’t stay ingrained in your memory – you surely weren’t there.

Ghost
About fifteen minutes of light choral music precede the entrance of Ghost. They might call it “setting the mood” but for others it’s just pissing about! Once the sun disappears behind the horizon, it’s way too cold to be kept waiting longer than necessary, and the cries of “get on with it!” are well merited. However, when Tobias Forge – or Papa Emiratus III as he likes to be known while working – takes to the stage, we’re more than ready to take part in the ceremony. To be fair it’s a glorious, spiritual union, with Papa and his nameless elemental ghouls (bet you never thought you’d see Earth, Wind and Fire perform at Bloodstock. huh?) Ghost are visually stunning, meaningful and choreographed in detail. The pit is stunned into stoic acceptance, as pop-metal opener ‘Square Hammer’ nails us to the spot in awe. Sparks fly and there’s pyro aplenty as the robed figure of Forge – the sinister minister – presides over his fallen flock. After a stern warning about inappropriate touching (strange for a priest, no?) he sends his porno-esque nuns – The Sisters of Seed – into the pit, to bestow communion gifts upon the faithful as ‘Body and Blood’ is played out. The nameless minions are pretty polished musicians and their accompaniment to Forge’s theatrics are pretty impressive and tight as a nun’s .. well y’know. A quick costume change into the style of an 18th century anti-pastor and Forge barrels on. ‘He Is’, ‘Mummy Dust’ and ‘Ritual’ sweep over us like a majestic dark shroud of sound. Papa Emiratus is not just preaching to the converted here, he’s actively gaining more acolytes, so by the time ‘Monstrance Clock’ brings the curtain down on a fine rock theatre performance – his congregation has swelled and the sales of white and black face paints are sure to rocket as a result. Winners all round then. 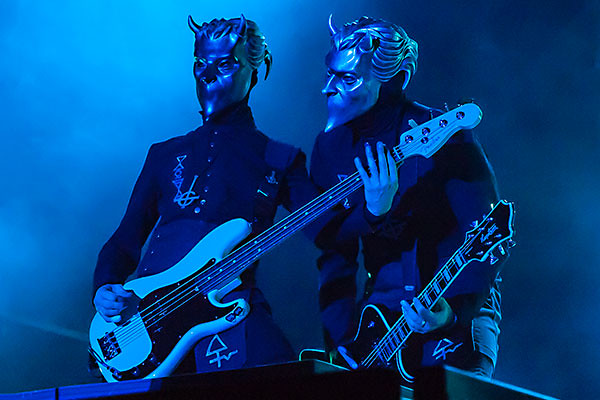