Veteran shock rocker Alice Cooper is on his first UK tour for five years. Offering a triple-bill of entertainment with The Mission and The Tubes in tow, Birmingham plays host to the third of five shows.

A few months away from celebrating his seventieth birthday and with the recent release of his twenty-seventh studio album ‘Paranormal’, there is no slowing down the legendary godfather of shock rock. Dressed in black, wielding a cane and displaying the energy of a man half his age, Alice Cooper steps out under a waterfall of sparkling pyro, to receive an ovation from an audience made up from every decade of his existence.

Up and away with ‘Brutal Planet’ and ‘Under My Wheels’ the first minor costume changes see Alice in a military style jacket followed by a leather waistcoat, his cloakroom attendant being a girl appearing out of a pink box at the back of the stage. However, it’s the lady taking centre stage with Alice who grabs the attention of most. Nita Strauss, ex-member of ‘The Iron Maiden’s’ and ranked #1 on Guitar World’s list of ’10 Female Guitar Players’, Ms. Strauss is one hot player, with added wow-factor, pulling all the shapes you could wish to see from any iconic guitarist.

Early on I’d expected to hear tracks from the latest album, but instead Alice delves way back into his forty-seven year archive for numbers such as ‘Pain’ and ‘Department of Youth’. The ‘Paranormal’ album was given an airing on the PA prior to showtime, but it seems a tad out of the ordinary not to hear some new material. But then again, since when has Alice Cooper been an ordinary performer?

‘Woman of Mass Distraction’ leads to Nita Strauss being given the floor to prove she is exactly that. Following a great solo comes the intro riff to ‘Poison’ and a white-shirted Alice is back out on parade for the 1989 hit from his album ‘Trash’. It’s then that the real theatrics begin to be wheeled out. Fan favourite ‘Feed My Frankenstein’ includes a giant electric chair for Alice to sit in before reappearing as a giant monster lumbering around the stage. A less showy ‘Cold Ethyl’ sees him physically abusing a life size doll – all done in the best possible taste of course.

The 1975 ballad ‘Only Women Bleed’, in which Alice murders his clockwork sweetheart, makes way for the one and only new song of the night – ‘Paranoiac Personality’, before he is forced into a straight-jacket by a couple of masked hoodlums for ‘Ballad Of Dwight Fry’.

Approaching the climax of the show, the giant guillotine appears for ‘I Love The Dead’. Perhaps not so “shocking” in 2017 the blade falls and chops off Alice’s head. As the severed noddle is paraded around the stage by the band, the crowd cheer with appreciation. OK, it might be the same stuff seen time and time again, but it makes it no less entertaining.

Alice and his present-day cohorts leave the stage and within a few short moments the crowd find themselves watching something rarely seen since 1973. The Alice Cooper Band featuring original members, bassist Dennis Dunaway, guitarist Michael Bruce and drummer Neal Smith, reunited to perform a five song mini-set of their classic hits with Alice.

With current band member Ryan Roxie filling in for the late Glen Buxton on guitar, the original line-up – with Alice in a gold, snakeskin suit – storm through a bunch of classics which they made famous nearly half a century ago. Raw versions of ‘I’m Eighteen’, ‘Billion Dollar Babies’, ‘No More Mr. Nice Guy’ and ‘Muscle of Love’ leaving the crowd eager for more.

Alice stated recently that when the original band broke up in 1975, there was no bad blood and that everybody just went their own way. Having stayed in touch and coming back together during 2016, the next logical step was to rekindle their friendship, doing what they do best – performing as one the greatest live rock bands in history. Certainly, tonight in Birmingham, this proves to be a hit with fans and great fun for the band themselves.

In top-hat and tails, Alice re-emerges to orchestrate a grand finale. In amongst the pyro, confetti, bubbles and giant balloons, both bands hit the stage to finish with ‘Schools Out’, including a couple of verses of Pink Floyd’s ‘Another Brick In The Wall’.

“School’s Out Birmingham!” screams Alice. “The nightmare is on us. Thank you!”  With that, he and both bands disappear and the crowd return their thanks. It’s a rocking end to a superb show and I can’t see that anybody would suggest that they’ve not had their money’s worth. 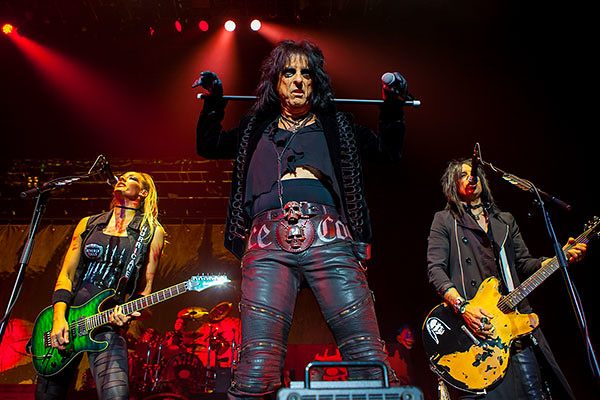