As we lament the passing of yet another island summer that never truly materialised, we can console ourselves with the fact that the autumn touring season is now open, and saunter down to the O2 Institute in Birmingham to see the return of Bush to their home shores.

Bush are just one band in a cultural lend lease programme with our cousins from across the pond with a greater slice of the band’s success coming Stateside. Now very much an Anglo-American affair, our mates from the States do have a credible claim to them. However, the large turnout tonight is a reminder to everybody that Bush – in essence at least – are ours, and fiercely proud of them we are too.

It’s something of a stuttering start and although openers ‘Everything Zen’ and ‘Nurse’ are pleasing enough, the audience appear to be caught unawares and their response is equally patchy. Still, once the sound guy has got his ear in, frontman Gavin Rossdale swears an oath to deliver on fan requests and newbie ‘This Is War’ is shown off. It’s then that jackets are ditched, sleeves are rolled up and Bush come out swinging with ‘Prize Fighter’. It’s right on the button and all of a sudden we’ve really got us a gig.

Rossdale bounces up and down on the balls of his feet like an impatient child who can’t wait to blurt out his stories of angst, hurt and an unfair world, as he delivers his lines with a brilliantly rich vocal. Guitarist Chris Traynor peers out into the faces, smirking, perhaps because he knows his clean guitar work is good for them. Meanwhile bassist Corey Britz pounds out his straight as an arrow bass lines and quality backing vocal as Bush blast through classics ‘Sound of Winter’ and ‘Let Yourself Go’.

Gavin is, as ever, charming and engaging with the audience, an ever present and disarming grin across his face as he chats with us like the old friends that we are. He seems to possess and inject a calm enthusiasm into all those around him. His once boyish good looks are gone, now seamlessly aged into smouldering and mature handsomeness … bastard! 🙂

As all out sing-a-long anthem ‘Swallowed’ begins, there actually seems to be a moment, a collective half gasp, as innumerable teenage, high school and college memories flood back into the minds of many of those present. Their attachment is done justice with a passionate rendition of the song.

Hanging out around the drum riser of Bush original Robin Goodridge – Traynor and Britz synchronise themselves with his faultless timing and energetic flow, as ‘Lost In You’ and ‘The Gift’ are received with gratitude by the gathering.

Pre-encore closer ‘Little Things’ turns into a really big deal as Rossdale clambers into the crowd and communes with the delighted crowd, forming impromptu jump around groups wherever he stops. To his credit Gavin really does try to get around to all four corners of the arena to get everyone involved. It appears that Bush preach and practice an “everybody included” fun policy where their gigs are concerned.

‘Machine Head’ begins a four song encore and after a fine version of R.E.M.’s ‘The One I Love’. the rest of the band leave Gavin alone for a private moment with the audience in order for him to deliver a beautiful solo shot of ‘Glycerine’. The proliferation of phone and tablet screens (the gig curse of our time) obscuring the view suggests that the experience Rossdale tries to share is, unfortunately, lost on most. Oh well, not to worry, because these modern trifles are soon forgotten as ‘Comedown’ raises the bar sky high once more, sending everybody home happy.

As Gavin says, the Institute is very much a beautiful building. It is also cavernous, and tonight once the seed was planted, Bush grew and grew until every square inch of it was filled with their brand of wonderment. Very, very impressive. 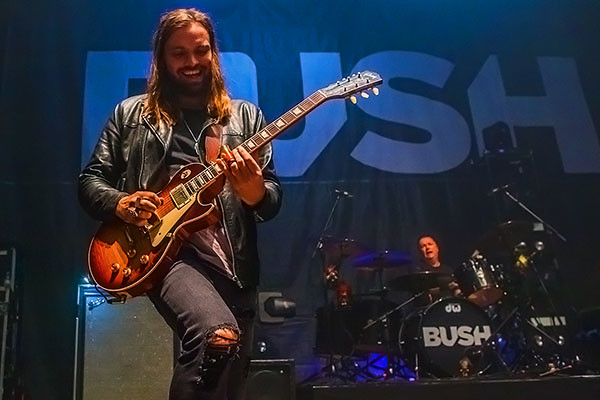