Pre-Christmas gigs always have a hit or miss quality about them, but there’s an acceptable gathering for tonight’s outing by Sweden’s very best garage punks.

Glad to be out of the sub-zero temperature and drawn by a band who have consistently delivered over the twenty years of their existence, the buzz of this crowd is abundantly apparent as the classical intro engulfs us all.

The Hives, resplendent in their top hat and tails, make their entrance and hammer straight into the pumping number ‘Come On!’ From the outset it’s difficult to understand where frontman Howlin’ Pelle Almqvist gets all of his energy from, as he clambers over the entire stage set as if it were a school sports day obstacle course where winning is everything.

Almqvist clearly doesn’t get enough of a response during ‘Try It Again’ and ‘Take Back The Toys’  as he resorts to pleading with those present – to up their contribution – prior to ‘These Spectacles Reveal The Nostalgics’. Persistence does finally pay off as the gathering finally thaw out, and after some chronically un-PC (but undeniably funny) anti-Danish rhetoric, The Hives are spectacularly up and running as they romp through ‘Main Offender’, ‘Walk Idiot Walk’ and ‘My Time Is Coming’.

The show is a sum of its parts – Almqvist with his stage acrobatics and jagger-esque posturing is backed up to the hilt by the high octane guitar performances of Nicholaus Arson and Vigilante Carlstroem. The mock exasperation and seemingly endless supply of plectrums of bassist Dr. Matt Destruction and the attempts of drummer Chris Dangerous to muscle in on Almqvist’s stage gymnastics – all add to the complete entertainment experience. Even the Ninja stage crew are all important components of an audio visual display that sets the bar stupidly high for any would-be emulators.

Everything eventually falls into place for the Swedes tonight, and by the time maximum audience participation is achieved with ‘Wait A Minute’ – Almqvist holds them all in his hand, like a rubber ball, which he then proceeds to bounce off all four walls and the ceiling for good measure.

Despite nearly being lost to the pit several times doing a barrier walk during ‘I Want More’, Almqvist remains in full control, and after a crash course in Hiveland mathematics – ‘Hate To Say I Told You So’ sends the entire gig into cartoon rock rapture.

The Hives wrap the whole Christmas gift of a show up with a three track encore, topped with ‘Tick Tick Boom’, which judging by the  manic response, proves one old adage at least. It’s not how you start – it’s how you finish that counts. 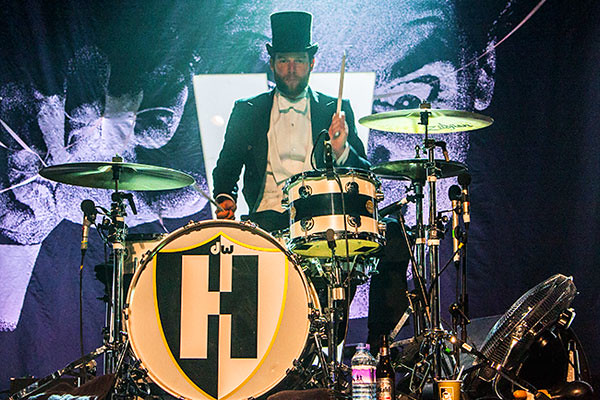