Following the release of their long awaited second album ‘III’, Manchester welcomes Chickenfoot, on the first of only five European tour dates to be played since July 2009.

Manchester Academy heaves with anticipation for the ‘supergroup’ that features guitar hero Joe Satriani and Van Halen duo, bassist Michael Anthony and frontman Sammy Hagar. Whilst Chad Smith is currently at his day job with Red Hot Chili Peppers, his sticks have been temporarily handed over to one of the world’s most in-demand drummers, Kenny Aronoff.

Emerging to a hero’s welcome, Satch stands spot-lit, a single chord sustained. Anthony and Aronoff prepare as Hagar comes bounding on to a roof-lifting roar, and we’re off with ‘Lighten Up’, the awesome builder of a track from the recent album release. With the majesty of rock performing for us, the opener is over, and before we know what’s happened we’re into the epic sing-a-long ‘Alright Alright’.

Taking into consideration the combined calibre, decades of experience and possible levels of self-preferentialism – it turns out that all you actually get with Chickenfoot, is a bunch of blokes, having a good time, playing a collection of great songs. Easy to say, but it’s absolutely what you get, no question. ‘Big Foot’, ‘Sexy Little Thing’ and ‘Soap On A Rope’ – all just fantastic, driving rock n roll numbers.

Sammy Hagar has a completely relaxed rapport with his audience, be it draping himself in a union flag thrown on-stage, or when pulling beers from a bucket and asking the crowd which is their preference – John Smiths or Old Speckled Hen, to agree with the vast majority that it is the latter. Covering every inch of the stage, ‘The Red Rocker’ doesn’t falter, with a vocal that is as strong as ever, it’s a pleasure to see and hear this guy perform.

Knowing what Satriani does best, it’s great to see him fit seamlessly into this standard line-up scenario. For the main part he simply chugs away at the groove laden riffs which make-up the Chickenfoot catalogue, before stepping forward – as and when a song requires – to unleash a jaw-dropping solo.

Numerous tracks come from the 2009 eponymous debut album, with ‘My Kinda Girl’ and ‘Down The Drain’ highlighting how crucial Michael Anthony’s bass lines and backing vocals are to the sound of the band. Along with – at this time – Kenny Aronoff, the Chickenfoot rhythm section is pounding along.

There’s a fair age range in here tonight, perhaps some dads out to show their lads how it should be done, but certainly the Chickenfoot vibe appealing across generations. Outlined to all by Hagar: “We made an honest record, playing music that we want to hear, and it must be what you want to hear – or you wouldn’t be here.”

Hagar straps on a Les Paul for ‘Future In The Past’ which completes the main set, before an encore of the anthemic ‘Different Devil’, the groove of ‘Oh Yeah’, and a scorching cover of the Jimi Hendrix Experience classic ‘Foxy Lady’.

I’m pleased to say that with no reference to any other band, a Chickenfoot gig is just about Chickenfoot. Four musicians of a fine pedigree, performing and delivering high quality songs, to a level of expectation and way beyond. 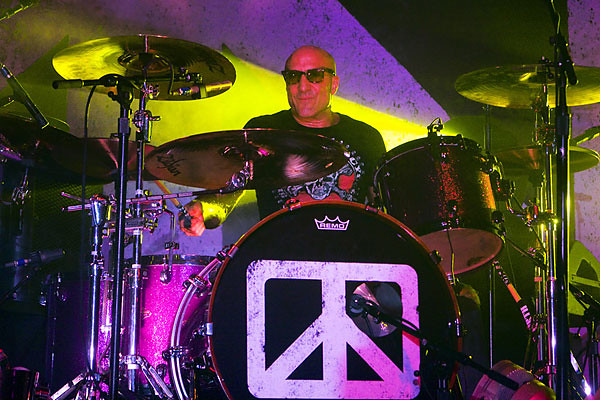