Today Milton Keynes Bowl plays host to the first of two rescheduled Foo Fighters dates. Along with them, Iggy Pop, and just for starters the mighty Royal Blood.

So much has been written and said about Royal Blood it’s hard to believe the Brighton formed duo of Mike Kerr and Ben Thatcher put the band together just two years ago, and I genuinely struggle with the fact that their self-titled debut album was only released at the end of August last year. But knowing those songs so well, hearing the support from around the National Bowl and seeing their confidence as they take to stage during the Jay Z ’99 Problems’ intro, you just know they’re going to nail it.

And nail it they do, from the off, with ‘Come On Over’ and ‘You Can Be So Cruel’ being the initial smack in the face for any doubter of the drum-kit and bass only live configuration. Kerr and Thatcher are on a mission, pounding out with sonic force their Godzilla-like sound; snarling and as punctuated as you expect it to be.

“Help us out!” shouts Kerr as he starts a clap-along to the stomping ‘Figure It Out’. I think any suggestion of miming (which I have heard) is just simple disbelief about what he gets from his toolkit. A closely guarded secret, his pedalboard is known to contain some strange devices, but whatever the inner gubbins of his set-up may be, the huge bass sound and tones play out live no different to what you hear on the album.

Having played at Reading and Leeds Festival last weekend Royal Blood are no strangers to appearing in front of large numbers. The crowd continues to pile in to the National Bowl between 5.30 and 6 with Foo Fighters not due on until 8.15, but it’s still a pretty sizeable audience here. “We’re relieved you came out early. Thank you.” says Kerr, introducing Thatcher to the audience for the massive ‘Little Monster’.

Rolling on with ‘One Trick Pony’, ‘Ten Tonne Skeleton’ and ‘Loose Change’ there is of course a certain attitude displayed to match the musical delivery. Frontman Mike Kerr probably maintaining it for the better out of the pair, as Ben Thatcher is distracted on several occasions from his cold, vitriolic glare into moments of cheeky chappy, ear-to-ear grins. But hey, who would deny him the fun-factor of his performance, especially sat behind a kit paying homage to Taylor Hawkins, with a picture of the man himself from the hilarious ‘Learning To Fly’ video on his bass drum.

‘Out Of The Black’ completes the set, ending with the riff from Black Sabbath’s ‘Iron Man’. I’m not sure what percentage of today’s wide ranging audience will recognise the tune, but for those who don’t, hopefully it will act as an education. It definitely receives appreciation from those of us old enough to know, along with being impressed about this young band. Roll on the second album, which is apparently currently being written. 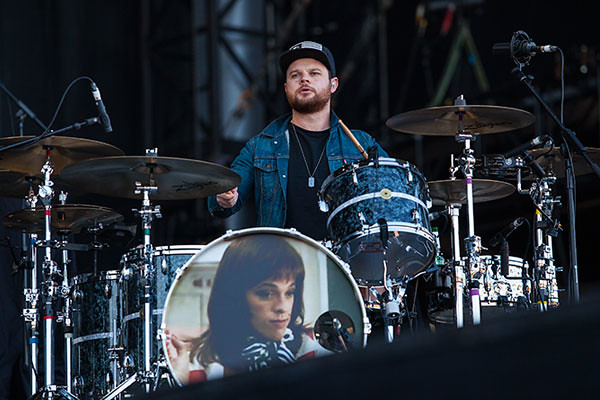