Further to this came the announcement they would kick off their European tour with two shows in Manchester, as well as headlining the Saturday night at the Isle of Wight Festival. Like many, I’d been disappointed to learn that once again the band had chosen to minimise their UK shows –  I would have liked options other than the gargantuan MEN Arena.

Tonight’s pre-show buzz and the entrance of Eddie Vedder (vocals), Stone Gossard (guitar), Jeff Ament (bass), Mike McCready (guitar) and Matt Cameron (drums) into the 21,000 capacity arena, clearly defines that Pearl Jam were never really a grunge band. The reception is huge; the adulation is palpable, as they emerge like the classic rock masters, from whom they draw much of their influence.

Set opener ‘Metamorphosis 2’ is performed in near darkness, the preamble before launching into ‘Release’ from the massive debut album ‘Ten’, now one of the highest-selling rock albums of all time. Eddie Vedder is quite sublime in presence, performance and vocal ability. His appearance is distinguished, his hair a little shorter than in his youth, with facial hair giving him the look of an ageing rock star. “How are you doing?” he asks, sincerely. “It’s a question we ask of you as a collective, but we mean it individually.” The response comes from an audience completely in awe, a notably remarkable bond.

Video screens show the band in grainy black and white, as they rifle through a 150 minute set which covers the breadth of their career. ‘The Fixer’ from the latest album ‘Backspacer’ released 2009, fits in seamlessly with classic tracks like ‘Small Town’, ‘Even Flow’, ‘Nothingman’ and main set closer ‘Why Go’.

‘Pilate’ is played tonight, apparently for the first time in Europe since June 2000, exactly twelve years ago. And the Buzzcock’s cover ‘Why Can’t I Touch It?’ is performed for the first time ever. Vedder may no longer take death-defying stage dives off lighting rigs, but the energy still surges through him and the rest of the band. The entire performance shows one of the most influential outfits of the 90’s, still totally in love with their own music, which in turn clearly means an awful lot to the many thousands of people here tonight.

The band return for two encores, totalling an additional hour to the main set. Within this time the audience is treated to, amongst others, the beautiful acoustic ‘Just Breathe’, and the outstanding favourite of many ‘Jeremy’. When Vedder acknowledges the recent fatal accident involving Radiohead’s drum tech, you can hear a pin drop. This is followed by the epic ‘Alive’ and the classic Neil Young cover ‘Rockin’ In The Free World’, before the mammoth show is over.

Along with Nirvana, Pearl Jam were initially known for the Seattle sound that exploded in the early nineties. By broadening their heavy sound, while maintaining an emotional depth, they became a rock institution, and to see them live brings this fact well and truly home. 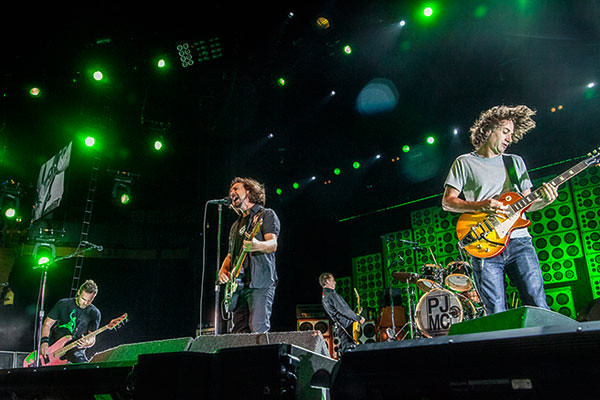