Few bands from the hair metal 90’s could create such a buzz about a co-headlining tour, but having sold millions of albums between them, US rockers Skid Row and Ugly Kid Joe are out to prove their individual shows still have what it takes to rock an audience, two decades since their conception.

Ugly Kid Joe returned last year – after a 15 year hiatus – with a brand new EP entitled ‘Stairway To Hell’ and a successful run of Summer festival dates including an appearance at Download Festival. At the end of the year they were in the UK again playing support to theatrical shock rocker Alice Cooper, as well as co-headlining dates with Duff McKagan’s Loaded.

Apart from the singles of the time, I never gave Ugly Kid Joe much of a listen. I guess I never really thought of them being anything more than those few songs. So, as they hit the stage with frontman Whit Crane receiving a resounding welcome, I’m expecting this to be no more than part of the whole nostalgia package. My assumption is exemplified by Crane’s apparent inability to age beyond his MTV days, retaining irritatingly youthful looks for a 45 year old.

Kicking off with a track from each of their three full-length albums, Ugly Kid Joe steam through ‘V.I.P.’, ‘Dialogue’ and ‘Neighbor’, delivering a massive wave of self-assured energy and fun-factor. Crane stalks the stage, standing tall on the edge, before leaping into the photo-pit to get up close and personal with the first few rows.

Meanwhile, fellow forming member and guitarist Klaus Eichstad surveys the crowd, dressed to impress in his Madonna-tallica t-shirt and knee-length skyline socks, whilst touring guitarist Sonny Mayo leaps and bounds around, in-between pulling off some classy lead break work. There’s even an opportunity for photographers to join the band on stage, as Crane moves a monitor to make way for those agile enough to clamber up.

The set features ‘Jesus Rode a Harley’, ‘Panhandlin Prince’ and ‘Tomorrows World’ mixed-up with a number of new tracks including ‘No One Survives’ and ‘Devil’s Paradise’. I’m pleasantly surprised at just how ballsy the material is. Whilst I can put a date stamp on a few numbers I recognise from way back then, I’d suggest Ugly Kid Joe aren’t here to simply jog memories, because they are quite capable of running a while longer – should they choose to do so.

Crane shows respect to the Black Country, citing it as “the home of Led Zeppelin, Black Sabbath and all things metal”. He has the place bouncing from beginning to end, encouraging everybody to jump, clap and sing-along, continually splitting the audience for competitive cheering, and having the house lights up for a number of songs including ‘Cats In The Cradle’ which brings the loudest vocal participation of the night.

An encore of sorts sees the band not actually leave the stage, but stand like statues, silhouetted in low-light, as the crowd go barmy as requested by Crane. “Would you like one song or two?” he asks. The obvious answer leads us into a version of the massive 1992 hit ‘Everything About You’, followed by a brilliant cover of Motörhead’s ‘Ace Of Spades’ – rounding off the Californian’s impressive set. 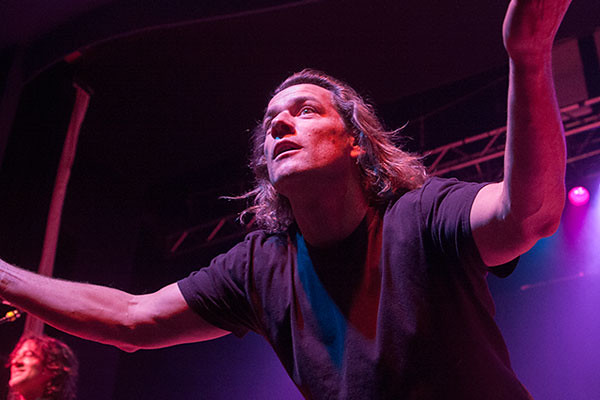