Having the legend that is Iggy Pop on the Foo Fighters line-up is a bit of a coup and I have to wonder how many of those here today would otherwise get the chance to see a punk rock icon.

Not only is it just fantastic for Iggy to be on the bill, but back in June when Dave and Co. cancelled their Wembley dates, he released a statement saying he wouldn’t be playing any replacement shows. So, no matter who knows how lucky they are or not, it’s good to see so many super-excited faces in the Milton Keynes crowd, all revved up after Royal Blood and awaiting the godfather of punk.

There was a time when Iggy Pop would be described as a fireball of pure sexual energy, for his outrageous, unpredictable stage antics and antagonism. In 2015, at the age of 68, he maybe a little weathered, he may not be quite as agile as he once was, but I’ll tell you what – the fire hasn’t burnt out yet.

Straight into Stooges era classics ‘No Fun’ and ‘I Wanna Be Your Dog’ Iggy twists and contorts himself around the stage and out into the audience along the access ramp. Microphone flailing above his head, he remains pretty much in control, apart from perhaps not considering the security team who stand out of sight below the edge of the ramp. Nobody gets clobbered but there’s a definite near miss.

Waving out to those along the back of the Milton Keynes Bowl: “The cheapo people!” he cries out. “I love you .. I’m cheapo too, look how old my jeans are!” This is the first of numerous absurdly funny remarks that he makes, all mixed up with some simple sentiments from the heart.

“I’m Iggy. It means everything for me to be here!” he says before launching into his 1977 classic ‘The Passenger’, followed by the equally recognisable ‘Lust For Life’. It’s an immeasurable pleasure to watch and listen to these songs being executed with such levels of energy, excitement and humour, yet you still can’t ignore a distinct edge that exists within this maestro’s performance.

There’s no stopping a man possessed from blazing through top picks from a back catalogue which includes ‘Skull Ring’, ‘Five Foot One’, ‘Wild One’ and ‘Nightclubbing’. Taking time out to introduce his band and chat to the crowd, it’s a show to savour. Finishing up with ‘Some Weird Sin’ and ‘Mass Production’ it’s a set that nobody in their right mind really wants to end. But alas it has to.

“I wanna thank the Foo Fighters for letting me play ..” says Iggy “.. this is a cool joint.” Indeed it is Iggy, and made all the more so with your presence. 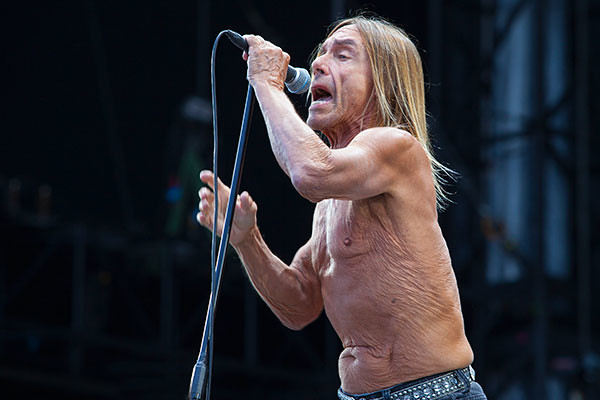