On a cold December evening at Birmingham’s Barclaycard Arena there’s a warm glow of expectation, for tonight is the much anticipated co-headline show from nu-metal titans Korn and Limp Bizkit.

As we wait for Limp Bizkit’s entrance – a scruffy Jeff Bridges look-alike walks on stage. Oh no, my mistake, that’s Fred Durst! In my defence, the last time I saw Limp Bizkit was at Sonisphere in 2011, so with Durst embracing the bearded look and a fishing hat replacing his standard red baseball cap – it’s an initial shock, quickly laid to rest as the lyrically “fuck” ladened ‘Hot Dog’ gets this nostalgic, nu-metal party up and running.

We’re transported back to turn of the century with ‘Rollin”, the lead single from 2000’s ‘Chocolate Starfish and the Hot Dog Flavored Water’. From that album the majority of the set is spawned and along with it the arena becomes a sea of bouncing delight. Durst responds to horns held aloft: “What does this mean?” he asks – like he didn’t know. As strange as the question is, at least he confirms “It looks cool!” His own white gloved, middle finger salute is probably also meant to look cool, or perhaps that’s aimed at us in the pit, or just for our benefit. Who knows?

As always (apart from his 2001 – 2004 hiatus of course) the focal point for any Limp Bizkit show is Wes Borland. Partly stationed at his crazy, elaborate mic stand, the high-energy guitarist is dressed and painted, head-to-toe in white. OK, so it’s not one of his most outrageous outfits of all time, but he still looks the dogs wotsits and through the likes of ‘My Generation’, ‘Livin’ It Up’ and ‘My Way’ puts on a great performance.

With ‘Eat You Alive’ being the only post 2k tune played tonight, it’s obvious that Limp Bizkit are still more than capable of going out and smashing it with those millennium welcoming anthems. “I wanna see everybody bounce!” says Durst, and from the tiered seating of the Barclaycard Arena, looking down to the floor, I sit and watch wave after wave of allegiance to his request.

At times Durst is quite conversant, being one of very few American artists that I’ve heard refer to Birmingham without that annoying “HAM” pronunciation. Giving a nod towards the second city’s musical history with a mention to Black Sabbath and Duran Duran and thanking the crowd for their support, he sets about the task of connecting with his audience in a laid back manner before hitting them hard when it matters. “Let me hear you say shut the fuck up!” leads us into the first half of ‘N 2 Gether Now’.

There’s an amusing back and forth argument between Durst and Borland as the front man suggests to the crowd that “The beers are on Korn!” which Borland is quite keen to ensure isn’t taken seriously. After a blitzing version of – still probably one of the best covers of the time – George Michael’s ‘Faith’, the pair continue their squabble, prior to a super cool and tumultuous airing of ‘Break Stuff’.

An extended intro to the Mission Impossible derived ‘Take a Look Around’ gives Durst chance for a meaningful outro: “Ladies and Gentlemen. Thank you. We are Linkin Park!” getting him off to a laugh, before he talks about the world being “fucked up right now” and how great it is to feel the positive energy in the arena. The song kicks in and (not for the first time already tonight) the roof is almost ripped off.

Remaining on-stage to say goodnight, along to Simple Minds ‘Don’t You (Forget About Me)’, I’m thinking don’t worry boys – on tonight’s showing – it’s going to be a long time before anybody does forget about you. Now, away you go and let’s see what Korn have to offer. 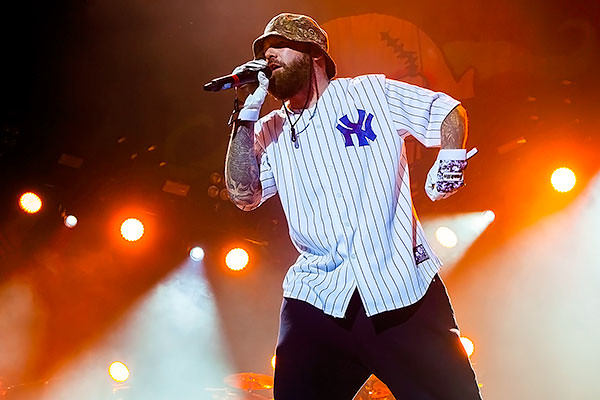