To celebrate their first new studio material since 2015, post-punk icons Killing Joke are out for their first UK run in over three years, on their ‘Honour The Fire’ tour.

Support comes from Anglo-American four piece, The Imbeciles who deliver a surprisingly varied set of post-punk edginess. Amongst their anarchic murky tones comes some rockier riff-laden goodness. To describe them as “confusing” may sound like a negative, but it’s meant in a good way. The Imbeciles are certainly interesting enough, and with the latest album ‘Imbecilica’ produced by Killing Joke bassist Youth (aka Martin Glover), they are a band to investigate further.

Used to great effect by Swedish metal band Ghost, it’s Jocelyn Pook’s satisfyingly creepy ‘Masked Ball’ that gets Killing Joke underway. From Stanley Kubrick’s psychological swansong ‘Eyes Wide Shut’, if ever there was a piece of music to set a tone, then this is it. The unsettling and haunting composition does well to submerge and prepare you for what is to come.

Adding Dr. Jaz Coleman and his thousand yard stare to the equation really gets things going. Heading into the timeless, gothic masterpiece ‘Love Like Blood’ and primal stomper ‘War Dance’; the intensity generated is astonishing. Dressed in his trademark black boiler suit, Jaz prances and contorts like a pantomime villain. The overwhelming feeling is to prepare for a night of glorious 80’s nostalgia, now set to be whipped up and spewed out.

Regarded as pioneers of industrial rock, the live experience with Killing Joke gives perspective on why they were the inspiration for two generations of punk and metal bands. During a huge set, Jaz & Co. offer up multi-dimensional slabs of beauty, such as ‘I Am The Virus’, ‘Requiem’, ‘Primitive’ and ‘Mathematics Of Chaos’. With Geordie Walker’s grinding guitar rhythms, thumping bass lines from Youth and Big Paul’s tribal drumming, this is stuff which paved the way for so much musical progress during the 80’s.

‘The Death & Resurrection Show’ is probably one of angriest sounding songs ever written. From the second of their self-titled albums (2003) featuring Dave Grohl on drums, it’s an insanely brutal live number. The sonic injection of such an epic track shows that angry young men can turn into angrier old ones. From the same album comes the equally aggressive and rhythmically charged ‘Total Invasion’ and ‘Loose Cannon’, before ‘The Wait’ and ‘Pssyche’ end the show.

For over 40 years Killing Joke have remained ritualistic, uncompromising and influential. While they have been sustained and protected throughout by the fire in their hearts, tonight was a privilege, to honour the fire with them. 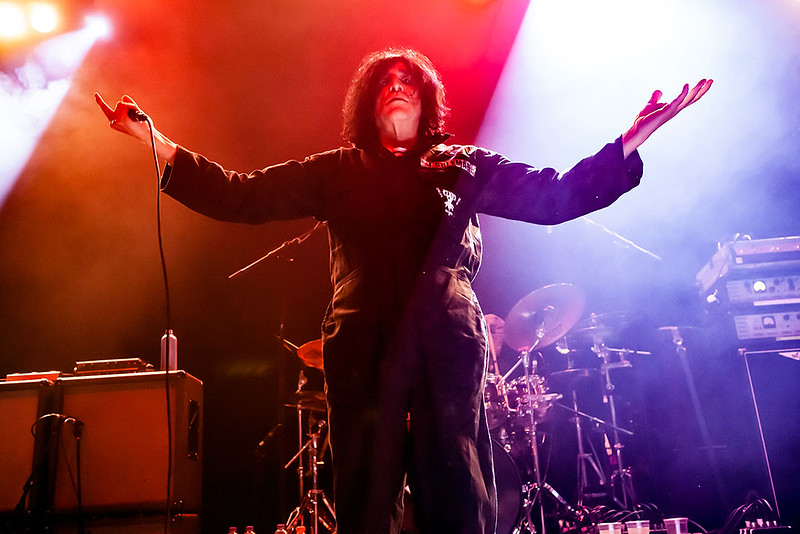