With the recent release of their twelfth studio album ‘The Serenity of Suffering’ – godfather’s of the nu-metal  genre – “KoRn” roll into town on their co-headliner tour with Limp Bizkit.

When nu-metal came about in the late 90’s, early 00’s, there were plenty of bands who divided opinion, but in my experience Korn were always accepted and regarded by most as the standard-bearer of the scene. A fan of their first four albums, it was around this time that I began to lose track of what they were doing, and I never got to see them live. That is until catching half of their set at Download earlier this year, and it was that experience which brings me to Birmingham tonight.

Following a fully pumped co-headline set from Limp Bizkit which really had the place rockin’ – and “rollin'” as it were – the Californian nu-metal heroes have their work cut out to re-invigorate the Birmingham crowd. ‘Right Now’ and ‘Here to Stay’ do a pretty good job, but why-oh-why Korn feel a cover of ‘Word Up!’ is a good idea, when so many other tracks from the catalogue could have made that spot – I really don’t know.  But anyway … “This feels good!” screams a kilt-wearing Jonathan Davis. “I love the fact we can do this shit all over the world with da Bizkit!”

There’s no doubt about it, it is a show for non-sceptics with both bands giving it their all, and Korn certainly turn up and prove their worth. Munky and Head belt out a mix of fat rhythmic guitar riffs and metal thrashing madness, with new tracks ‘Rotting In Vain’ and ‘Insane’ thriving on the staple Korn sound while approaching it from a different angle. ‘Coming Undone’, ‘Y’All Want a Single’ and ‘Make Me Bad’ have Fieldy switching between lumbering and cycling bass lines, along with drummer and relative new boy Ray Luzier completing the groove.

Davis has the bagpipes out for ‘Shoots and Ladders’ which at the end includes a blast of the end riff from Metallica’s ‘One’. But the moment of the night – when an entire arena audience are brought together – is at the start of ‘Blind’. From the gradual build, we all know it’s going to happen, and happen it does – on the scream of “Aaaare Yoooou Readyyyyy?” *spine tingle*.

With a powerful, faultless vocal throughout the entire gig, JD retains that genuinely disturbing sound of angst. After reminding us that the killer second album ‘Life Is Peachy’ is 20 years old, we get him at his absolute best. First up, the improvised scat which forms ‘Twist’, followed by the earworm that is “Why don’t you get the fuck out of my face, now!!” in a massive version of ‘Good God’. This maybe the end of the main set, but it’s the highlight for sure.

As they return with ‘Falling Away From Me’ and ‘Freak on a Leash’, the only real disappointment of the evening is how quickly it’s all done. It’s not that I don’t understand the format and timings of a joint headline show, but I’m hoping the next opportunity will be a headline tour of their own.

Everything that is great about Korn comes across in the live arena. The powerful, heavy bottom end, their solid hooks and melodies, not to mention the diverse range of sounds, styles and experimentation, but you definitely want and need to hear more than eighty minutes worth. 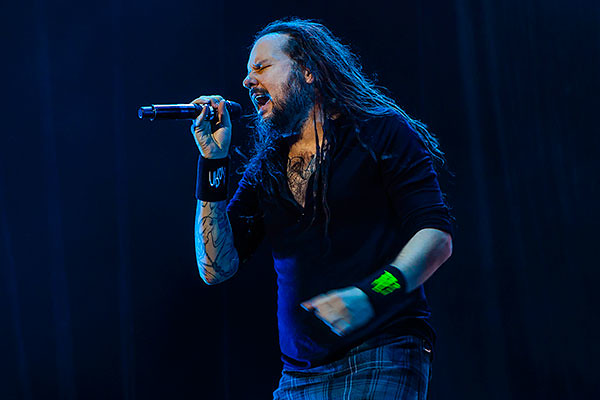