There’s no doubt about it, we live in turbulent times. Death on our streets, mob rule running riot at the latest football bonanza and the deafening cacophony of the will sapping propaganda that our politicians seem to be justifying their existence with lately, it’s all too much.

There has to be an escape, and tonight The Assembly in the gentle spa town of Leamington provides such a haven as the fabled Testament bring a truckload of Bay Area thrash metal to sleepy middle England. The heat in the venue is already so stifling that the notion of a “warm up” act seems, at the very least, superfluous. Nonetheless London lads Savage Messiah do a good job of pushing the mercury up even further.

As we await the arrival of part of our metal heritage to the darkened stage, incense is burned and waved around by the crew, presumably to dispel any unwanted negative energy from the band’s workspace. It appears to be a valid move because as the Berkley thrashers stride out and launch into ‘Over The Wall’ it’s clear that there will simply be no room for any other energy in this place tonight, other than the splendid intensity that Testament has made their stock-in-trade for the last thirty years.

Chuck Billy, the epitome of the eternal teenager, calls the pit to order and we’re off headlong into ‘Rise Up’ and ‘The Preacher’. During the latter Billy produces an inflatable soccer ball which he bats out into the crowd. It’s an impressive swing that might suggest a career at his local ball club The Oakland A’s may have beckoned if this thrash thing hadn’t worked out for him.  Presumably the ball was intended to last as a bit of frivolity, but instead it’s instantly devoured into the mosh and is never seen again – it’s that kind of pit!

There is no false start or ramping things up over a couple of numbers, this is balls out from the get go, and it’s exactly what we’ve come to expect from these guys – tight, pulverising, perfected aggression. That’s all you’re gonna get and it’s all that any Testament crowd wants.  The cheesy boyish grin never leaves Billy’s face as he mimics the swift, maniacal fretwork of his comrades on his microphone stick (it’s definitely not a stand!). Perhaps somebody should put a real guitar in Billy’s hands, but not in this band, because the laser precision of Messers Skolnick and Peterson have got that covered in spades.  These guys are surely amongst the most accomplished dual guitar combos in the business and they miss nothing, seemingly pushing and goading each other to greater heights.  Glorious.

The old school classics are rammed into our faces, Billy declares ‘Legions of the Dead’ to be a love song, surely a stark warning to any ladies looking to get aboard the after show tour bus party.  Billy knows how to command the pit dogs, there’s no division in this society, he leads and they follow. He winds them up, conducts and agitates them, until he finally lets them off the leash with their song, Testament’s tempest anthem to them all: ‘Into the Pit’. The response is rabid and brings a whole new meaning to the term “free movement of people”.

Bassist Steve Di Giorgio, surely one of the coolest cats in metal, strolls nonchalantly around the stage, almost a casual observer at times, until you notice his fingers snaking effortlessly over his strings. It is he and drummer Gene Hoglan who ensure the BPM never drops below Defcon 1 and provides the base for all this wonderful mayhem. ‘DNR’, ‘Dog Faced Gods’, ‘More Than Meets the Eye’ all contribute to this brief history of Testament. All are gulped down eagerly by the mob until ‘Disciples of the Watch’, another fitting tribute to the faithful, brings it all to a frenetic end. We’re left panting, breathless, contented, replete.

Billy lets it be known that Testament hasn’t been to these shores anything like enough and that they would return soon. The fans will be here waiting, ready to go again as they have been for three decades.  The fans reflect the band – Testament by name, Testament by nature. 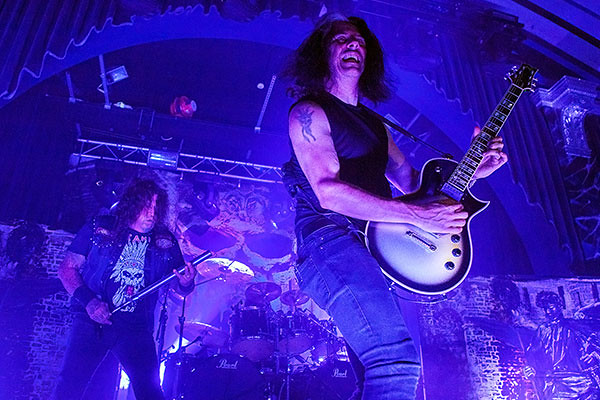