It’s the third and final day of Hard Rock Hell’s tenth anniversary party. While there may be a few sore heads around Hafan Y Mor holiday park today – the HRH community is slowly but surely up an’ at ’em, ready to do it all again.

For a slice of everything good about 70’s rock wrapped up in a present day package, I had been advised to catch Aussie four-piece Cherry Grind first thing today. As it happens the head was willing, but unfortunately the body was not, so I missed them, and eventually made it down to the main arena for SOiL.

SOiL
Added to the bill late on, after Fastway pulled out due to a member needing a hospital procedure, Chicago based nu-metallers SOiL take up an early slot on the main stage. These guys have been around for 20 years, but like many others – before this Saturday lunch time – I’m only familiar with the awesome single ‘Halo’ from their 2001 album ‘Scars’. “We’re gonna play some old shit and some new stuff” says Ryan McCombs before the band breakout a strong, gritty set. ‘The Hate Song’ and ‘Amalgamation’ from the 2013 album ‘Whole’ are the newer tracks, with the latter being a breathless lyrical torrent for McCombs’s throaty delivery. He has plenty of banter in-between songs, raising a smile explaining he is drinking ice water rather than booze this time of day, and his belief that both god and his mum see him as a “short dickhead with a microphone”. After ‘Black 7’ and ‘Unreal’ he asks the crowd how familiar they are with SOiL and “that song Halo.” The response is a plea for it to be played, and eventually it comes, with McCombs ending up in the audience and the room shaking, every voice singing every word of the chorus. Back out for a storming cover of Lead Belly’s ‘Black Betty’, SOiL have the last day of Hard Rock Hell 10 well and truly up and running.

Bernie Marsden
This is not my first time seeing Bernie Marsden and with the added bonus of Neil Murray on bass in a packed out main arena at Hard Rock Hell, there was never a doubt about this being a good show. From Leadbelly’s ‘Linin’ Track’ – the opening number from Marsden’s most recent solo album ‘Shine’ – and the Mississippi Sheiks cover ‘Sitting on Top of the World’, through his own material such as ‘Strictly Latino’ and the rocking ‘Kinda Wish She Would’ – the first half of the set is just about marvelling at this guys consummate playing ability and those luscious guitar tones. There’s plenty of name-dropping stories and a good dose of humour throughout, but it’s not until those classic Whitesnake tracks happen that the entertainment value really peaks. Firstly, ‘Fool For Your Loving’ with the Coverdale introduction “Here’s a song for ya!” Marsden tells us about a recent conversation with DC where he was asked “Are you still playing my songs?” to which he replied “Yep, are you still playing mine?” It’s one of several anecdotes worthy of being audience to, never mind the joy of hearing the Bobby “Blue” Bland cover ‘Ain’t No Love in the Heart of the City’ and Snake originals ‘Walking in the Shadow of the Blues’ and ‘Here I Go Again’ which the entire audience sings, sending tingles down the spine. With a tribute to Gary Moore and Marsden’s version of Jimmy Rogers ‘Walking By Myself’ at the end, the HRH crowd give what is probably the loudest appreciation of the weekend. This wasn’t the good show that I’d expected, it was a great show.

Living Colour
How excited is Hard Rock Hell for funk metal pioneers Living Colour? The answer, is very, and with it a full-house goes bonkers as the creative fusioneers hit us up with ‘Middle Man’ and ‘Desperate People’ both from the 1988 debut album ‘Vivid’. Looking very dapper, strutting the stage dressed in cap and coat, front man Corey Glover must be very warm, yet he’s oh so cool. “Things have got very interesting in America” he says, before starting a chant of “Fuck Trump! Fuck Trump!” launching into the relevant as it ever was ‘Ignorance is Bliss’. With the infectious bass lines of Doug Wimbish and drumming of Will Calhoun – it’s impossible not to get your own groove on through tunes like ‘Funny Vibe’ and the awesome cover of the Notorious B.I.G song ‘Who Shot Ya?’ (check it out on YouTube!) Along with Vernon Reid’s lightning guitar work and Glover’s captivating vocal, Living Colour continue to combine their personality with artistic diversity. They have a venue full of hands in the air and the place bouncing along to the song they are probably best remembered for ‘Cult of Personality’ before an all too short set comes to a close. With a Roosevelt-esque proclamation Glover jumps into the pit, laying his hands on all those gathered: “The only thing to fear, is fear itself!” he shouts, before an epic version of The Clash’s ‘Should I Stay or Should I Go’ takes us to the end. During the goodbye’s Vernon Reid wishes Hard Rock Hell a happy birthday and Doug Wimbish promises a return next year with the new album ‘Shade’. Now that is something to look forward to.

Ginger Wildheart
Stepping into the breach after Glenn Hughes was forced to cancel his entire UK and European tour, Ginger is having a busy day after an earlier appearance with his international noise pop band Hey! Hello! There have been obvious signs of Wildhearts fans on site all day and the overall turnout for his second show highlights the popularity of the Geordie rock icon. “I’m standing in for my good friend Glenn Hughes.” he says. “He might have a better voice, but I’ve got a better band…” which is no word of a lie, when today’s line-up includes ‘Random’ Jon Poole (The Wildhearts, Cardiacs, The Dowling Poole) and Jase Edwards (Wolfsbane) making up a triple header guitar formation, along with Hey! Hello! bassist Toshi running around stage like a lunatic for the duration. Having a party on-stage which transcends into the sea of appreciation before them, Ginger & Co. deliver a grand mix of solo material, or as the man himself describes the set: “Songs you’ve never heard.” Backing vocalist Givvi Flynn takes up lead vocal on ‘Petit Mort’ showing her own exceptional talent, while multi-instrumentalist Jon Poole jumps behind the drum kit for The Wildhearts class toon-age ‘Geordie In Wonderland’. There’s plenty of fun with ‘Can’t Drink You Pretty’ and a version of Silver Ginger 5’s ‘Too Many Hippies (In the Garden of Love)’. Ultimately it’s a really lively performance in a convivial atmosphere ending with The Wildhearts frenetic classic ‘Suckerpunch’ which sends the participating crowd into overdrive before leaving them breathless. Not only did Ginger save the day with the disappointing omission of Glenn Hughes but he brought something to Hard Rock Hell which “the voice of rock” simply couldn’t have matched.

RATT
After too many years of legal wrangling to mention and a line-up arriving at Hard Rock Hell further to drummer Bobby Blotzer’s announcement that he had taken control of the RATT brand and would take his band on tour in 2016, my expectations for this current incarnation are not set too high. However, I’m always willing to throw an old dog a bone and as the stage goes dark to the sound of James Brown’s ‘Living in America’ I allow my hopes to be raised. The band eventually hit the stage with ‘Back for More’ and ‘Lovin’ You’s a Dirty Job’, during which there are sound issues, Mitch Perry’s guitar cuts out and Brad Lang’s bass strap comes away, finding himself stranded and in need of assistance. It’s not a great start to be honest. But anyway, technicalities aside, I recently read an interview with Blotzer claiming that vocalist Joshua Alan sounds better than Stephen Pearcy ever did. I have to say that’s a mighty bold claim when aimed at those who remember RATT in their hey-day, and with no disrespect to the lad, after the first few numbers, it’s clear that he’s no Pearcy, not by a long chalk. He talks about celebrating 30 years of the classic album ‘Invasion of Your Privacy’ and gives his own interpretation of ‘Lay it Down’ and ‘You’re in Love’. and it’s at this point that there are a number of obvious walk-outs, heads simply shaking at what is being heard. Yes, there are people enjoying the show and yes the band can play well – of course they can, it’s a bunch of vets including Stacey Blades of L.A. Guns, but it’s now that I realise my expectations have sadly been met and I find myself leaving the gig. Sticking my head back in to hear ‘Lack of Communication’ and ‘Round and Round’ – two massive songs from the 1984 debut album ‘Out of the Cellar’ – the only way I can describe the experience is a shortfall in the delivery. It’s a shame, but that’s how it is. When Blotzer says for [real] fans “it’s just about wanting to hear the music of RATT” I’m afraid for many that just doesn’t work. Not for me and not for a good proportion of the audience at Hard Rock Hell anyway.

Molly Hatchet
There was never any intention to watch a great deal of Molly Hatchet’s show. I’m not a big fan of southern rock, and with it now being 1.15 am and a 40 minute over-run, not to mention the three and half hour drive home – I’m losing the will to keep it together. That said, I’ve known the name for my entire existence, so intrigue keeps me hanging on just to watch the first part of their set. And you know what – I really like it.  A bit of boogie rock, a lot harder than I was expecting is just what I need a) after the disappointment of RATT and b) to wake up before the journey home. I’m sure there are long-time fans, plenty of history and many opinions about a band of 40+ years, but for me – for twenty-five minutes or so – Molly Hatchet are a good end to my Hard Rock Hell weekend and there seems to be plenty of folk in agreement. With vocalist Phil McCormack shouting “GIVE ME A HELL YEAH!” and wild-haired guitarist Bobby Ingram strutting and posing during his extended solos, I get to hear ‘Whiskey Man’, ‘Bounty Hunter’, ‘Gator Country’, ‘One Man’s Pleasure’ and ‘Fall of the Peacemakers’ before eventually calling it a night. I’ll probably never go out of my way to listen to Molly Hatchet again, but from what I’ve seen and heard tonight, their redneck, fun-time, rock’n’roll gets a HELL YEAH! from me. 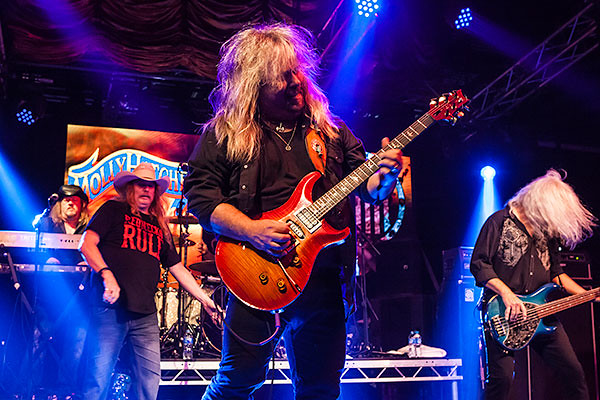 Saturday in the main arena also included appearances from Aussie rockers Massive and Motörhead Guitarist’s Phil Campbell And The Bastard Sons. All in all Hard Rock Hell’s tenth anniversary bash was a roaring success with respect going out to Jonni Davis, CEO and Founder of HRH and all those involved for putting together another fantastic HRH branded event.